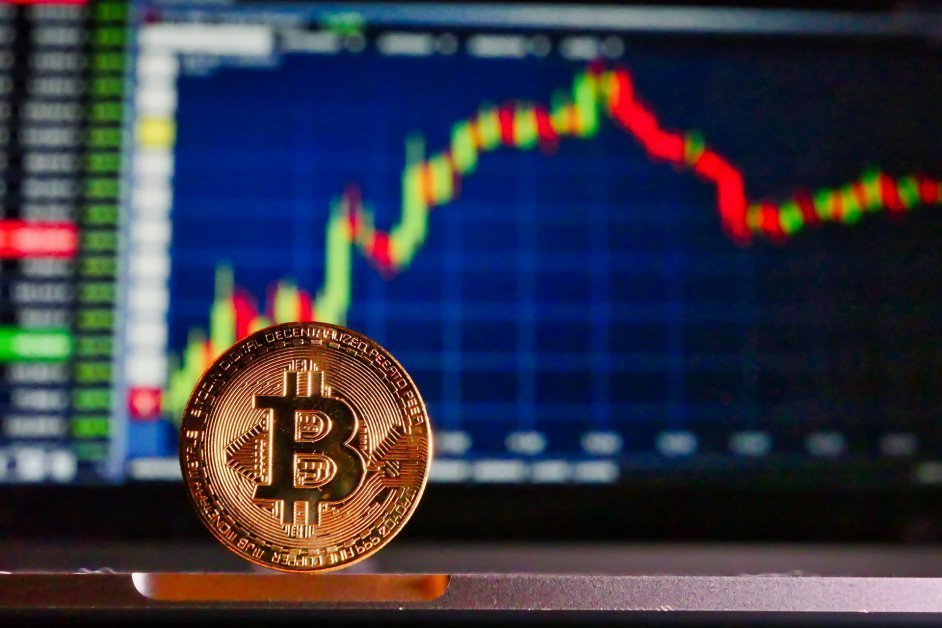 Bitcoin has closed a second green weekly candle despite shedding a chunk of its midweek gains heading into last weekend. The dominant crypto charted a promising uptrend course at the start of last week, breaching $20,000 on Oct 4. Bulls, however, failed to preserve momentum at this height, succumbing to the pressure of holding support at the mark by Friday.

The BTC/USD pair was at writing today hovering marginally below $19,500, where it has retreated. The weekend’s tight range-traded activity is, in some way, a reflection of the bigger picture as Bitcoin has stagnated between $20,400 and $18,800 since Oct 14. 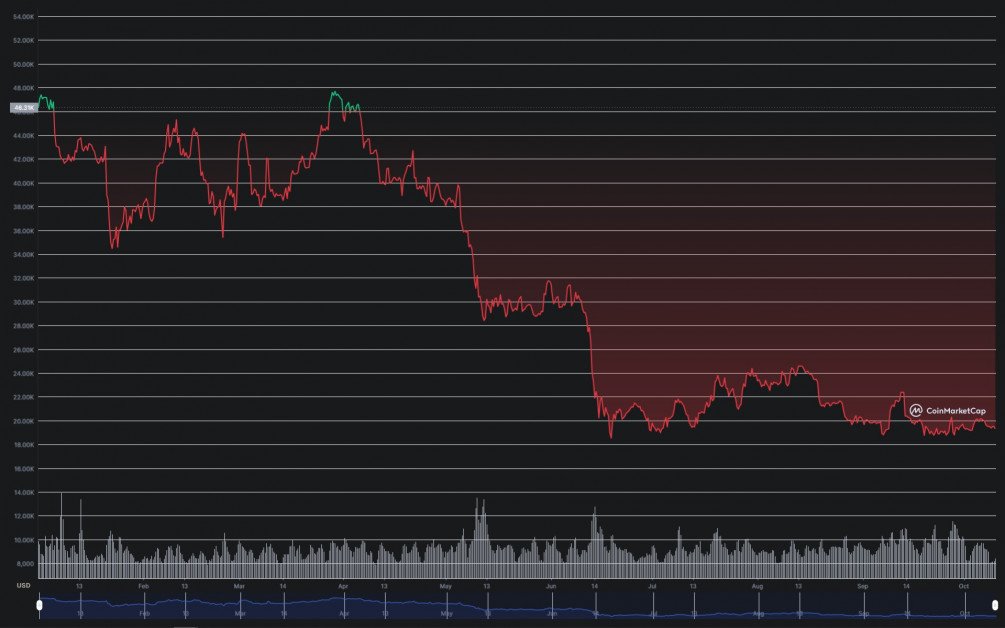 The YTD chart shows that the pair has traded at half – or less – than its price at the start of the year (around $46.31K) for almost four months (17 weeks) since mid-June.

Bloomberg analyst maintains projection of a Bitcoin rally in H2

Some market commentators, including Bloomberg Intelligence’s Mike McGlone, nonetheless believe that the market leader is lining up for recovery in the remaining part of H2. McGlone theorized in the Bloomberg Crypto Outlook report published on Oct 5 that even though interest rate increases are exerting downward pressure on a wide range of assets, Bitcoin has performed better relative to tech stocks and global commodities.

He further observed that Bitcoin is charting its lowest volatility against the Bloomberg Commodity Index.

The senior commodity strategist further noted that Bitcoin is on the path of evolving into “a risk-off asset, like gold and US Treasury’s,” having registered low volatility last month. The forecast of Bitcoin transforming into more like ‘digital gold’ has previously been floated by institutional crypto market data provider Kaiko. The research firm noted in a recent report that Bitcoin’s correlation with the haven gold hit its highest level in over a year while the dollar’s strength has been increasing. 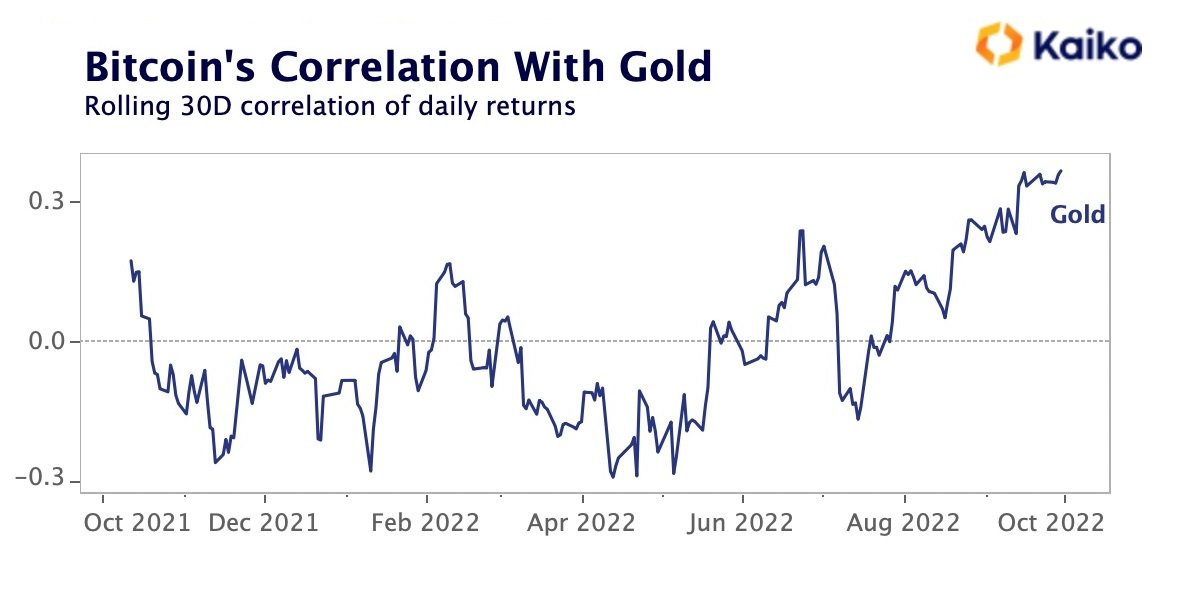 The current BTC price range is notably higher than the average cost basis for whales that have been sitting on their holdings since the start of 2017. The average buying price of this group of holders with at least 1,000 is $15,800, according to market analytics platform Glassnode.

The increase in hash rate has been attributed to several factors, including the aggressive re-equipping by the mining community, which is capitalizing on the currently declining GPU prices.

Sigh of relief for Bitcoin miners

Bitcoin miners have operated under strain for the better part of the year. This was evident, especially in H1, where an array of factors, including the extended bear crypto market, liquidations leading to bankruptcy and rising electricity rates, handicapped the operating environment making it unbearable for some of the firms which eventually went out of business.

The perceived turn-for-the-better in the chip industry following the global chip shortage has helped lower the market prices of graphics processing units. This has made them affordable for the few miners granted Bitcoin GPU mining, which has otherwise increasingly become wound down due to unprofitability.

The mining space has also received support from ecosystem players like mining rig providers. Bitmain, one of the global leaders in crypto mining servers manufacturing, announced in August that it had scaled down the price of its brand Antminer units to lure back miners willing to stomach the current drawdowns in anticipation of mid-term profits. The company’s recent   Antminer S19 XP release has received shouts of being the best in terms of efficiency. Phil Harvey of cryptocurrency mining & infrastructure consultancy Sabre56 described the mining rig as a bargain buy, citing its specification merit.

Ethereum’s merge is another contributing factor to the climbing hash rate figure as the mid-September transition to proof-of-stake (PoS) rendered GPUs owned by Ethereum miners ineffectual. In the face of unpropitious options like exiting the industry, some resorted to trade their equipment while others chose to repurpose them towards Ethereum Classic and, in some cases, Bitcoin mining.

There has been a reasonable concern about the activity of Bitcoin institutional investors. The heightening interest comes less than a fortnight after New York Digital Investment Group (NYDIG) revealed intentions to bet $720 million for its institutional BTC fund. A total of 59 investors participated in the raise, according to the filed documents and figures, which are yet to be reviewed by the SEC.

The filing also didn’t include specific details of when the crypto-focused capital markets company will actually add more BTC to its balance sheet.

“NYDIG’s bitcoin balances hit all-time highs in Q3, up almost 100% year-over-year, and revenue is up 130% through Q2, with another increase when the firm closes its books on Q3. Building on this momentum, [execs] will focus on accelerating NYDIG’s investment in […] Mining Solutions franchise and in its platform technology business, helping banks and non-bank enterprises utilize the Lightning Network,”  the firm reported an Oct 3 PR announcing the promotion of some of its executives.

Other institutional investors like Grayscale have also publicly expressed interest in injecting more funds into the cryptocurrency, albeit targeting a different niche. The digital asset manager unveiled a Bitcoin mining-focused co-investment opportunity on Oct 6. The new arm, Grayscale Digital Infrastructure Opportunities, will venture into the space by taking advantage of discounted equipment prices.

Last week, Arcane Research reported that the Grayscale Bitcoin Trust (GBTC) has continued trading at a discount this year, recently reaching a new peak. Expectations already are that the GBTC will be close-ended for at least three decades which explains the discount figures. The research firm noted in an Oct 4 report that the publicly traded trust registered a discount high of 36.2%, adding that the trust would have to remain close-ended until 2045, going by the figure. 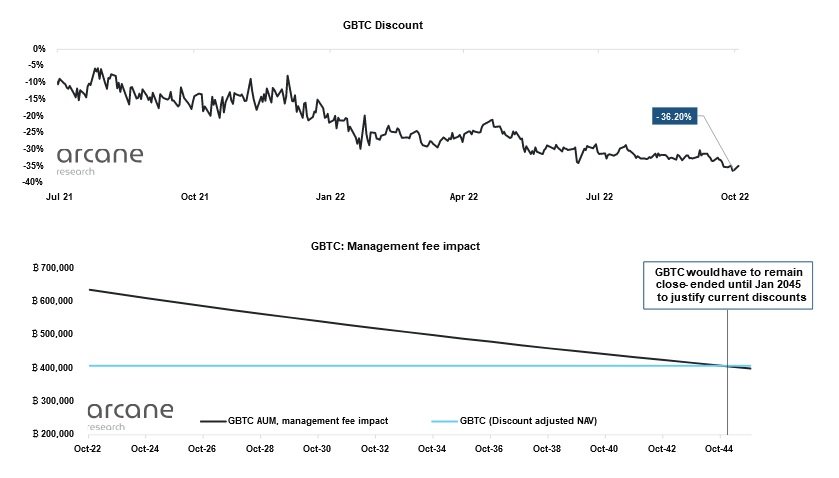 It also projected that working with the hypothesis, Grayscale could have raked up more than 200,000 BTC from the management fee it charges, currently 2%.

Though the declining GBTC discount (implied BTC/USD value of $12,500) naturally presents an opportunity for investors shying from direct exposure to Bitcoin, there is a fair cause for hesitation. Observers have been keen to point out a reluctance of the big guns to capitalize on the same. Arcane’s researcher Vetle Lunde chalked up Wall Street investors’ timidity to either lack of belief in long-term exposure to bitcoin or deliberate disregard of the opportunity.

Lunde also advised that a cocktail of favorable factors, such as a decline in the dollar’s strength and relief in interest rates by the Federal Reserve, could help boost Bitcoin prices. In his opinion, these will potentially lead to the narrowing of the trust discount, translating to profits for investors. Grayscale previously applied to convert its flagship trust into a spot Bitcoin ETF, but the application was rejected. Its executives vowed to challenge the SEC verdict as the asset manager resolutely pushes for the approval of the first of such a product in the US.

Bitcoin as enabling asset that can foster DeFi adoption

EBitcoin.com CEO Dennis Jarvis recently advanced that the leading cryptocurrency can help address the plight of decentralized finance (DeFi) onboarding. The executive remarked in his keynote delivery at the Blockchain Economy Dubai Summit that Bitcoin can help revive the DeFi space, whose reputation has been tarnished by the rise of DeFi instances such as the Ronin bridge exploit.

Jarvis specifically pointed out that Bitcoin is the entry point of many of those entering the cryptocurrency sector. He contends that being the case, there is a need for more awareness on how to swap Bitcoin for other assets. The Bitcoin.com exec added that this path provides a straightforward course for Bitcoin holders and ‘open-minded’ maximalists looking to explore dApps in a multichain environment, which he believes is the industry’s future.