How to Short Bitcoin (BTC) - An Easy to Follow Guide - Securities.io

Learning how to short Bitcoin (BTC) is an essential skill to learn if you intend to become a professional crypto trader. Notably, shorting is an advanced investment strategy that comes with a high level of risk. However, if you master the skill, you gain the ability to acquire massive returns during times of market value decline.

What is Short Selling?

Short selling is an investment method that allows you to benefit from drops in the price of a particular asset. When an investor speculates on the decline in a tradable asset such as Bitcoin, stocks, or other securities prices, they can gain profits using shorts. In a short sale scenario, you bet against the price of the asset in question.

Why Would You Want to Short Bitcoin?

While in the long term it’s easy to see that Bitcoin continues to see price appreciation, there are endless reasons to short this cryptocurrency. The market is volatile and rather than letting your holdings sit during times of market value decline, you can sure up your holdings using shorts.

To understand shorting, let’s first look at the industry that created this method, stocks. In the stock market, short selling is a popular investment strategy. To accomplish a short, an investor borrows a certain amount of the stock they believe will decline in value. As soon as the investor receives these stocks, they sell them at the current market value. Once the price of the assets drops, the investor then can buy the stocks back and return it to the lender.

While the asset is different, shorting Bitcoin works in much the same manner. A crypto trader will borrow Bitcoin prior to a foreseen market drop. As soon as the investor receives their Bitcoin, the assets are sold. After the value of Bitcoin completes its dip, the investor repurchases Bitcoin with the original sales funds.

Because the price of Bitcoin is cheaper than when you borrowed it, you can repay your loan and keep the difference in the repayment and your total trading actions. Here is a specific example of shorting in action.

Jeremy then repurchases Bitcoins using the $60,000 he held from the initial sale of his holdings. Since the price of Bitcoin dropped $2,000 apiece, Jeremy receives six Bitcoins for his purchase. He then returns the five Bitcoins to the lender. The last Bitcoin is his profit.

Jeremy can sell this Bitcoin and keep the $10,000, or he can use his earnings to make other investments. Had he not shorted the market, he would only show losses in his portfolio. Even if he had traded his assets out to stable coins, he would only make the difference in price from his original holdings and the value drop. Instead, he 5x his ROI using this advanced trading method.

How to Short Bitcoin?

Shorting Bitcoin is easier than ever today. The first step is to locate a reliable platform that permits leveraged trading. These platforms specialize in high-risk shorting investment loans.

Importantly, you will need to pay back any loan you take, plus fees. If you borrow ten Bitcoin, you’ll need to have those coins back when it’s time to repay your loan. To ensure that you fulfill your promise, these platforms require users to put up a deposit, or margin.

Your margin requirements act as a form of collateral or security. These holdings back your position with the goal to ensure the shares will be repaid at the agreed-upon future date. If your short starts to go awry, your lender can, and most likely, will call your margin in. Most platforms only need to provide you with a quick notice to do this. For these reasons, it’s imperative you read all the fine details of your Bitcoin short agreement.

Today, there is a variety of ways to short Bitcoin. Each of these techniques provides its own advantages and disadvantages. You must consider the entire situation before you decide on what strategy best suits your needs.

One of the most popular ways to short Bitcoin is through the use of CFDs. CFDs allow you to short Bitcoin without purchasing any coins directly. Instead, you sign a CFD and agree to just pay the difference between the price of the asset at the time of your loan and your contract rate. CFDs are popular because they are more convenient and cost-efficient because there is no need to make additional purchases.

How to Short CFD

Use one of our recommneded CFD Brokers that offer CFD trading services. You will need to create an account to get started. Luckily, the process is simple. Notably, you must verify your identity and account via an email before you can use the platform.

Once you are all set up, shorting is simple. All you need to do is open a trade on the BTC/USD instrument. Next, you need to select “Sell” from the options. You will be brought to a screen that will allow you to set up all of the details of your CFD. It doesn’t get easier than that. Best of all, most CFD brokers feature an advanced interface that is easy to navigate. Form here, you can stay up-to-date on all the market’s developments.

There are many exchanges in the market today that offer shorting services. Most of these platforms allow you to leverage your shorting strategy. Leveraged shorting is the act of borrowing more Bitcoin from the exchange than you hold prior to your sell-off. 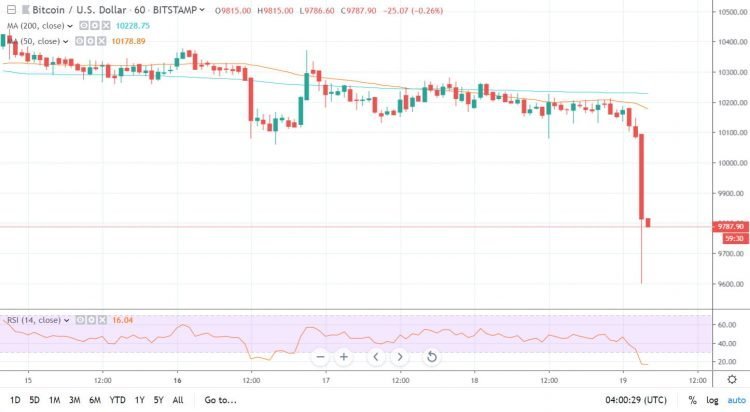 Leveraged trading is one of the riskiest strategies in the market. It takes a firm understanding of the market conditions and your investment. Additionally, you really need impeccable timing to be successful with this strategy. If the exchange feels as if your investments are going to sour, they will close your trade early, keep your margin, and make you repay your loan.

Understanding When to Short

There are certain times when shorting Bitcoin is more complicated than others. For example, shorting Bitcoin against long-term uptrends can be tricky, to say the least. Bitcoin has a way to slowly rise in value. Reversely, this digital asset can shed thousands of dollars in market value in minutes. These scenarios put into perspective why shorting can be difficult for new investors to complete successfully.

Understanding the Mentality of the Market

It’s also important to consider the mentality of other traders in the market. If you short Bitcoin, and suddenly the price starts to shoot up quickly, you will need to rush to repurchase your assets. Unfortunately, every other investor who made the same decision will seek to accomplish the same task.

This sudden drive to repurchase Bitcoin drives the market value up sharply. When this scenario plays out, it’s what is known as a short squeeze. Short squeezes add to your losses in this position. To avoid this scenario, you must be vigilant in your market assessments.

The Bitcoin market has nine years of trading data to back it up now. A quick glimpse at the past of Bitcoin and you can easily see scenarios that initiated major sell-offs. The more you understand these scenarios, the easier it will be to identify the next major sell-off in the market. Here are some of the main reasons Bitcoin prices stuttered in the past.

Since the crypto market is still in its early stages, there is still a lot of regulatory uncertainty surrounding this industry. In the event that a major country bans or enacts some anti-Bitcoin stance, the market will adjust accordingly.

History has shown that major exchange hacks can tank Bitcoin prices in minutes. One famous example of this scenario playing out was during the Mt.Gox hack. At the time, Mt.Gox was the largest Bitcoin exchange in the world. Its hacking sent Bitcoin prices spiraling downwards for months.

Hard forks occur when the community behind a crypto project is split on a certain upgrade. In a hard fork, some of the miners refuse to change over to the new protocol. This creates two separate blockchains from the moment of the fork moving forward. Consequently, hard forks also create a rift in a coins support community.

Bitcoin prices saw a decline when the community split over transaction block sizes. The row eventually led to the creation of Bitcoin Cash. Today, both coins have a strong following in the market.

There is another update related scenario that can drop the price of a digital asset. When important upgrades see considerable delays, it can cause a loss of faith by investors. This loss of faith demonstrates itself in negative price movements.

Bitcoin saw some significant price drawbacks when developers postponed the SegWit update. SegWit reduced the size of transactions in an attempt to combat market congestion on Bitcoin’s blockchain. At the time, the network’s congestion was unbearable. Consequently, every delay was met with negative price movements.

Another major development that can hurt a coin’s price is the exiting of a key member from the platform. Blockchain developers are in high demand. The top programmers are respected throughout the entire industry. When one leaves a project, it can symbolize the beginning of the end for a coin. It can also represent a shift in the coin’s primary functionality moving forward. Either way, investors don’t like to see these guys go.

There are also future scenarios that could occur that would affect Bitcoin’s price negatively. For example, if the cryptographic hashing algorithm of Bitcoin is broken, the coin will become unsecured and its market value will plummet. Along the same line of thought, major coding exploitations could also cause investors to lose faith in this cryptocurrency.

Regulatory changes in the market are perhaps the biggest threats to Bitcoin prices. In the past, major countries, such as China have put heavy pressure on the market. In 2017, China banned all exchanges and ICOs in the country. These actions dropped Bitcoin’s price sharply following the news.

Bitcoins anonymous creator Satoshi Nakamoto has remained in the shadows for the last couple of years. In the early days of Bitcoin, Nakamoto mined over one million coins. These coins have sat in his wallets since day one. If these coins were to enter the market, the price of Bitcoin would see a huge correction to reflect the added supply.

Short sales are considered a risky trading strategy because they limit gains even as they magnify losses. Shorting is especially risky if the lender calls in the assets before prices have a chance to drop. There are some techniques you can employ to simplify the process, however, none are full proof.

Let’s examine the same example from before using the $12,000 Bitcoins that dropped down to $10,000. In the first scenario the short completed according to plan, the price of Bitcoin dropped and the investor repaid their debts to the lender. Now let’s see what would happen if the price of Bitcoin didn’t drop.

Shorting is a great way to make some extra profits. However, if you are new to trading, or are unfamiliar with the market, shorting is one of the fastest ways to lose your booty. For these reasons, each investor needs to do some soul searching prior to jumping into the shorting market. That being said, shorting is a powerful tool that provides investors with huge ROIs when completed correctly.

Related Topics:bitcoin 101
Up Next

Investing In Bitcoin (BTC) – Everything You Need to Know

How Bitcoin Works – An Easy Guide for Noobs