The term “Central bank digital currencies” (CBDCs) refers to cryptocurrencies issued from Central Banks. These virtual versions of their fiat counterparts leverage blockchain technology to provide the world’s currency issuers with more efficiency, control, and security. Consequently, more countries than ever plan to introduce some form of CBDC into their markets in the coming years.

CBDCs are blockchain-based financial instruments that bridge the gap between traditional cryptocurrencies such as Bitcoin and your everyday fiat currency. Importantly, there are many analysts that believe CBDCs are a critical step in the journey to full-scale cryptocurrency adoption. As such, these hybrid funds provide confidence to people interested in cryptocurrency adoption but worrisome about the lack of safety measures in the market.

Importantly, there are numerous banks currently building the systems for holding and transacting with cryptocurrencies such as CBDCs. As more banks explore the possibilities of CBDC integration, there is a strong push to develop cryptocurrency infrastructure. One day, these systems may handle non-bank issued cryptos. It’s these systems that may make it possible for all cryptocurrencies to integrate into the economy seamlessly one day.

Central Bank Digital Currencies share some important aspects with traditional cryptocurrencies such as Bitcoin and Ethereum. For one, they utilize blockchain technology to facilitate speedy transactions and monitor market activity. Consequently, CBDCs function very similar to your normal cryptocurrencies. 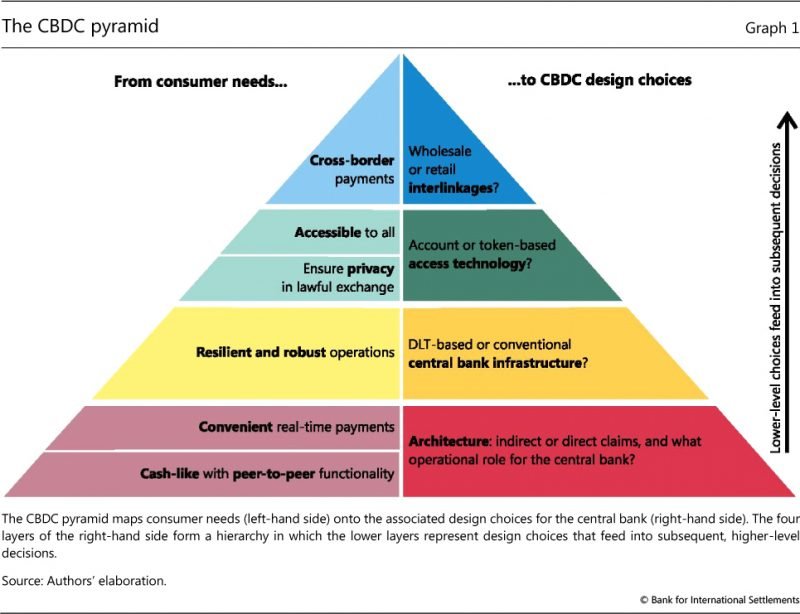 Every CBDC project underway now shares some common aspects with its counterparts. For one, these digital currencies are always issued from a centralized organization. As such, their transactions are not immutable and can be deleted, altered, or refunded depending on the Central Bank’s requirements. Additionally, all CBDCs set to enter the market in the foreseeable future are meant to supplement some form of fiat currency.

Importantly, CBDCs are meant as a means to improve on traditional fiat currency. They provide a more seamless user experience without detracting from their fiat counterparts. This strategy is in stark contrast to the many decentralized currencies that seek to overthrow the current fiat hegemony.

CBDCs give central banks and regulators the ability to trace and track every transaction in real-time. Importantly, Central Bankers believe this technology could help eliminate money laundering. Since CBDCs provide central bankers the ability to approve or deny any transaction, they could prove to be extremely difficult to use in illegal purchases

Most people never think about the huge amount of funds that go into the creation of more paper money. Not surprisingly, printing money is expensive. In fact, in 2019, the US treasury spent over $1 billion in printing costs. Additionally, despite the introduction of more paper currency into the market, paper currency transactions continue to decline globally. Consequently, this provides Central Bankers all the more reason to cut back on printing.

Along with the huge savings a Central Bank gains from the elimination of printing funds, governments can enjoy faster currency deployments via CBDCs. Many central bankers believe the ability to control the monetary supply at will is crucial during times of economic uncertainty. For example, a CBDC could have been a wise alternative for the US as it began the issuance of trillions of dollars in economic aid during the latest coronavirus relief package. Interestingly, the idea was floated in a preliminary coronavirus aid bill, but it was dropped from the final language over technological concerns and a lack of infrastructure.

Banks gain huge flexibility in the market via CBDCs. Banks can issue, destroy, transfer, and hold all currency on the ledger. In this way, central banks are able to better institute their financial strategies in real-time. These currencies provide banks with the ability to conduct strategies such as quantitative easing more effectively.

As more banks express interest in the issuance of CBDCs, more questions arise from regulators, lawmakers, and users. One of the main issues facing these new financial products is their intangible nature. People are comfortable with a product they can hold and feel. You can do neither of these things with CBDCs. Consequently, CBDCs would require citizens to make major adjustments moving forward. Here are the biggest issues facing major CBDC adoption currently.

One of the main concerns CBDCs face is a worry that their adoption could occur too quickly. These unique financial instruments require infrastructure and legislation to become a legitimate option for the status quo. If a situation occurs where people abandon the fiat currency model to quickly, there could be gaps created while the digital currency develops to fill the void.

The way the banking system functions currently, smaller banks interact with clients and then, central banks interact with these banks. The issuance of a CBDC would upend this strategy. A CBDC would allow bank customers to open accounts directly with the Central Bank. In fact, analysts predict a maneuver such as this would require millions of new accounts directly hosted by Central Banks.

Another major concern over any CBDC upgrade is its effect on the current banking structure. Currently, your local bank charges you fees to host your maintain and protect your banking infrastructure. If customers were to work directly with central banks, it would require a new fee strategy to implement across the market.

One of the major fears behind CBDCs is their blockchain nature. Many central bankers believe that CBDC issuances could have a negative effect on the way people view banks. Some bankers think it would send out the wrong message to account holders as it would legitimize decentralized cryptocurrencies such as Bitcoin. These digital assets are meant to replace the central banking system rather than supplement its capabilities.

Unlike traditional cryptocurrencies, CBDCs have questions surrounding their use as cross-border payment mechanisms. Currently, there’s no standard or exchange rate in place for these blockchain-based funds. As such, Central Banks are uncertain how international conversion rates would apply to CBDCs.

Considering the huge benefits surrounding CBDC adoption, it’s no wonder that multiple countries currently have some form of CBDC research underway. A 2018 study revealed that around 70% of central banks have interests in these centralized cryptocurrencies. Today, these programs lead the way in terms of research and development into CBDCs.

In a 2019 interview, Philadelphia Fed President Patrick Harker spoke on the inevitability of central bank-issued cryptocurrencies. He explained that the advantages the technology introduces to the sector are too great to ignore. Today, his statements ring truer than ever. Here are some international CBDC programs in the works:

Chinese officials are currently involved in the largest and arguably most important CBDC project to date. This year, China began testing its own CBDC network labeled Digital Currency Electronic Payment (DCEP).  Here, the country plans to test out a “Digital Yuan” on the world’s largest population and fastest-growing economy.

Importantly, Chinese officials made the decision to become an early mover on CBDCs after concerns arose following the possibility of Facebook’s Libra launch. In the past, Chinese officials have been harsh towards cryptocurrency users. In 2017, the country closed exchanges and made trading crypto illegal. Since that time, regulators continued to explore ways to leverage blockchain technology without relinquishing any control to the people.

Another early CBDC study came from the South American country, Uruguay. Back in 2017, Uruguayan officials began a pilot program to test the “e-peso.” Importantly, the program concluded in 2018 successfully. Notably, the IMF praised Uraguay’s strategy as forward-looking at the time.

In 2019, to of the wealthiest countries in the Middle East joined forces to develop a CBDC dubbed “Aber.” The project was met with enthusiasm as both countries carry considerable influence in the region. Today, Aber continues testing and could see public issuance before the end of 2020.

Interestingly, Turkey turned to CBDCs for another reason. The country’s regulators believe that CBDCs could help its Central Bank better control inflation. The “Digital Libra” will give Turkey more options and flexibility when dealing with these concerns.

Russia’s central bank began development on the crypto Ruble after its commission by President Vladimir Putin in October 2017. Crypto ruble details revealed that the CBDC will not be minable but its transactions are encrypted. At the time, many saw the decision as a means for Russia to avoid many of the US imposed sanctions the country currently faces.

CBDCs – The Future is Here

Central bank digital currencies (CBDCs) continue to make headlines across the globe. As CBDC development increases, so does its use cases. Every week, more Central Banks look towards these technologically superior currencies as a way to improve their current business systems. As it stands now, any banks not involved in CBDC development face a harsh reality as the market continues to go digital in all aspects.

What is a Digital Wallet?