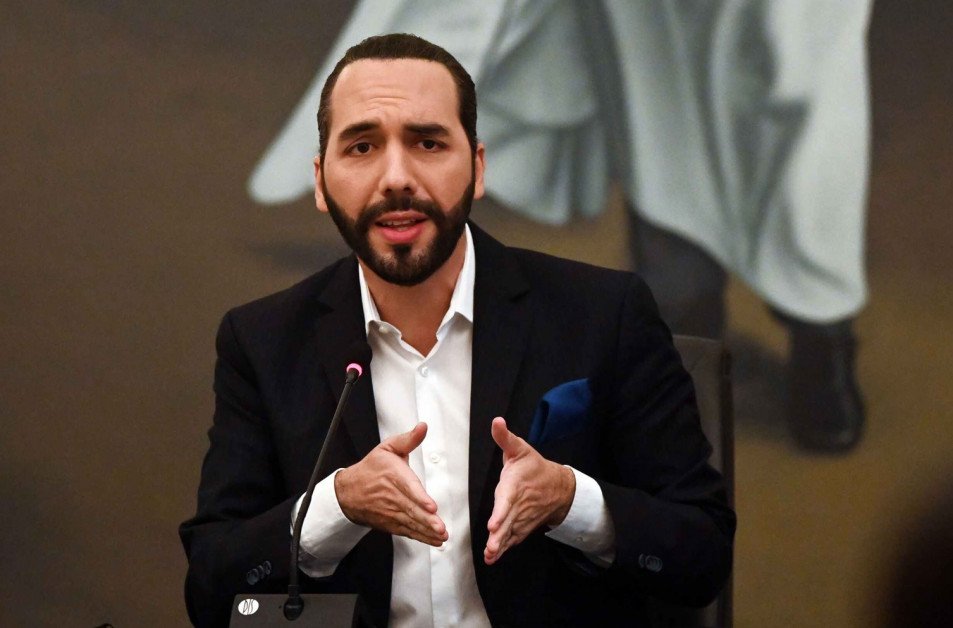 It is exactly one year and two weeks since El Salvador’s national leader Nayib Bukele announced that the country was adopting Bitcoin as a legal tender in a move that saw it become the first, and thus far only, in the world. The decision drew mixed commentary from influential figures in the crypto industry and got censured as well by other governments and financial institutions, including the International Monetary Fund.

It hasn’t been a smooth sailing

The breadth of promises and expectations around a legal Bitcoin tender was extensive. Some Salvadorans were receptive to this novel idea as it would free them from the ‘captivity’ of the US dollar. In contrast, others showed a lack of confidence and understanding of the flagship cryptocurrency. These opposing sentiments still haunt the Central American nation today.

Josué López, a Switzerland-based Salvadoran who owns an investment fund, in June this year communicated his intent to invest $200 million to generate renewable energy. The idea was that power generated from the photovoltaic plant would be used to power the national grid and mine Bitcoin. The residents of Nueva Concepcion, the municipality where the power generation project is to be established, have raised specific environmental concerns over the potential impact of the project.

They worry, especially since the project will require the clearing of 74 acres, according to the Intercommunal Association of Water and Sanitation of Nueva Concepcion. Moreover, mining Bitcoin will possibly require huge amounts of water to cool the rigs. This will impact the locals as they are largely subsistence farmers. There’s still a disconnect over Bitcoin in the Latin American nation.

To achieve economic autonomy, President Bukele initiated efforts to start decoupling from the dollar with the Bitcoin decision. One year on, the haunting of the dollar hasn’t stopped. The idea of Bitcoin as a hedge against inflation has been debunked, at least for the time being, as the Satoshi coin has equally suffered alongside a somber stock market. 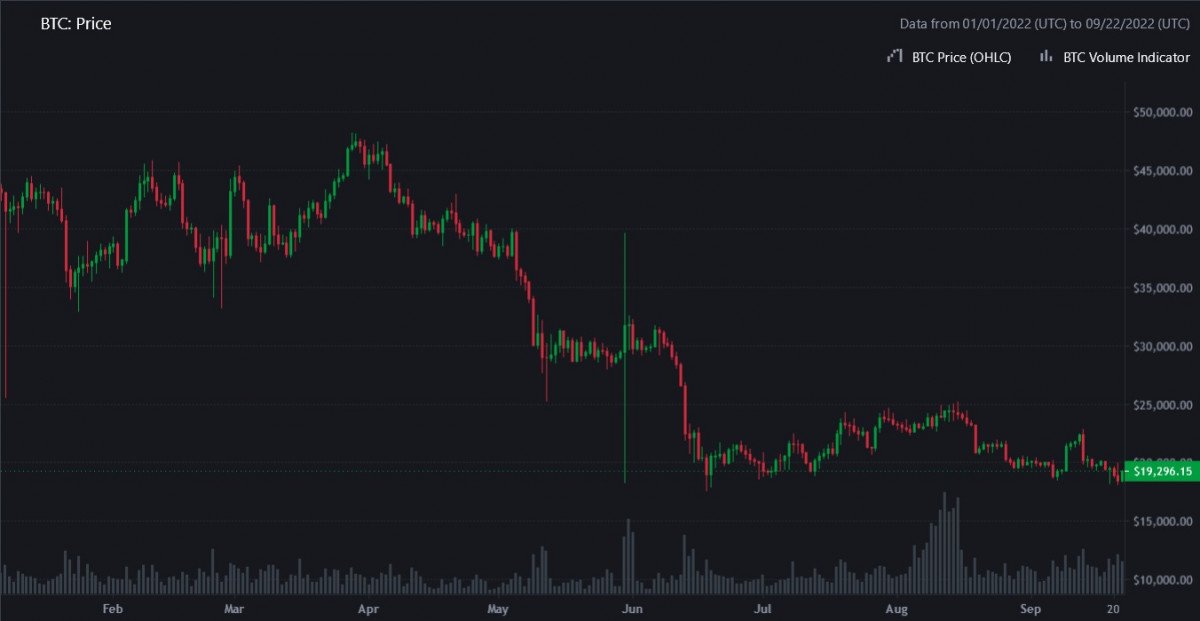 The price action of Bitcoin (BTC) over the last dozen months proves this, as the asset has hemorrhaged a significant chunk of its value. A portfolio tracker of El Salvador’s holdings showed -57.12% returns in value over the said period at the time of writing. 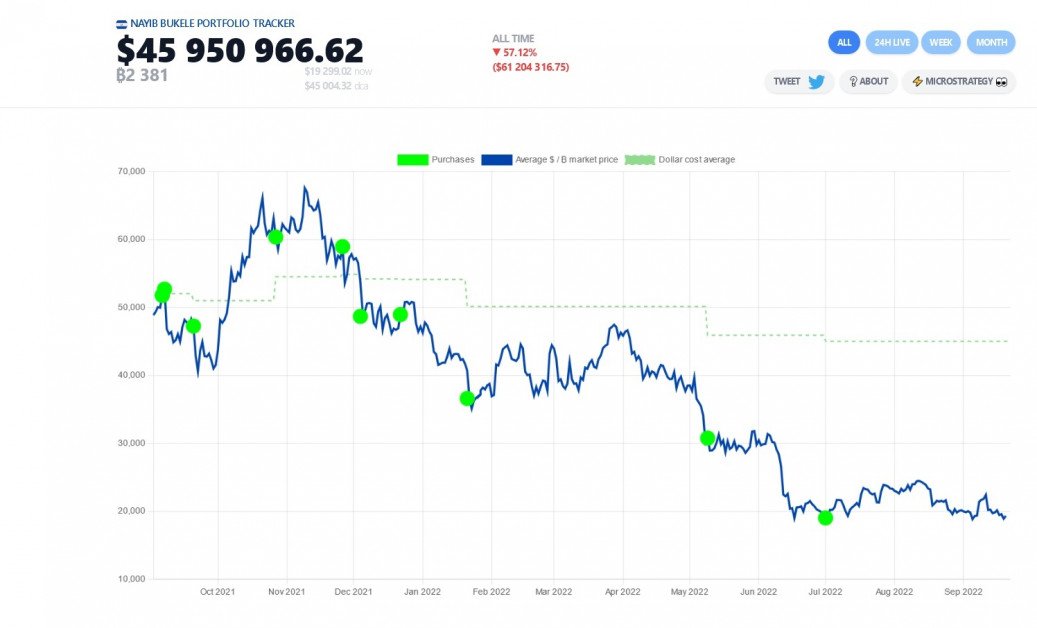 All purchases of Bitcoin the country has completed since September 2021 have cut value, barring the 80 BTC it added in July – it accrued 1.49%. President Nayib Bukele’s Dollar Cost Averaging strategy worked conveniently to give El Salvador exposure to crypto. The underlying fault is that most Bitcoin was bought at peak prices, not envisaging the current 72% decline from the all-time high.

To learn more about Bitcoin check out our Investing in Bitcoin guide.

Concerns over the opacity of El Salvador’s Bitcoin

President Bukele has received all sorts of criticisms in the past year, but the Bitcoin advocate is maintaining a cool head. Adoption is the foremost headache there is. Though the government tried incentivizing citizens to take up Chivo, the official Bitcoin and Dollar wallet, its utility did not take off. The locals simply haven’t put their money in the idea of Bitcoin though the law has enabled its use for payments of taxes and settlement of payments.

Beyond Salvadorans’ lack of enthusiasm for Bitcoin, there is disquiet over the government’s opaque management of its crypto. The Central American Institute for Fiscal Studies has called for dropping Bitcoin as a legal tender, arguing that the adoption hasn’t borne any tangible benefits.

President Bukele is shutting out the negativity. Even with the widespread questioning that the Bitcoin decision has received, he’s remaining positive. He recently suggested that he will soon coin an op-ed asking the community to ‘Stop Drinking The Elite’s Kool-Aid.’ Bukele has only been spreading optimism about the initiative. He retweeted a post by Bitfinex Chief Technology Officer Paolo Ardoino, who is a believer in El Salvador’s Bitcoin stance. Ardoino sees Salvadorans as brave in defining their own path of freedom using Bitcoin.

For all things that observers can say have gone wrong, there are some positives. Alejandro Zelaya, the Finance Minister in the country, notes that Bitcoin has boosted access to financial services for a large sect of the unbanked population in addition to encouraging international investment.

The central bank says that the country’s attractiveness to crypto has grown significantly; there are 59 crypto and blockchain firms in the nation currently. In April, El Salvador’s Tourism Minister Morena Valdez remarked that the tourism industry had grown by 30%, on track to break pre-pandemic levels. She attributed this partly to the use of Bitcoin as legal tender.

A major expectation of a Bitcoin legal tender was the promise of a Bitcoin city. The project was expected to come into fruition in March via a public rollout of the debt offering but owing to snags, the city is yet to launch. El Salvador has blamed the delays on the ongoing war in Ukraine, a diminishing risk appetite, legislative deferments, and unimpressive Bitcoin prices.

Paolo Ardoino of Bitfinex, which is to list the Volcano Token, has indicated that approval of the digital securities law to establish the offering could still come before the end of the year, conditional on El Salvador having the necessary stability to pass it.

Bukele, who assumed the President’s office in June 2019, has been the biggest champion of El Salvador’s Bitcoin policy. With his term ending in 2024, there have been concerns about the project’s continuity. Celebrating El Salvador’s 201st Independence Day last Thursday, Bukele announced in his livestreamed speech that he would seek another term as a candidate in the next elections.

While some received his announcement with excitement, his critics lambasted his ambitions as unconstitutional. The reproach is based on the fact that El Salvador’s constitution doesn’t explicitly allow for consecutive presidential terms. Last year, the country’s Supreme Court controversially ruled that presidents can seek a second term. The ruling was condemned by many, including the US State Department. The re-election bid, which would violate more than four constitutional articles according to legal experts, is perceived as a display of undemocratic rule and dictatorship.

Related Topics:bitcoinBitcoin Newsel salvador
Up Next

Bitcoin Struggles Around $19K Ahead of Weekend: Here’s Why BTC Investors Should Remain Confident

Bitcoin Stalls Around $20K: All Eyes on Europe’s Energy Crisis and Plunging Euro