Bitcoin Miners Yet to See Relief as Mining Difficulty Rises to a New Peak - Securities.io 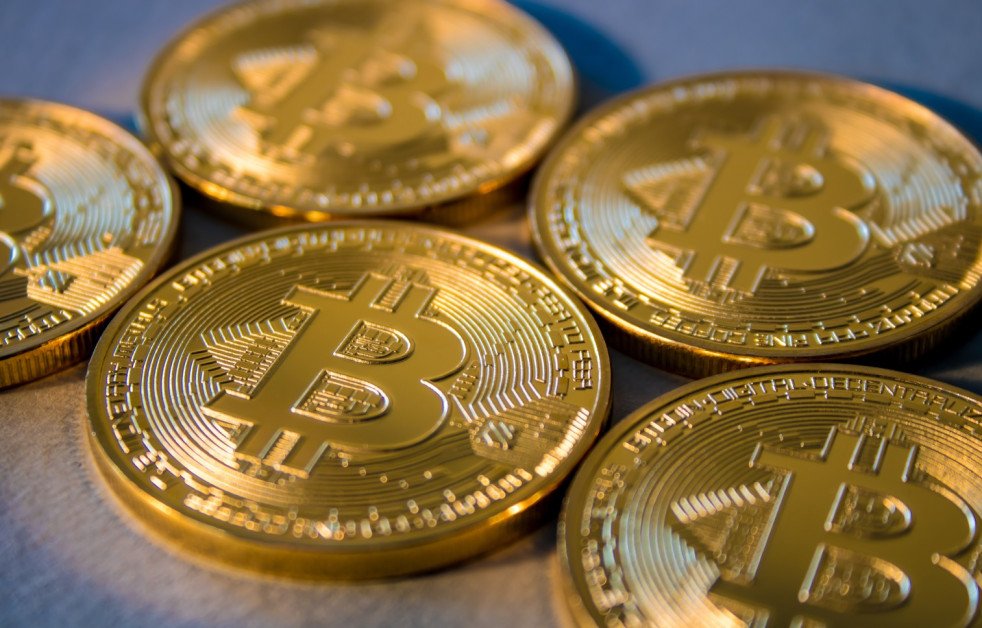 The latest Bitcoin mining adjustment observed on Monday (Oct. 10) saw the network’s mining difficulty peak at a theoretical complexity figure of 35.61 trillion. The new difficulty figure represents an increase of 13.55% from Sept.28 and marks the most significant adjustment – miners overcome to solve valid blocks – since May 2021.

Data from Blockchain.com data showed that the 7-day average hash rate peaked at 266.583 million tera hashes per second (TH/s) on Oct. 12. The estimated number of TH/s the bitcoin network was performing at writing was 263 million – nearly twice the figure (143.35 million TH/s) at such a time last October. 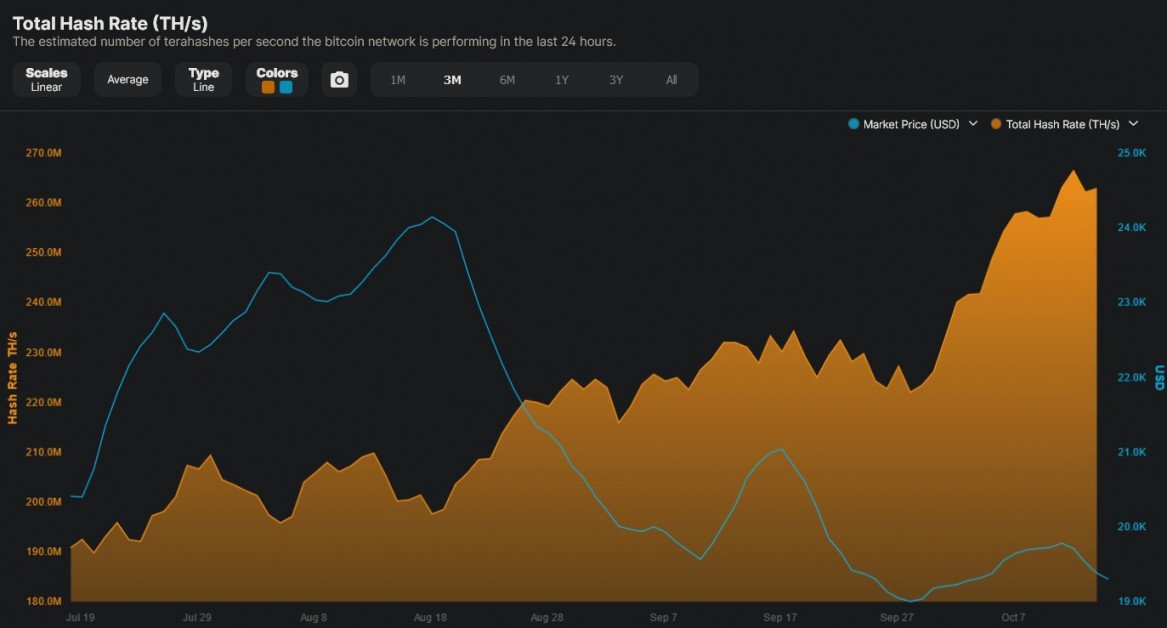 This consistent uptrend tracing back to August indicates that Bitcoin network builders are undeterred by the bear market and struggling prices. The increasing difficulty can be viewed in positive light according to Scilling Digital Mining CEO Mark Morton, who opines that the current conditions are “very positive for the [network’s] security,” especially coming during a bear market cycle.

The worst is not over for miners

From an institutional perspective, the adjustment bodes ill for mining companies and firms generally invested in the niche. Most have already been operating through near-intolerable conditions for the better part of the year.

“The next difficulty adjustment suggests that miners are still finding sufficient profit margins to turn on new machines and are likely capitalizing on plummeting machine prices,” Morton remarked on the subject.

Poor Bitcoin (BTC) prices, an overwhelming bearish climate, and rising energy costs have made profits thin or non-existent. In August, US electricity rates went up by 15.8% year-over-year, while September figures show a 15.97% increase. Indeed, several mining firms have been constrained revenue-wise, with those that failed to plan for such an extreme outcome or misappropriated funds likely to bear the brunt of this adverse situation.

“Miners that assumed we would have an up-only market and purchased machines at elevated prices will certainly be feeling the pinch,” the Scilling Digital Mining exec noted.

More miners are joining the network, less are selling their stash

The latest soaring difficulty comes against easing pressure in BTC prices. Glassnode’s Week Onchain Newsletter, published on Oct. 3, reported that miners had taken significant weight off the selling peddle, with 50% fewer coins being sold by miners in a 30-day period stretching to early September. The bulk of this selling activity was by miners who had links with the distressed Bitcoin mining pool Poolin, analysts from the market intelligence and insight firm noted.

The Seattle-based compute power company will track hashrate values via its Bitcoin hashprice index and pay out contracts in USD by default but with an option for Bitcoin. Matt Williams, head of derivatives at th firm, remarked that the Hashprice NDF product will help miners hedge their operations while also offering trading and investment firms synthetic exposure to the Bitcoin mining industry.

“While many derivative instruments exist for miners to hedge their Bitcoin price exposure, as well as their power and energy exposure, the space was lacking an instrument to easily hedge their hashrate exposure.”

Bitcoin was spotted hovering at $19,187 at publishing – down 3.26% in the last 24 hours. A dip in BTC price below $18k will exert pressure on miners just as holders and some might resort to even extreme measures like merging and acquisitions. Last month, Bitdeer set up a $250 million to specifically target this angle. 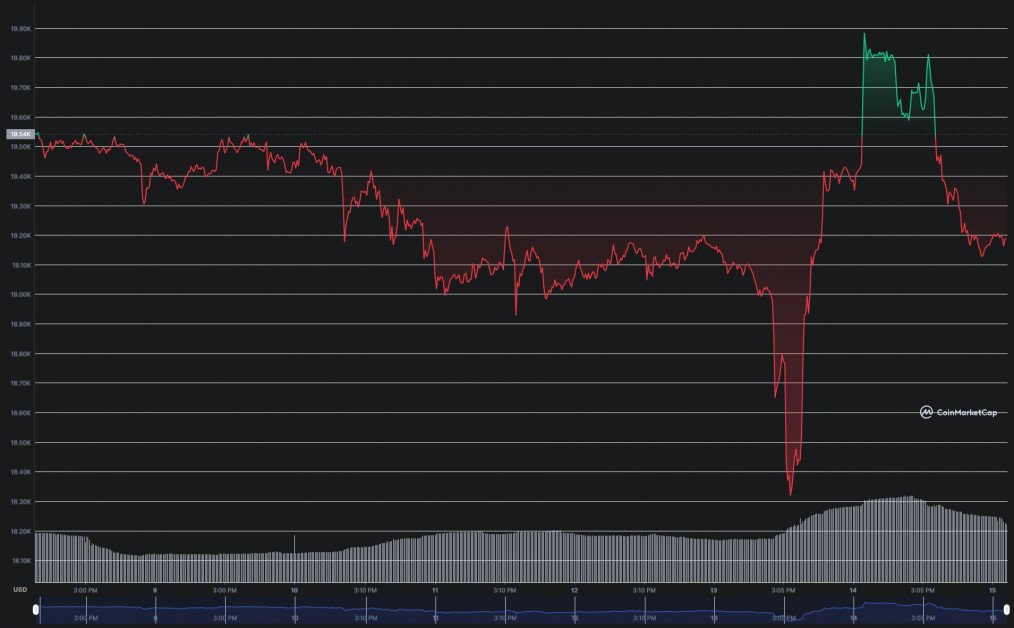 Granted Bitcoin is trading marginally above $19K, its price has shown resilience recently, with positive projections tied around this remarkable relative strength. Glassnode analysts theorized in Wk. 41’s (Oct. 10) edition of the Week Onchain Newsletter that Bitcoin investors could be setting up a bear market floor based on several on-chain metrics, market structure, and overall investor behavior patterns.

The biggest uncertainty is how long Bitcoin remains subdued before tracing a recovery course. On the bright side, the uncomplimentary setting has pushed some miners to take up other approaches to cope, which bodes well for innovation.