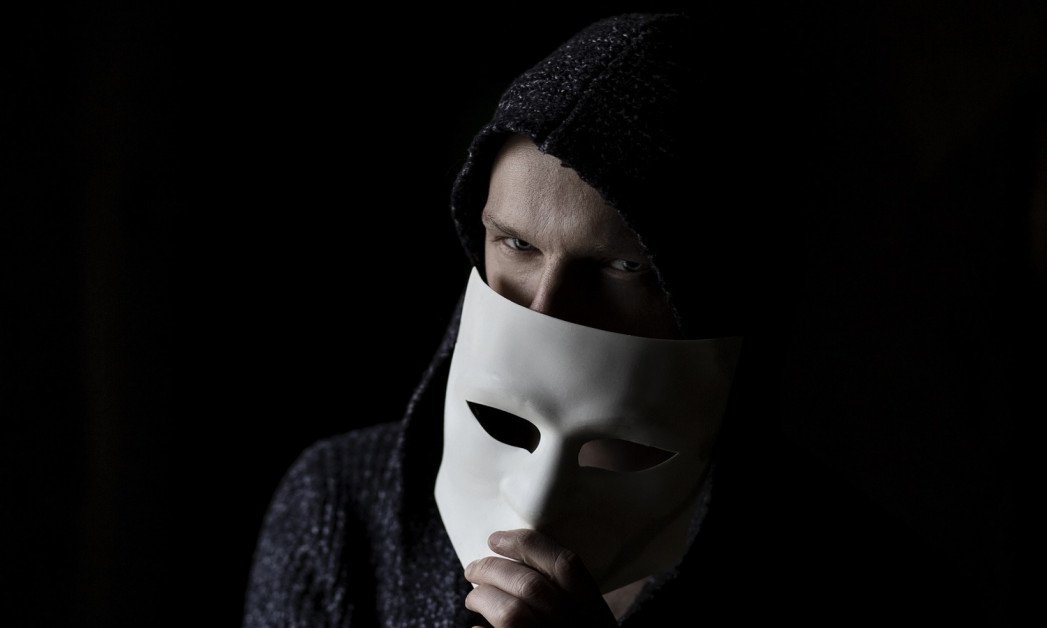 Amidst the ongoing crypto market meltdown, initiated by back-to-back setbacks the crypto industry has had to endure since 2021, another cryptocurrency exchange appears to have bitten the dust.

Before we delve into the matter, let’s turn back the clock to the first half of 2021. This was the time of the Terra-USD stablecoin collapse, which wiped out many crypto firms like Three Arrows Capital (3AC), crypto exchange Voyager Digital, and crypto lender Celsius network.

And this month, an even bigger incident shocked the market as the centralized exchange FTX filed for Chapter 11 bankruptcy protection after reports that its CEO Sam Bankman Fried and a few top executives were involved in misusing user funds. If that was not a massive blow in itself for the crypto industry, the FTX debacle is also leading companies, such as BlockFi, on the verge of bankruptcy.

But the crypto market and users might not have seen the end of it all as the Hong Kong-based Hoo.com has stopped working altogether.

Surprisingly, the matter hasn’t picked media attention due to its relatively smaller size compared to FTX, which used to be the world’s third largest crypto exchange in terms of the trading volume.

According to an official announcement by the exchange made on November 18, the de facto controller of the Hoo is someone named Xu Tong Hua.

Social Media Complaints on the Rise

Many are now complaining on Twitter about the exchange shutting down and running away with funds. However, no one really knows what’s going on with the exchange as they simply disappeared from the map.

There has been no activity on the exchange’s official Twitter account since July 7. Their Telegram channel, meanwhile, was created recently on November 18, which has 244 subscribers, to post this announcement.

As for Hoo’s Reddit channel, which has 10.8k members, the last post was made nine months back, titled “Hoo stealing airdrops.” Users, however, continue to comment under the post even now, along the lines of the exchange being a scammer and stealing their funds.

Now, Hoo users are also complaining on the exchange’s Facebook account. Just two months back, one user wrote, “Stop using Hoo withdrawals are blocked since mid-July,” while another user accused, “Trying to sign in my account, asking for a verification code and it will not send code through.”

With no other options left, users have taken to commenting under the exchange’s previous posts, but the exchange has made no reply so far. Moreover, no data is available about the exchange’s trading volume on CoinGecko or anywhere else.

Hoo is a centralized cryptocurrency exchange (CEX) registered in the Cayman Islands but headquartered in Hong Kong. The project was initially launched in 2017 by Ruixi Wang, but at the time, the project only offered a digital wallet.

When the exchange was still operating, it supported major digital assets as well as lots of less-known altcoins. The exchange allowed depositing fiat via bank transfer but not the credit or debit card and supported six fiat currencies: CNY, USD, KRW, HKD, JPY, and AED.

The exchange, which originated in mainland China, had nearly 1.2 million registered users in 2021, and its daily active users exceeded 50,000, according to Wang. He further claimed that overseas users accounted for 60 to 70% of the total users, covering Russia, Turkey, Germany, Vietnam, Brazil, and other countries.

Now, the exchange is inactive on all social media platforms, and users can’t seem to make any withdrawals.

It was actually back in June this year that the exchange first suspended withdrawals on the back of a sell-off that plunged the digital currency sector into turmoil.

At the time, Hoo.com announced that it was stopping all transactions after being hit by a heavy volume of redemption requests caused by market volatility and liquidations by large crypto institutions, creating panic among users. This came just days after the collapse of Singapore-based crypto hedge fund 3AC.

The exchange later said in a blog post that it would restart transactions within 72 hours so it could “process a large number of users’ withdrawal demands and ensure the safety and accuracy of withdrawal assets.”

According to a Beijing-based media company Pandaily, the exchange later decided to launch a debt-to-token conversion plan and a partner investment plan to quickly solve the problem of cash withdrawal.

Reportedly, the plan was to launch the debt-to-token conversion program on August 1, 2022, and during this in-between period, all user tradings were to be closed. The exchange had planned to open an Innovation zone a few days after the program was launched, and the user’s debt tokens were then to be traded freely.

But that was not all. The local media also stated that Hoo’s senior executives were in dispute. Rexy Wang then said on social media that Fang Wenbin, an employee of the company and the former head of security at the leading cryptocurrency exchange Binance, took advantage of his position at Hoo to delete the company’s office system, which led to domain access failure. On top of that, Wenbin also stole the company’s information and assets, Wang said.

According to Fang, however, Wang had already transferred most of his assets from the exchange and had not even paid employees’ salaries.

The victims of Hoo have actually come together to form an alliance on Twitter called Hoo Victims under the username @rexywang1. The group aims to “assist Police to arrest Rexy Wang ASAP.” 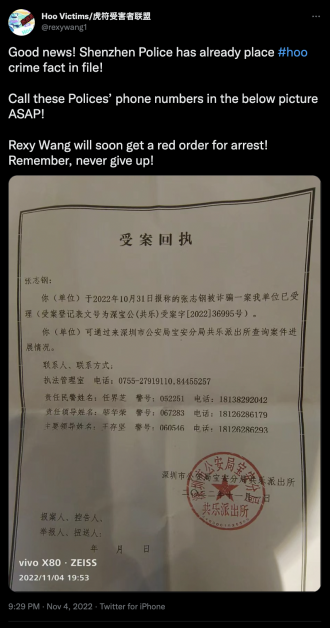 According to a tweet made from the above-shown Twitter account earlier this week, Wang might be hidden in Tibet. In another Tweet, they suggested the victims give Wang a visit to his hometown Cangxian (Hebei, China), saying, “Let everyone in his hometown know what he has done!”

The Latest on BlockFi and Its Chapter 11 Proceedings

Hodlnaut Under Investigation by Singapore Authorities for Potential Fraud