What is Tether? Everything You Need to Know - Securities.io

Tether (USDT) is the world’s most popular stablecoin. As such, it serves multiple purposes in the market making it a core cryptocurrency in many investor strategies. While it may be impossible to envision a crypto market without Tether, this hasn’t always been the case. The Tether project overcame much controversy to make it to the top spot.

Nowadays, Tether helps to provide liquidity and a hedge against market volatility. It’s able to accomplish this task because it is what’s known as a Stablecoin.

Stablecoins are blockchain instruments that have their value pegged to outside commodities.

The advantages these coins bring to the market are undeniable. For one, their stability helps curtail the volatility of cryptocurrencies as a whole. Investors depend on stablecoins as a way to escape bearish markets without converting funds back into fiat currencies.

In most stablecoin scenarios, the token will have its value pegged to a fiat currency. In the case of Tether, USDT shares its value with the US dollar. In essence, 1 USDT is worth $1. Additionally, anyone can choose to redeem their 1$ of fiat currency through Tether Unlimited at any time. 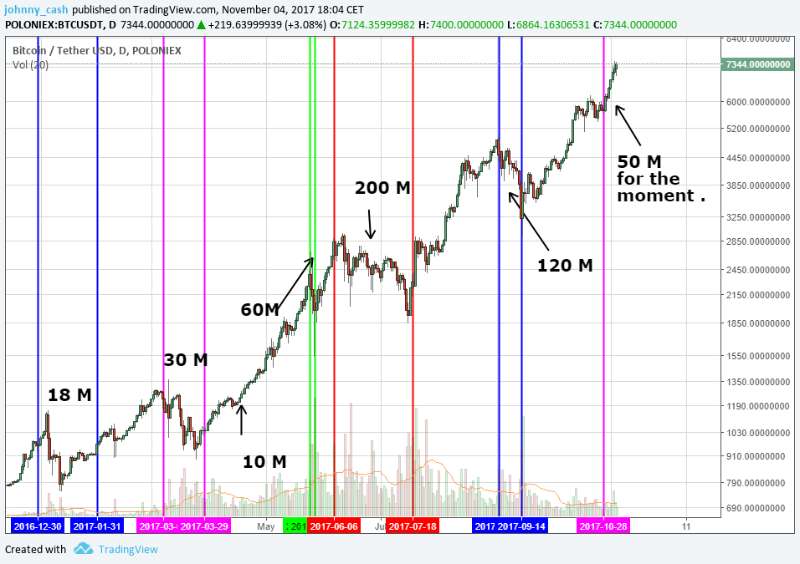 The history of Tether begins with the Realcoin project. Realcoin entered the market via its whitepaper in July 2014. The whitepaper caused a huge stir amongst the community for several reasons. Aside from its revolutionary technical aspects, the paper’s publishers are some of the most reputable names in the market. Specifically, Tethers whitepaper lists co-founders Brock Pierce, Reeve Collins, and Craig Sellars.

Interestingly, the Realcoin name didn’t last very long. In November 2014, the Santa Monica based startup decided it was time to dawn a new title – Tether. Notably, Tether entered the market with a three-pronged approach.

The platform introduced three stablecoins as part of its entry strategy. The first coin was USTether. This token featured a 1:1 peg with the US dollar. The second coin pegged its value to Euros, and the last coin focused on the Japanese Yen, the latter being known as YenTether.

Bitfinex became the first exchange to introduce Tether into its platform in January 2015. Instantly, stablecoins became a success. The exchange saw huge user activity regarding this token. Consequently, Bitfinex became the leading exchange in terms of Tether trading.

It wasn’t long before researchers began to question Tether’s solvency. It was the first stablecoin in the market, and its unprecedented rise to success was not without concern. These concerns led researchers to delve deep into the Tether Bitfinex connect.

In 2017, a group of independent researchers from the International Consortium of Investigative Journalists released the Paradise Papers. This document confirmed some of the worst fears of those in the market at the time. The documents showed that both Tether and Bitfinex shared the same management and corporate structure.

The report went on to detail how the two companies were really more like one conglomerate. The documents demonstrated how the majority of Tether accounts entered the market on the Bitfinex platform. Furthermore, these researchers went as far as to label Tether the driving force behind the 2017 crypto break out year.

Those that credited the inflow of USDT into the market as one of the key factors behind the 2017 bull run began to make their voices heard. Another research paper published the following year titled ‘Is Bitcoin Really Un-Tethered?’ takes an in-depth look at the effects of Tether within the crypto sector.

The researchers behind this paper, John M. Griffin and Amin Shams are well-known academics from the University of Texas. Their research concluded that Bitfinex and Tether worked together to artificially bump Bitcoin prices. The two allege that Bitfinex supplied the market with Tether in a bid to create an influx of liquidity.

These USDTs would then flow into a myriad of cryptocurrencies. However, when the value of these smaller coins would decline, most investors bought back into Bitcoin. It’s these actions, that researchers claim fueled Bitcoin’s epic $20,000 bull run. 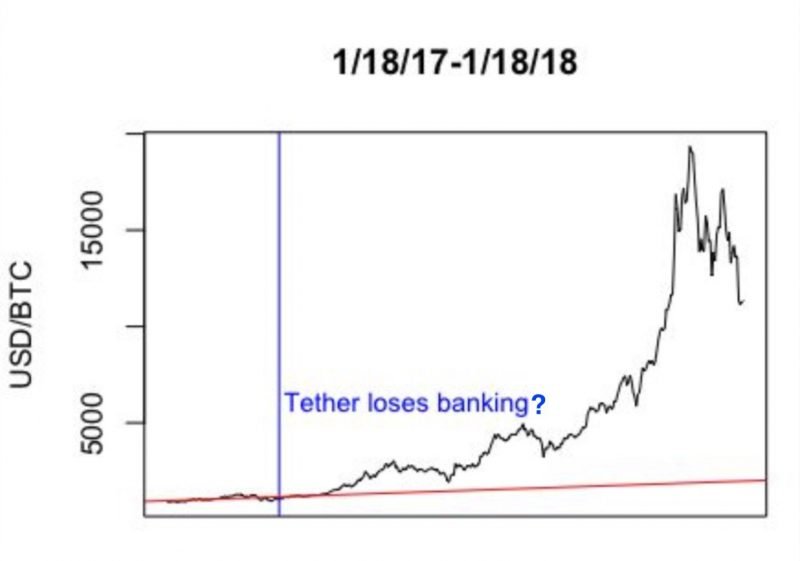 To make matters worst, the researchers were not alone in their assumptions. The creator of Litecoin, Charlie Lee made a Nov 30 Twitter post were he appeals to the market to exercise caution. Specifically, Lee posted:

“There’s a fear going on that the recent price rise was helped by the printing of USDT (Tether) that is not backed by USD in a bank account.”

As the negative press began to mount for Tether, they began to catch the attention of regulators. On December 6 of the same year, the U.S Commodity Futures Trading Commission sent multiple subpoenas to both Bitfinex and Tether. In the subpoenas, the New York Attorney General alleged that Tether illegal allocated funds to cover up to $850 million in losses.

This negative press eventually led the firm’s banking partnerships to exit. In the latter part of 2017, the platforms lost the US Bank and Wells Fargo as banking partners. While this was a major blow to operations at the time, it wasn’t long before Tether found friendlier banking relationships in pro-crypto countries such as Taiwan.

How Does Tether Work?

As USDT issuance got into the billions, these claims came under heavy scrutiny. In March 2019, the company changed the backing of USDT to include loans to affiliate companies. Despite the change, Tether remains the top stablecoin in the world.

USDT is unique in that it functions on the Omni blockchain protocol. Omni is a versatile platform that is most famously known for its Bitcoin anchoring capabilities. Currently, Omni provides this service to multiple firms.

In its earliest days, every Omni transaction featured a dual recording strategy that would place the entry on both the OMNI system and record it in a Bitcoin transaction sharing the same transaction hash.

Today, Omni assets feature pegs on multiple blockchains. Notably, there is an Omni layer of Litecoin. More recently, developers introduced additional ERC-20 variants of the tokens. All of these variations help to further secure Tether and demonstrate its adaptability in the market.

Why Tether is Important

Tether is one of the most dominant cryptocurrencies in the market. It provides investors with additional flexibility as it serves as a dollar replacement on many popular exchanges. Here are just some of the reasons Tether continues to see adoption:

Market volatility is a major concern in the crypto sector. When the bears start to take over the market, investors only have a few options to consider. They can sell their holding and convert them back into fiat. This process is time-consuming and involves the most fees possible. Or they can ride the bear market out and take the losses. Tether adds a third option to the equation. Convert to Tether and avoid the fees and volatility.

Since Tether is another blockchain asset, converting from Bitcoin or any cryptocurrency into Tether is as easy as exchanging Bitcoin for Ethereum. This conversion introduced a frictionless way for investors to avoid volatility and remain in the cryptomarket

As with most cryptocurrencies, Tether has the ability to revolutionize international transaction systems. USDT can be sent anywhere globally without the need to convert funds or pay extra transference fees. The point is that Tether is as easy to send as Bitcoin globally.

Another major advantage of using Tether as a means of payment is accountability. Since its inception of Bitcoin, there has been confusion surrounding its use as payment in terms of accounting. Businesses that pay for goods or services with crypto are often left to estimate the value of their payment against the US dollar. Stablecoins eliminate this concern because they always equal their fiat counterparts.

Importantly, Tether facilitates the transfer of real cash into digital cash. This is a major task in some regions of the world. Remember in some locations it’s a difficult task to convert crypto into fiat currency. In some countries the practice is illegal. For all of these regions, Tether is a smart alternative.

Along the same line of thought, Tether provides exchanges with increased liquidity. This token allows exchanges to forgo dealing directly with fiat currency. In this way, exchanges can reduce the amount of KYC and AML regulations their platform must meet.

After so many successful years in the market, no one can argue the important role Tether holds. Nowadays, there is no shortage of stablecoins in the sector. However, Tether was the original stablecoin that started this revolution. For that, Tether deserves a nod of appreciation.

Where to Buy Tether (USDT)

Binance – Best for Australia, Canada, Singapore, UK and most of the world. USA residents are prohibited from many of the tokens on this platform. Use Discount Code: EE59L0QP for 10% cashback off all trading fees.

BitPanda – This is the best option for European residents. Please note they do not accept residents from outside of this region.

Kraken – This is the best option for USA residents.