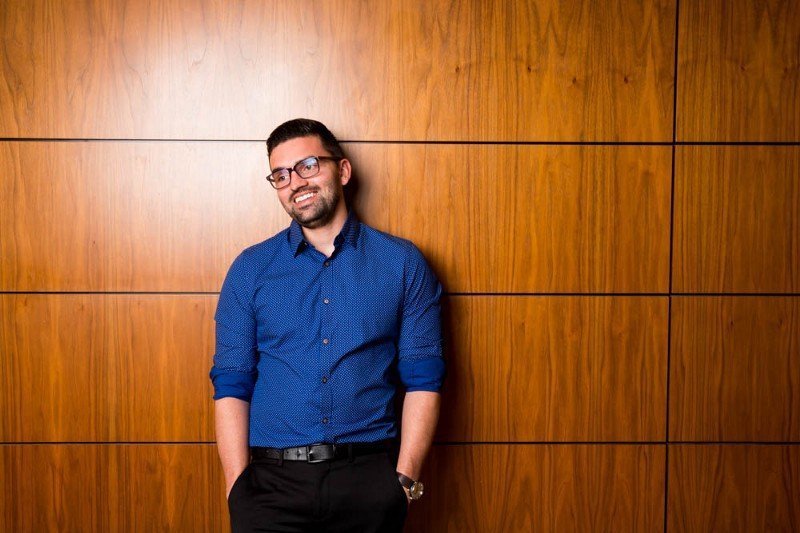 In 2009, Andrew founded and bootstrapped Bizness Apps into a global enterprise all while he was a senior in college. Since then, he has gone on to help more than 500,000 small businesses engage with their customers on mobile devices. Bizness Apps was acquired by a $1 billion private equity firm in 2018.

Gazdecki has been featured in The New York Times, Forbes Wall Street Journal, Inc.com, and Entrepreneur Magazine, as well as prominent industry blogs such as Mashable, TechCrunch and VentureBeat.

We are pleased that Andrew Gazdecki took time off from his busy schedule to discuss his latest project.

AT: To begin with can you tell us a little bit about your project altcoin.io?

AG: Altcoin.io is a decentralized cryptocurrency exchange designed to give the speed and useability of a centralized exchange (like Coinbase, for example), but none of the custodial security risk.

When I started trading altcoins, I quickly realized the most popular exchanges were centralized, taking ownership of their traders’ tokens. This is a huge security risk. By holding traders’ tokens, these exchanges unwittingly invite theft. Since 2011, billions of dollars have been stolen, and I believe people deserve better.

So, Altcoin.io will be the trading exchange of the future – a crypto exchange 2.0 if you like – that is both fast and easy to use, while ensuring traders stay in control of their tokens at all times. With that peace of mind, we hope to see cryptos skyrocket to a trillion dollar market cap in the future.

AT: You recently were successful in raising funds in exchange for equity on wefunder.com. What inspired you to crowdfund on wefunder versus the traditional ICO model?

AG: We didn’t need a token, so why create one to raise funding? Some ICOs have a legitimate purpose, but our exchange doesn’t rely on a token to function. Creating one would simply pull our focus away from building the best crypto exchange in the world to finding a use for a token we don’t really need.

There’s a lot of confusion around the purpose of ICOs. I think they might have fallen from grace for the simple reason that they’re not always appropriate or indeed necessary for a blockchain project to get off the ground. We think our successful WeFunder campaign proves that pretty well.

AT: You decided on the Ethereum blockchain. What made you choose this platform versus EOS, NEO, or another platform?

AG: Ethereum has been around for longer, has one of the largest developer networks, and is actively working on the scalability “trilemma” through sharding, Plasma, and state channels. Other blockchains are doing some cool things, but it’s just too early to assume they’ll outshine Ethereum – or even fulfill their promises.

Importantly, Ethereum appears to be working harder at creating a scalable blockchain that doesn’t sacrifice decentralization. It would be easy to reach scale by simply reducing the number of nodes responsible for creating new blocks, but in our opinion, that’s just centralization in disguise. Once we start eroding decentralization, we lose its benefits.

We therefore believe Ethereum is the right choice for us, and in the future, we hope to support cross-chain token exchange.

AT: What differentiates your exchange from other decentralized exchanges such as Etherdelta?

We believe the problem with existing decentralized exchanges is three-fold: one, they’re hard to use; two, the technology is slow; and three, there’s not enough focus on increasing liquidity.

Altcoin.io isn’t just a decentralized exchange, but an entirely new trading engine designed from the ground up to be safe, fast, and attractive to seasoned and novice traders alike. We’re releasing an SDK to help other exchanges and dApps learn from our experience, and even share liquidity between us.

AT: As we all know security is of paramount importance when it comes to exchanges. What steps are you taking to ensure the security and integrity of the altcoin.io exchange?

AG: Altcoin.io is based on a Plasma-like sidechain architecture, first outlined in Vitalik Buterin and Joseph Poon’s white paper, Plasma: Scalable Autonomous Smart Contracts. Plasma allows for side chains that run parallel to the blockchain, and which are controlled using smart contracts on the Ethereum network. Most importantly, they’re secure.

When traders exchange tokens, nodes verify and sign each transaction using a proof-of-authority consensus mechanism, managed by our partner, Tendermint. When traders withdraw funds, they have to wait a preset period of time to allow nodes to challenge any fraudulent behaviour. If someone is doing something unsavoury, nodes will trigger a mass-exit mechanism that returns tokens to the last legitimate state of the blockchain.

This, combined with usual blockchain defences such as cryptography, decentralization, and private keys, will ensure our exchange is the most secure on the market. And as we never take ownership of traders’ tokens, there’s no custodial risk – no hacker “honeypot” tempting attack.

AT: How are users tokens stored?

AG: All our users’ tokens are securely stored in smart contracts on the Ethereum network. We don’t ever take control of them, and traders are protected by the security measures I outlined earlier. The tokens stay secure in traders’ wallets until they want to trade, and then the smart contract and sidechain collaborate to connect traders and execute trades without any third party getting involved.

AT: Most exchanges are strategically located offshore in jurisdictions such as Malta, Singapore, Switzerland, etc. What made you decide to operate out of the United States?

AG: We see operating within the USA as a competitive advantage. I also have a fondness for the area of San Diego, and the many talented minds here that can help make our decentralized exchange a reality.

While the USA is ironing out a few regulatory kinks at the moment, we believe the blockchain space has incredible potential, and being at the heart of things when they kick off will give us the edge over other projects based elsewhere.

AT: You’ve discussed security tokens before on your blog and other platforms. Can you let us how you personally feel about the growth potential of this space?

AG: Security tokens are the simplest way of fractionalizing real-world assets, the value of which is in the trillions of dollars. The question is whether we should fractionalize and I think the answer is a resounding yes – it boosts liquidity, democratizes the market, and simplifies a lot of the complex bureaucracy involved in trading securities.

In my opinion, the opportunity presented by security tokens far exceeds that of even cryptocurrencies. They could represent everything in the world that has value, and that is currently traded on global security markets – literally a multi-trillion dollar opportunity.

AT: Are there plans in place for altcoin.io to enter the securities market in the future?

AG: We believe security tokens have a great future ahead, and we’d love to help traders exchange them in a fast, easy, and safe manner. Digitizing and fractionalizing value makes a lot of sense, providing transparency, efficiency, and helping a greater number of people share in the wealth of their economies. If we can help support such change, that can only be a good thing.

AT: What else would you like to mention about altcoin.io?

AG: We’ve spent a long time building the right technology for our decentralized exchange, and we’re just as passionate about creating an amazing user experience for our traders, including 24/7 customer support. So I’d like to make a promise to all potential traders reading this interview: If you think we could improve our exchange in any way, let us know and we’ll try to make it happen. We might not always be successful, but we’ll work hard to make Altcoin.io the best exchange ever, built for traders, by traders.

AT: Thank you for your time, I personally look forward to using the altcoin.io platform in the future.