Earlier this week, we highlighted a new $4.5B fund established by Andreessen Horowitz.  In it, commentary shed light on how bear markets often function as the perfect environment for forward development to occur, as companies focus on building out their services and tech.   This has been no more evident than in recent days, with scores of companies involved with digital securities announcing partnerships, funding, and overall growing adoption.  The following are a few examples of this, beginning with market leading Securitize.

A new $500M VC fund from Nemesis Technologies is soon set to launch with the help of digital securities specialists, Securitize.  This help will see Securitize not only operate as a registered transfer agent, but facilitate the tokenization of the fund.  With this, Nemesis states that it expects the fund to, “…become one of the largest tokenized venture capital fund in the world by the first quarter of 2023.”

The fund – which Nemesis notes will operate globally from Tokyo, to Abu Dhabi, London, and more – is expected to retain a heavy focus on the following industries and technologies.

Head of Securitize Japan, Eiji Kobayashi, commented on how tokenization is changing the way we invest, stating that the process is, “…unlocking new and broader access to investment opportunities ranging from VC funds to equity in private businesses and real estate.  Issuing and managing shares on the blockchain is more efficient and less expensive than paper, as well as enables opportunities to be accessed by more investors, particularly digital-native investors.  We expect many more businesses in Japan, the U.S. and around the world to adopt tokenization in the coming months and years.” 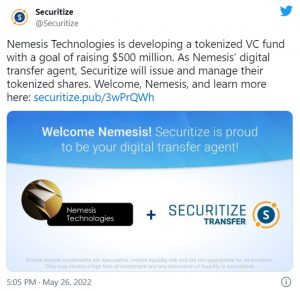 The ability for Securitize to function as a transfer agent in the tokenization of this new fund was recently touched upon in our on-going Interview Series, where we sat down for a discussion with SPiCE VC Co-Founder and Managing Partner, Tal Elyashiv.  With Securitize playing a role in the the SPiCE Fund I portfolio, Elyashiv elaborated on some of the company’s recent achievements.

“Securitize, building significant value by broadening its reach and expanding strategically to complete a wide set of complementary services in the tokenization space. This includes (but is not limited to) becoming a Transfer Agent, a Broker Dealer, and launching Securitize Markets digital securities marketplace, as well as becoming a significant player in the Japanese market through the acquisition of BUIDL.”

Meanwhile, Upstream – an exchange built to support digital securities and NFTs – has recently announced the addition of some star power to its brand.  NBA legend, hall-of-famer, and current Vice President of Basketball for the Atlanta Hawks, Dominique Wilkins, has joined Upstream as its latest Brand Ambassador. 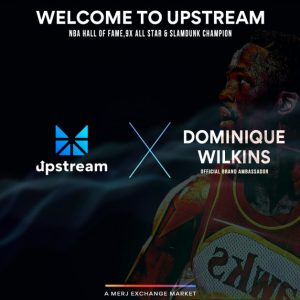 In this role, Wilkens is expected to, “…advise athletes and other public figures on how to leverage their personal brands to fund their ventures using fan engagement NFTs powered by Upstream’s eco-friendly exchange.”

As Securitize continues to lead the way within the digital securities sector in tokenizing high-profile VC Funds, various plucky newcomers have set their sights on becoming viable competitors.

One example of this is Brickken.  The company, which just successfully completed a $2M private token presale, indicates that it will provide, “…a tokenization protocol and interface for companies to explore the possibilities of creating on-chain equity from traditional assets.”

Notably, Brickken has also indicated that it will be launch its very own ‘BKN’ token in the coming months, which will facilitate the companies tokenization undertakings.  No further details were shared on how exactly BKN tokens will be structured.

Brickken CEO, Edwin Mata, expanded on what he envisions for the company moving forward. “We believe that the future of business and company ownership lies on the blockchain…Brickken is a destination for companies of all sizes to alter how they approach fundraising and business administration. As we approach our upcoming token listing our goal is to show there is an alternative to the traditional barriers in sustaining a company.”

With a, “…mission to bridge the world of traditional finance, blockchain, and decentralized finance”, Oasis Pro Markets has its work cut out for it.  Fortunately, the company now has the financial runway to make this mission a reality, as it has just announced the successful closure of its Series A funding round. 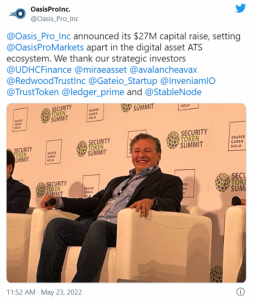 Coming in oversubscribed, and to the tune of over $27M, this Series A was highlighted by participation from investors such as,

The company notes that it intends on utilizing this newly raised capital to continue building out its team, technology, and presence on a global scale.

Looking back to last week, Security Token Group (STG) announced the closure of its own Series A funding round, which saw the company attract roughly $3M.  STG has indicated that it intends on using this capital to, “…expand on its other business verticals”.

STG states that its Series A was led by investors such as Blue Bay Ventures, Blizzard Fund (Avalanche), Exodus and Miami Tech.

Exodus CEO, JP Richardson, spoke on why his company chose to invest in STG, stating, “Security Token Group has continued to innovate since the inception of the security token industry.  We could not be more excited to work closely with their team to drive the adoption of the digital securities sector.  Security tokens have a massive opportunity to disrupt capital markets and create more efficient financial solutions.”

While all of the above examples of industry development point to a bright future for digital securities, there is inarguably still a mountain to climb on their path towards mainstream acceptance.  Digital securities experts, Polymath, recently conducted a survey of industry participants in an effort to gauge what they believe is the most important hurdle which needs to next be cleared. 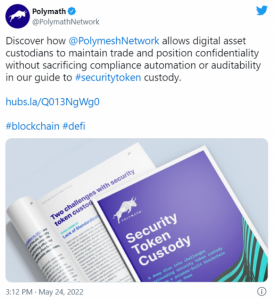 Among each of the opinions shared, there is one thing clear – digital securities have massive potential.  They can improve efficiency, transparency, and liquidity, all while reducing associated costs.  How to realize this potential is where things get murky, with many believing in different approaches to development of the sector.

The following are a few other brief excerpts summarizing various viewpoints from Polymath’s mini-book.

CEO of BCAS, Jonathan Galea, believes that, “We need to stop arguing over the fine print”

CEO of Digishares, Claus Skaaning, thinks, “Regulation needs to catch up and big players need to get on board”

Regardless of which path is taken, the day will eventually come when digital securities are commonplace, and companies like Polymath, Securitize, and each of the others listed here today will be looked back upon as trailblazers, setting the stage for how we will invest in a future that is increasingly digitized.