A Look at the ConstitutionDAO (PEOPLE) - Everything You Needed to Know - Securities.io 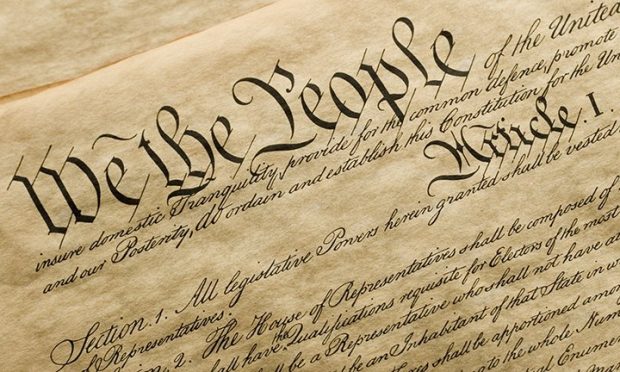 The ConstitutionDAO (PEOPLE) represented a major milestone for the decentralized movement. This interesting project sought to leverage the massive crowdfunding capabilities of blockchain technology to take control of one of America’s most prized artifacts, the first print of the US constitution. Specifically, the group created a DAO (Decentralized Autonomous Organization) to accomplish this monumental task. The idea to purchase the rare print of the constitution began as a joke on Twitter a few months prior. However, the idea soon gained steam, with blockchain developers eventually making the move to turn the concept into a reality. 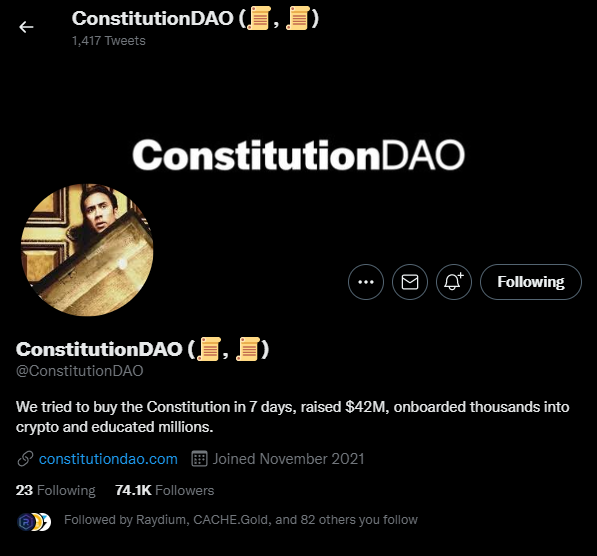 A DAO is a decentralized community management system. It enables groups of people to vote on proposals put forth by other members. You can think of a DAO kind of like a group chat with a bank account that votes on how to spend the funds. DAOs continue to become more popular in the DeFi market due to their added transparency and open nature.

Notably, the project is no longer in operation but it’s still worth learning about this advantageous plan to put crypto holders in possession of America’s most coveted parchment. Here is how ConstitutionDAO went from an inside joke to securing +$40M to make their concept a reality.

The ConstitutionDAO officially launched in November 2021. The founding group includes around 30 members. Jonah Erlich is one of the key members of the team. He explained in reports that the project’s goal was to put the constitution back into the hands of the people where it belongs. He described what exactly it would mean to control the constitution and what benefits it would bring, including controlling the context in which the item was showcased.

You may think the idea seems farfetched, but it was very close to becoming a reality. The community secured $47 million ETH to purchase the document at Sotheby’s high-end auction. Everything looked good for the team but at the last minute, they were outbid by the billionaire, Ken Griffin at $43.2M.

While the group secured 47M in funding, they realized they couldn’t go any higher and guarantee the safekeeping of the document properly. Remember, the constitution is going to require 24-hour security, special humidity-controlled transportation, and a number of other expensive systems to remain intact.

After the Loss – What Happened to Everyone’s Crypto?

ConstitutionDAO lost the auction and announced it would refund all participants minus ETH gas fees. This was good news for many traders but the gas fees did eat up many users’ refunds. In some instances, the gas fees were over $200 in value. This led the group to pause the refund which spooked traders. However, the pause was a good thing as there are now two options traders can select. 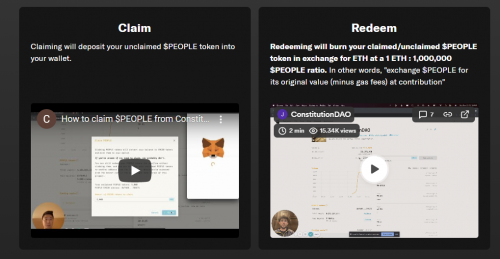 They can claim their PEOPLE tickets and trade them on exchanges. PEOPLE, the project’s token is still popular despite the project no longer being operational. Maybe traders see the sentimental value in owning a piece of such a historical attempt to introduce blockchain into the American dream? The second option is to redeem your tokens at a rate of 1 ETH = 1,000,000 PEOPLE, which is the same rate they offered the token to users during the launch.

What Problems Did ConstitutionDAO (PEOPLE) Attempt to Fix?

ConstitutionDAO wanted to make some major changes to the market. The project showed that community funding can revolutionize how the markets function. The group secured $46M to return the constitution to the people. Even though the project didn’t succeed in its goal, it demonstrated the concept’s power.

There are a couple of key benefits that the ConstitutionDAO developers boasted about during the brief life of the project. The platform would have given DAO users control over the future of the constitution. This would include a host of critical options such as security.

The group would gain governance rights over the documents of the US Constitution. This ownership would enable the group to vote on if to lend it to locations and museums as they felt. Additionally, the group would have been able to decide what message to accompany the document and how it should be labeled when shown.

Another cool benefit that the ConstitutionDAO provided was it introduces a lot of people to cryptocurrencies for the first time. The event saw participation from thousands of international traders. Many users were venturing into the blockchains sector for the first time. ConstitutionDAO provided a streamlined trading experience that enabled these users to easily join the project securely.

How Does ConstitutionDAO (PEOPLE) Work

The ConstitutionDAO leveraged a speed-run DAO infrastructure. Users would have been able to vote by staking their tokens. The more tokens you held and the more weight your vote held. The development team spoke in interviews on a variety of other governance options they were reviewing that would have helped to reduce any whale manipulation in the future.

The ConstitutionDAO leveraged the JuiceBox fundraising network as part of its strategy. JuiceBox is a recognized decentralized crowdfunding protocol. The network provides secure and out-the-box crowdfunding solutions to startups and enterprise clientele.

PEOPLE was the official governance token for the project. The token would have enabled holders to enter the voting mechanisms and influence the future of the US constitution had the group succeeded. PEOPLE is an ERC-20 token that is still traded on DEXs. The token leverages Ethereum’s security to provide peer-to-peer transactions globally.

ConstitutionDAO must have had some people sweating as they registered with a budget of $47M to purchase the constitution’s first copy. It’s hard to say what would have happened had the group won. Would the document be delivered directly? What security precautions would have had to be in place? More importantly, what would the group do with America’s treasured roadmap?

The market will never know. However, the concept is sure to resurface in the future, as other historically relevant items come up for auction. For now, ConstitutionDAO can be thought of as an experimental project that demonstrated the power of blockchain crowdfunding.