NEM (XEM) Price Drops to $0.1: Will the Support Hold this Time? - Securities.io 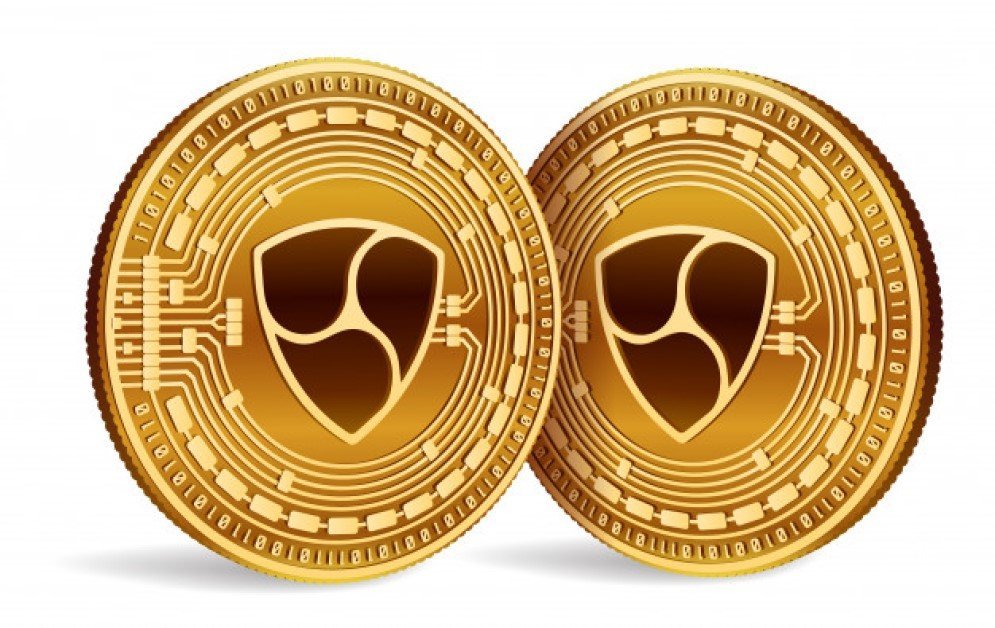 New Economy Movement, or NEM (XEM) is an ecosystem of multiple platforms that use blockchain technology and cryptography to offer solutions for individuals and businesses alike. The project has attracted quite a lot of attention over the years, which allowed it to remain on the top 100 list of largest cryptos by market cap. At the time of writing, NEM sits at 85th place with a market cap of $909 million.

However, while its market cap may be quite close to $1b, the coin’s price has dropped to the lowest point it has seen since August 2020 about a month ago, and it now seems to be spiraling towards it yet again.

Back in August 2020, the crypto rally started leading Bitcoin on the path towards an entire series of new milestones, and while most of the altcoin market did not join BTC on that path until 2021, NEM did start to grow. That growth continued in 2021 as well, at least when it comes to the first half of the year.

Starting the year with a price of $0.22, XEM quickly started growing until it hit $0.69 on February 22nd. Unfortunately, the resistance at $0.7 stopped its progression, and it even rejected the coin’s price back to $0.5 by February 25th.

The coin has seen a very sharp rise and an equally sharp correction, but after reaching $0.5, it rose once again, this time faster than ever before. Not only that, but the momentum allowed it to breach the resistance at $0.7, and to skyrocket to $0.8, reaching its highest point since early 2018, when it reached its all-time high at $1.84. 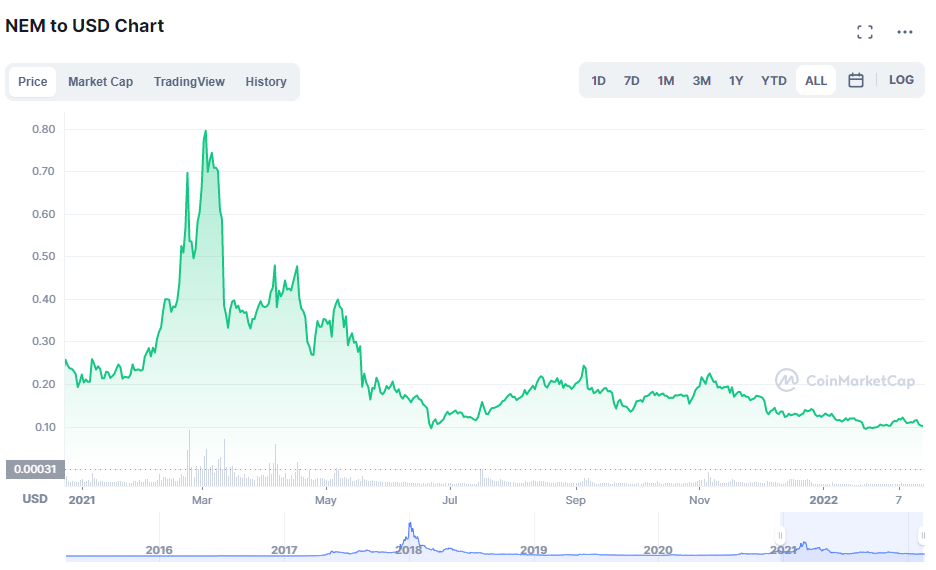 While the price surge in early 2021 seems quite insignificant compared to the coin’s all-time high, it was a massive improvement for NEM, which crashed to its bottom by mid-2018 and remained there ever since.

Unfortunately, NEM did not go further up than $0.8, and it did not stay up there long, either. On the very next day after hitting this level, its price corrected to $0.7. After a brief attempt to go back up, the project’s price was pushed back down yet again, eventually sinking to $0.33 on March 14th. For a time, the coin managed to stabilize here and use this level to bounce back up.

In doing so, it hit $0.4, which sent it back down to the support at $0.33, only for it to bounce back up once again, and this time surge to $0.47. The coin tried to breach this level twice in April 2021, but after failing both times, it sank down even deeper, to $0.26 on April 25th. It then made one last attempt to rally, hitting $0.4 in the process, before the bearish trend took over, forcing it to crash down with the rest of the market.

XEM’s price crashed to its lowest point, at $0.1, which was the first and last time it touched this support in 2021. After reaching this support, XEM price started a recovery that took it to a resistance level at $0.20, and after trying to breach it for months, the coin was finally pushed back in November, as the crypto sector saw its second major price crash in 2021.

Following the price drop of late 2021, XEM price entered the new year with a value of $0.12. Like the other coins, NEM spent the first five days of January 2022 performing quite well and giving hope to its holders, However, that hope was taken away as the coin dropped to $0.09, officially breaking the support at $0.1, and sinking to the lowest point it has seen since August 2020. 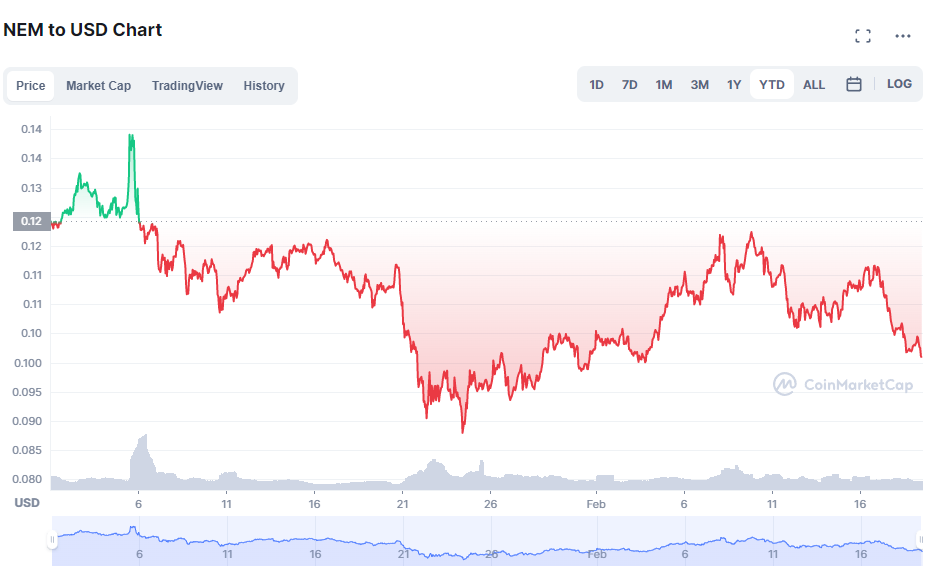 Since then, XEM price recovered to $0.12 as late January and early February brought a moment of relief and a hint of bullishness. However, following February 9th, NEM has once again started dropping, which brought it to $0.10, which is where it sits right now. Meanwhile, its token holders are left with a single question — will the support hold this time, or is XEM about to start spiraling down once again?

To learn more about this token visit our Investing in NEM guide.