Investing In Render Token (RNDR) - Everything You Need to Know - Securities.io

Connect with us
Render Token 101:

The Render Token (RNDR) project introduces a host of new opportunities to digital creators. The network was built to provide content creators access to distributed GPU rendering services on the blockchain. The platform allows users to share their GPU power in a seamless manner. In return for their efforts, users receive rewards. In this way, Render Token provides much-needed computational power to artists, developers, and studios.

Render Token allows anyone to share their unused GPU power with ease. The system eliminates the technical barriers associated with network computational systems. The system connects users looking to perform render jobs with people who have idle GPUs. This strategy saves the users significant time and money since they don’t need to purchase high-end computers to handle these tasks in-house. 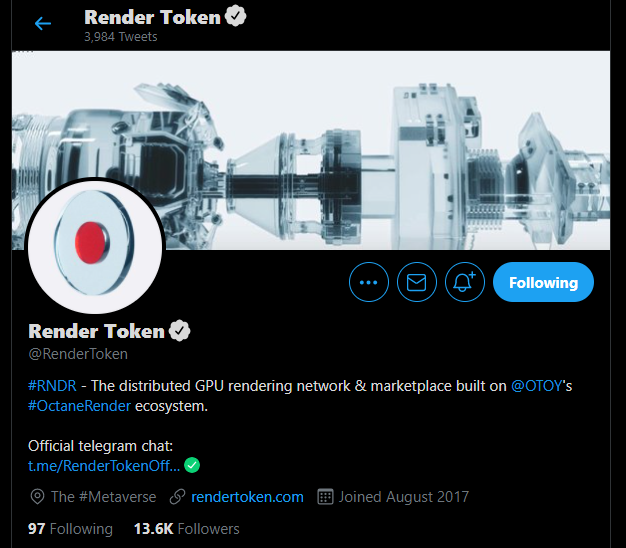 Many people are unaware of the growing demands of the digital community in terms of processing. The digital creation market has continually expanded over the last decade. This growth has created more demand for high-end rendering services. In most instances, users’ GPUs remain idle when they are not rendering their own work. This scenario creates a situation in which new users have to purchase new GPUs. In the end, material and electrical consumption go up.

Another major concern for these industries is a lack of resources. Anyone who works with high-end rendering demands can tell you the process is time-consuming and requires a lot of energy. Render Token leverages its distribution network to create a decentralized GPU rendering pool. This rendering power is immediately available to all network participants.

There are a lot of benefits gained when you join the Render Token network. The protocol enables anyone with a modern GPU to contribute their rendering power in exchange for tokens. Regular users earn profits in a secure and simplified manner and clientele can save on hardware investment costs. In this way, Render Token (RNDR) bridges the gap between GPU supply and demand.

One of the core requirements of Render was to develop a scalable network. The GPU rendering business model requires the network to be able to scale up to meet growing demands in a linear fashion. The protocol leverages blockchain tech to provide an efficient, powerful, and capable alternative in the market. Render Token users can process intricate files that would be difficult to complete locally.

Render Token users have more options. They can create more robust environments. The expandability of the network permits developers to design more interactive and immersive landscapes.

Another core desire of the development team behind Render Token is its digital management systems. Currently, there is no globally accepted, universally accessible, storage location for content creators. The current options in the market are all centralized. Sadly, this leaves creators at the mercy of centralized platforms that can censor or delete their data without warning.

Render Token leverages the un-alterability of blockchain technology to ensure that creator’s rights are protected. Additionally, the system can register when these works are accessed. In this way, artists and content developers can better control the use of their works. Impressively, the network can be set up to automate royalty payments as well. These systems will provide more ROI potential for developers.

How Does Render Token (RNDR) Work?

In the Render Token ecosystem, users submit their jobs to the community. The platform automatically calculates the amount of RNDR required to perform the job. This data is then sent as an attachment that details the specifics to a smart contract. The information is then broadcast across the Render Network. Notably, GPU owners use OctaneRender to process the requested job.

OctaneRender serves a critical role in the Render Token network. Specifically, OctaneRender uses RDNR to distribute the framework of the existing rendering service. The entire process eliminates the middleman to create a more responsive UX.

RNDR tokens are the main utility token of the platform. Users send RNDR to the individuals performing the render work. Users can also send value globally utilizing this token. A small percentage fee is charged on every RNDR transaction which goes towards the future development and running of the Render Network. 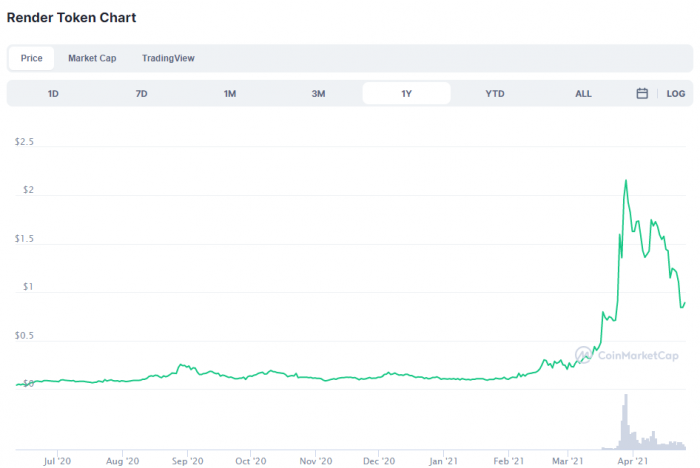 RNDR is available on a variety of top centralized exchanges. Specifically, Huobi Global, HitBTC, KuCoin, Hoo, and Gate conduct the highest trading volume globally. Currently, there are no fiat/RNDR trading pairs at this time. As such, you will first need to convert your fiat over to Bitcoin or Ether. Once you have crypto, you can then trade directly for RNDR.

Render Token is a subsidiary of OTOY. OTOY entered the market in 2008. The platform officially launched Render Token in 2017. Since that time, the platform has seen considerable expansion. OTOY now has over 60 employees and four offices. The company’s headquarters is in Los Angeles, California.

How to Buy Render Token (RNDR)

Render Token (RNDR) is available on the following exchanges:

Binance – Best for Australia, Canada, Singapore, UK and most of the world. USA residents are prohibited from buying Render Token (RNDR). Use Discount Code: EE59L0QP for 10% cashback off all trading fees.

How to Store Render Token (RNDR)

If you seek to make a major investment in RNDR if you are planning on HODLing this crypto for long periods of time, a hardware wallet is the best option. Hardware wallets keep your crypto stored offline in “cold storage.” This strategy makes it impossible for online threats to access your holdings. The Ledger Nano S or the more advanced Ledger Nano X both support Render Token (RNDR).

Render Token – A New Approach for a Growing Market

Render Token appears to be well-positioned in the market. There has been a growing demand for GPU rendering services over the last five years. Notably, Render Token can save the industry tons in hardware costs. At the same time, it provides regular users with the opportunity to earn passive rewards. For these reasons, you can expect to see this project expand in the coming months.