Investing In Polkadot (DOT) - Everything You Need to Know - Securities.io

After a bumpy start that included the hacking of 60% of the firm’s ICO funding, Polkadot is finally ready for public usage. This next-generation blockchain brings a host of new functionality and interoperability to the market. Consequently, Polkadot is one of the most anticipated projects in the sector at this time. Here are some of the reasons why this platform continues to garner new support.

What Problems Does Polkadot (DOT) Solve?

Polkadot attempts to tackle one of the most pressing issues facing the blockchain sector, interoperability. Currently, the market is in a state of extreme compartmentalization. Blockchains function as separate islands of data with little way of leveraging the information the other networks posses. Polkadot eliminates these concerns through the integration of a variety of proprietary technologies. Notably, Polkadot is even able to communicate information from private blockchains to public networks and vice versa.

There are endless reasons you would want to connect individual blockchains. For one, the ability to send any type of data across any type of blockchain revolutionizes the sector. You could transfer this data across public, open, permissionless blockchains and leverage the best characteristics of each network.

In this way, Polkadot introduces a new era in scalability, interoperability, and security. The firm’s flexible and adaptive architecture facilitates building technology, including smart contract platforms. In this way, developers can start to build next-gen applications that get permissioned data from a private blockchain and use it on a public blockchain. These capabilities have some analysts to suggest that Polkadot poses a credible threat to Ethereum’s dominance.

How Does Polkadot (DOT) Work

The Polkadot system functions in a unique manner that unites a network of heterogeneous blockchains called parachains and parathreads. These chains connect to and are secured by the Polkadot Relay Chain. There are also instances where these chains connect to external networks via bridges as well. This design provides Polkadot with added flexibility. Here are the main components of the network.

At the core of Polkadot’s functionality is the relay chain. This protocol is responsible for the network’s shared security, consensus, and cross-chain interoperability. Notably, consensus on the relay chain is achieved through two single-responsibility consensus mechanisms. The first one is for block production and the second one helps to accomplish finality.

Parachains are sovereign blockchains. These are networks that have their own tokens. In most instances, these networks are optimized for specific use cases. Keenly, Parachains are free to design their own governance mechanisms, allowing for maximum freedom without affecting other parachains.

Parathreads function similarly to parachains but with a few minor tweaks. These networks run on a pay-as-you-go model. This model is more cost-efficient for blockchains that don’t need continuous network connectivity to function correctly.

Another important feature are bridges. This protocol allows parachains and parathreads to connect and communicate with external networks like Bitcoin. Bridges expand the interoperability of the network.

The DOT token is the native token of the Polkadot network. As such, it serves a couple of vital roles in the system. It’s used to participate in governance decisions, including tabling proposals, voting, and bonding. It can also serve as an electronic payment system.

Polkadot features a multilayered governance model. This model allows for updates to the protocol to occur without the need to conduct hard forks. The system integrates transparent on-chain voting to keep the community cohesive. The Polkadot community consists of two groups:

Council members are elected to represent passive stakeholders. These nodes serve two primary roles. They can propose new referenda in the network and they can vote down proposals they deem as dangerous or cost-prohibitive.

The network also consists of the technical committee. This group is composed of teams actively building Polkadot. Their responsibilities include proposing emergency referenda. This system helps to fast-track voting and implementation of the most crucial upgrades to the network.

Polkadot takes a different approach to consensus mechanisms. The platform introduces the market to a new consensus mechanism known as GRANDPA (GHOST-based Recursive Ancestor Deriving Prefix Agreement). This mechanism provides Polkadot with a more secure and resilient network. Specifically, it allows networks to pool security. The added protections are then aggregated and applied to all.

GRANDPA is incredibly scalable when compared to earlier generation cryptocurrencies such as Ethereum. For example, Ethereum can handle around 12-tps. GRANDPA offers a major upgrade. The system provides near-instant confirmation times. On average, under normal network conditions, transactions take under a second to complete. To accomplish this task, GRANDPA introduces a few new roles to the consensus system.

Nominators are tasked with securing the Relay Chain. This task requires nominators to select trustworthy validators and staking dots in the ecosystem.

Validators have the responsibility of securing the relay chain. Validators go about this task by staking dots, validating proofs from collators, and participating in consensus with other validators on the network.

The goal of Collators is to maintain shards by collecting shard transactions from users. Once this information is collected, the Collators will produce proofs for the validators.

The network also utilizes some unique monitoring protocols known as Fishermen. These nodes monitor the network and report bad behavior to validators. Notably, Collators and any parachain full node can perform the fisherman role within the Polkadot ecosystem.

Polkadot was built from the ground up to simplify the most common programming tasks associated with Dapp development. The platform was built with Substrate. Substrate is very popular in the market because it simplifies the process of creating, deploying, upgrading, and experimenting with different types of application-specific blockchains. This integration allows DApp builders to place more attention towards innovations rather than the mechanics of building and operating a blockchain. 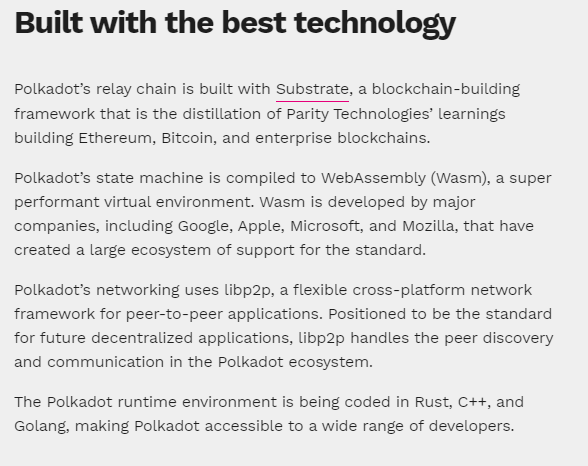 Polkadot also integrates a flexible cross-platform network framework for peer-to-peer applications known as libp2p. When you combine this with a runtime environment that allows developers to code in a variety of languages including Rust, C++, and Golang, it’s easy to see how Polkadot improves on Ethereum’s initial design.

The history of Polkadot actually starts with the history of Ethereum. You see, Polkadot was founded by Ethereum co-developer, Gavin Wood. Wood was the co-founder, initial CTO, and core developer of Ethereum. He is also well known as the individual that invented the Solidity smart contract programming language that resides at the core of Ethereum’s functionality.

Wood decided to leave Ethereum to build a more robust programmable blockchain in early 2016. Specifically, he pondered how to develop a sharded version of Ethereum. By October 2016, he had the technical aspects worked out and had published the blockchain’s whitepaper.

Exactly a year later, Polkadot launched its Initial Coin Offering. The event, which took place from October 15–27, 2017, was one of the largest ICOs of the time. Specifically, the company secured around $145 million. However, the success of the event was short-lived.

Less than two weeks later, Parity Technologies, originally EthCore, one of the main development teams behind Polkadot was hacked. This hack resulted in a combined loss of around 150 million USD. Sadly, Polkadot’s ICO funding accounted for around 60% of the funds frozen during the hack. This loss of funding slowed development during the early days of the project.

In 2018, Polkadot came back strong with the launch of the BBQ Birch testnet. Importantly, this launch demonstrated the capability to build and deploy a Web Assembly smart contracts chain with Substrate. In December of the same year, the Web3 Foundation announced the launch of its grants program funding efforts to improve the Web3 ecosystem. Notably, both ChainSafe and Soramitsu received grants to implement the Polkadot Runtime Environment in Go and C++.

Last year, Polkadot continued on its path. The firm accomplished a major milestone after the completion of its PoC-3 and launch of its Alexander testnet. The new developments brought with an improved governance mechanism and a host of other new features. In 2020, Polkadot has pushed its development even further. The platform recently enabled balance transfers.

How to Buy Polkadot (DOT)

Polkadot (DOT) is available on the following exchanges:

Uphold – This is one of the top exchanges for United States & UK residents that offers a wide range of cryptocurrencies. They also offer Polkadot staking. Germany & Netherlands are prohibited.

How to Store Polkadot (DOT)

There are a few ways to store your Polkadot (DOT) safely. The platform offers an official Polkadot JS Wallet to users for free. The wallet breaks down into two sections. The Controller section can issue orders on the network, whereas the Stash feature is used when storing large amounts of DOT.

There are also some really cool mobile wallets for this cryptocurrency as well. One of the most popular options is the Polkawallet app. This Android Dapp allows users to easily and quickly store DOT. Mobile apps are far more convenient but they are more susceptible to hacks because they remain online.

If you seek to make a major investment in DOT or if you are planning on HODLing this crypto for long periods of time, a hardware wallet is the best option. Hardware wallets keep your crypto stored offline in “cold storage.” This strategy makes it impossible for online threats to access your holdings. The Ledger Nano S or the more advanced Ledger Nano X both support Polkadot (DOT).