Investing In Curve DAO (CRV) - Everything You Need to Know - Securities.io

Connect with us
Curve DAO 101:

What is Curve (CRV)?

Curve (CRV) is a decentralized exchange (DEX) and a liquidity provider designed specifically to provide DeFi services to stablecoin users. The network borrows many concepts from Uniswap such as integration of an AMM and liquidity pools. As such, it’s often referred to as the “Uniswap of stablecoins” by its developers.

Curve has grown in popularity since the concept was first introduced in 2019. Today, the project is a favorite among stablecoin traders and liquidity providers looking for minimal slippage and deep liquidity. Currently, Curve has $10,151,190,151.29 in locked liquidity, including factory pools. The platform sees an average daily trading volume of +$166,000,000.

The developers behind Curve (CRV) tackle a major problem in the Stablecoin community, a lack of dedicated services. There are many different types of stablecoins in circulation today. Curve focuses on stablecoins pegged to national currencies. It provides a valuable market and structure designed to leverage the unique characteristics of these coins. In this way, Curve helps provide a link between centralized stablecoins like USDT and decentralized projects, such as DAI. 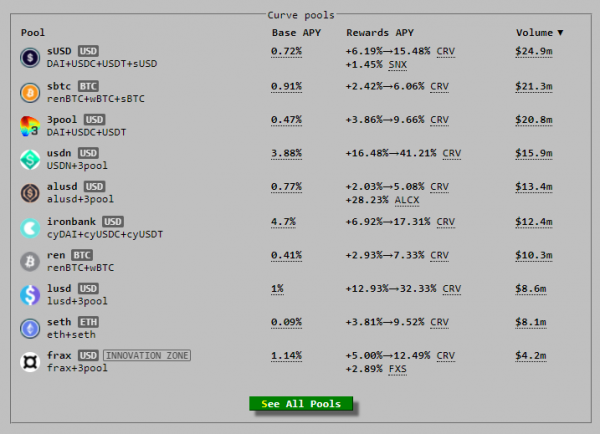 Curve helped DeFi investors to overcome some of the issues that Uniswap V1 had. The developers integrated some proprietary systems that enabled efficient stablecoin trading, low-risk transactions, and passive rewards for liquidity providers.

The first thing you notice when you venture to Curve is that the protocol is very simple in both design and technical structure. It’s evident the developers wanted their platform to perform across any type of internet-enabled device. You can easily navigate the platform and find the vital data on pools required to make investment decisions.

Slippage is the difference between your trade price and what you actually pay for your assets. It’s the result of movement in price between the time your order enters the market and the execution of a trade. Slippage is a major problem for early DEXs. Curve alleviates these problems by focuses on assets pegged directly to national currencies.

The technical structure of Curve enables the platform to provide excellent exchange rates for stablecoins. The low fees are due to its simplistic smart contract design. The system completes the trade in one transaction which reduces Gas prices for traders. On average, traders pay 30% lower fees when they exchange their stablecoins on Curve versus Uniswap.

How Does Curve DAO (CRV) Work

Curve was built from the ground up to provide low slippage and low fee swaps between assets pegged to national currencies. The platform operates on the Ethereum blockchain. As such, it enjoys full interoperability within Ethereum’s vast ecosystem.

Users can make trades directly from their ERC-20 compatible wallets such as MetaMask. They can also trade CRV on other popular DEXs. In the coming months, the platform intends to expand to other networks. This maneuver would increase liquidity for traders.

Users can stake their stablecoins on Curve and earn passive rewards. Curve users locking their coins in liquidity contracts. You can add DAI or USDT to Curve Pool to accomplish this task. Notably, Curve offers multi-year staking contracts. The longer you stake, and the more coins you lock up, the higher your rewards. 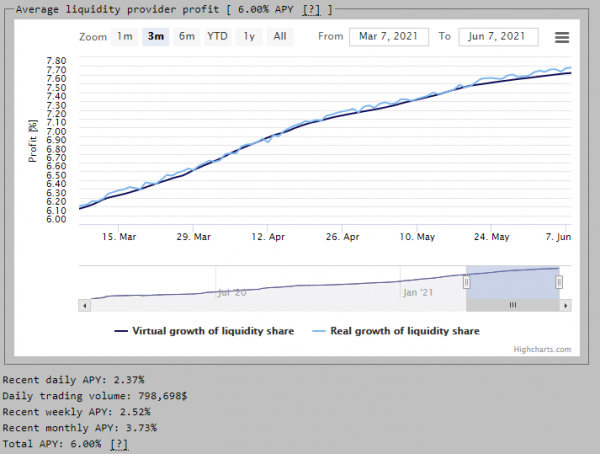 Curve leverages a proprietary fiduciary savings account protocol to provide users with interest-bearing features. These accounts operate similar to your local bank account except you store your stablecoins instead of fiat. The payouts are much higher than your traditional savings account. Also, you get more transparency because you can monitor all transactions on the blockchain.

Support for the DeFi Sector

Curve has shown a pioneering spirit in the DeFi sector. The platform has even utilized its protocol to benefit others. The network provides a way to connect with other DeFi platforms using Curve pools. You can find pools with Yearn Finance, Uniswap, and Compound. This approach has helped drive more adoption in the DeFi market.

CRV is the ERC-20 governance token of the Curve ecosystem. Its primary purpose is to incentivize liquidity providers. The original supply of CRV was set at 1.3 billion. The system will issue a total of 3.03 billion after token distribution to liquidity providers.

Curve shares in Ethereum’s technical characteristics. It relies on a Proof-of-Work (POW) consensus mechanism. Miners approve transactions on the Ethereum blockchain. The miner that adds the next block of transactions to the blockchain receives a reward for their efforts in the form of newly minted Ethereum.

Notably, Ethereum is in the middle of converting the network to a Proof-of-Stake (PoS) Network. The conversion would reduce Gas prices, provide staking capabilities, and improve scalability. These features would directly improve Curve’s responsiveness and capabilities.

Curve (CRV) is the brainchild of Dapp developer, Michael Egorov. He first introduced the concept via its whitepaper in November 2019. Interestingly, the original title for the project was StableSwap. The platform’s high yields and low slippage helped Curve to capture its niche market immediately.

How to Buy Curve DAO (CRV)

Curve DAO (CRV) is available on the following exchanges:

Curve (CRV) – More Valuable than Ever

As the stablecoin market expands, so does Curve’s role in the market. The network is uniquely positioned to offer stablecoin users a variety of features that are hard to find anywhere else. For these reasons, you can expect Curve to continue to expand its operations moving forward.