Investing In the XYO Network (XYO) - Everything You Need to Know - Securities.io

Connect with us
XYO Network 101:

The XYO Network (XYO) introduces a decentralized ecosystem of geospatial sensors called oracles. Oracles are sensors that can communicate data to and from a blockchain. They are one of the most promising technologies in the market. The purpose of the XYO network is to provide absolute and verifiable location data certainty using these sensors.

Additionally, developers can integrate this system to improve their own projects. The network provides businesses and applications with a more efficient way to monitor their supply chains or other vital location-related data. As such, it continues to see growing adoption.

What Problems Does the XYO Network (XYO) Solve?

Location data certainty is a major issue for businesses nowadays. It can be extremely expensive to create a large logistics system. Aside from the setup costs, the more in-depth the monitoring and the more difficult it becomes to sort the data. Additionally, the current logistics sector is plagued with data transmission delays. 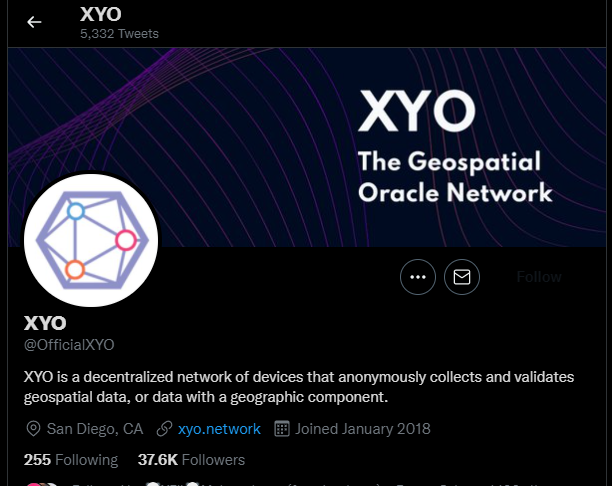 The XYO Network leverages a unique technical structure to reduce these issues and increase the transparency and validation of geolocation data. The network uses a multi-layered node approach to ensure that geo local data is captured, validated, encrypted, and stored securely. The system accomplishes these tasks autonomously which helps to free up time and funding.

Another major issue that has plagued businesses in the digital markets is spoofing. Spoofing is a hacking method. It requires a hacker to disguise a communication from an unknown source as being from a known, trusted source. In a business environment, this method can be used to gain access to secure data.

Spoofing has been a major issue for the multi-billion dollar gaming market. It has created multiple issues for developers and gamers such as reduced trust in the value of in-game digital assets. It also upsets players and can discourage new users from entering the market.

XYO eliminates spoofing via its data verification system. A hacker attempting to attack an XYO supported system would also need to infiltrate the person they are spoofings home or office to pull off their scheme. At that point, you’re dealing with spy agency-level hackers. In reality, 99% of spoofers would be thwarted by the need to provide a location proof on the XYO network.

Benefits of the XYO Network (XYO)

The XYO network enables companies to automate their business systems and add an extra layer of security to their practices. The network operates as an open-source project that invites the community to join in and improve the user experience. Open-source projects provide more transparency to users and investors.

XYO is unique in that it enables firms to anonymously connect geospatial data. This provides developers with a host of new opportunities and use cases in the market. Privacy concerns continue to be a major hot-button topic. As more large-scale data breaches occur, the push to remove third parties from possessing sensitive information has increased.

Another cool aspect of XYO is its educational support. The protocol provides developers, enthusiasts, and crypto advocates with a plethora of information. You can learn how to integrate XYO into your next Dapp. You can also ask other developers questions and gain valuable insight into how to best leverage the protocol’s capabilities.

How Does the XYO Network (XYO) Work

The XYO App introduces a new concept called Proof-of-Origin to the equation. This system provides a higher level of validity to the market via a multi-node structure. Specifically, the system confirms a location through the collection, confirmation, and storage of bound witness interactions

Sentinels are the off-chain oracles that power the XYO system. Their purpose is to broadcast its location and other data depending on the network. Notably, Sentinels also alert the network when in the proximity of other sentinels. This alert is what’s known as a bound witness

Bound Witness interactions are a critical component of the XYO ecosystem. This system allows independent devices to verify interactions with other devices using zero-knowledge proofs. The bound witness provides both the time and location of the interactions.

XYO bridges scan the blockchain in search of bound witness interactions. These nodes will then verify the data and place a unique signature on each interaction. This signature validates the bound witness which enables it to move on to the next step of the equation.

Archivists take this data and encrypt it and store it. They encrypt the validated bound witness interactions after they are confirmed by the bridge.

At the end of the system is the Diviner, this protocol interacts with individuals and applications by providing answers to geo-related questions. Users can send questions to Diviners which will alert the node to seek a response from the Archivist or a Bridge directly. For example, you may need your software to ask, “Was this product at this location at this time?”

Users can stake XYO and earn passive rewards. Staking helps to secure the network and provides users with a way to profit without risking losing their digital assets. When you stake your XYO tokens, you lock them in a network smart contract for an agreed time. You can increase your rewards by staking more tokens. 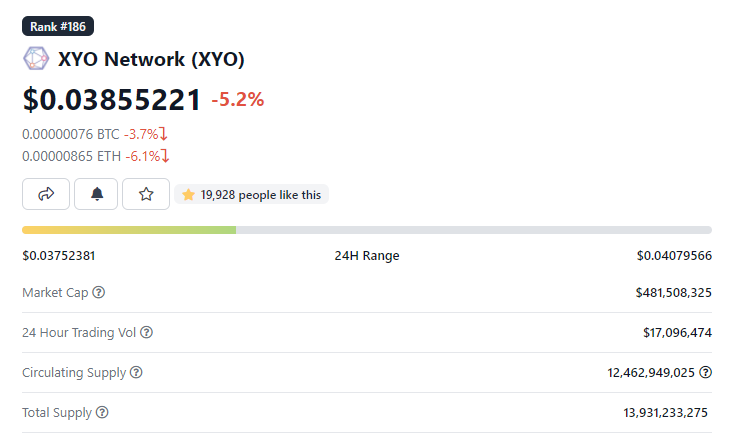 The XYO token is the main utility token of the network. This ERC-20 token operates as a cryptocurrency as well. Users can send value globally in minutes using the network. XYO can be used to pay for network fees. It’s also how users receive rewards.

The XYO Foundation is responsible for helping to drive adoption. The network uses a multi-faceted approach to introduce the network to a broader audience. They provide education, research, and continued development of the XYO protocol across all areas of concern.

How to Buy XYO Network (XYO)

XYO Network (XYO) is available on the following exchanges:

The XYO network provides a valuable service to the market. In the past, oracles have created issues when they provide incorrect information that is then placed on a blockchain ledger. XYO provides a way to validate an oracle’s data and location as a means to prevent spoofing and other data corruption issues. As such, it has the potential to improve a wide selection of business systems.