Investing In Reserve Rights (RSR) - Everything You Need to Know - Securities.io

Connect with us
Reserve Rights 101:

What is Reserve Rights (RSR)?

Reserve Rights (RSR) token serves multiple purposes within the Reserve Protocol. The token’s primary purpose is to provide a mechanism to maintain the dollar-pegged value of the network’s stablecoin, RSV. Uniquely, the Reserve Protocol is designed to scale supply based on demand. In this way, the protocol maintains 100% or more on-chain collateral backing.

The Reserve Protocol was built to be secure and provide a viable alternative to the centralized fiat currencies in use today. The network utilizes a basket of smart contract-managed cryptocurrencies to maintain its value. The project launched using USD Coin (USDC), TrueUSD (TUSD), and Paxos Standard (PAX). Eventually, the developers hope to leverage a vault of +100 different low-volatility assets to secure RSV’s value.

The concept of a multi-asset on-chain stablecoin has always been of interest to investors. As such, Reserve Protocol has seen considerable adoption since its launch. According to company reports, the coin has increased in value by more than 320% since January.

The main problem that RSR attempts to reduce is volatility. The volatility of cryptocurrencies has restricted the market’s expansion as a medium of exchange. Merchants have been reluctant to accept cryptocurrencies due to concerns that they could lose their profits during market downturns. The Reserve Protocol provides a stable store of value, medium of exchange, and standard of deferred payment to the market. 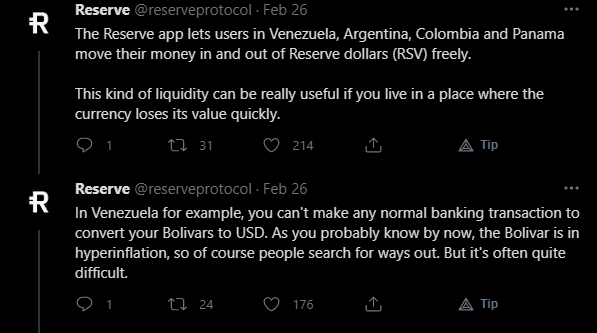 Joining the decentralized economy can be confusing for new users unfamiliar with the onboarding process. Currently, these users need to find a third-party exchange to gain access to the market. Uniquely, the Reserve Protocol introduces fiat on/off ramps into its core protocols. This strategy eliminates the need to utilize third-party Dapps to enter the market.

Another problem that the Reserve Protocol’s developers wanted to tackle was servicing the unbanked. There are billions of people around the world who don’t have access to basic financial services. In many instances, a lack of infrastructure has made it impossible for traditional banking institutions to reach these groups. Reserve Protocol seeks to provide a reliable and robust merchant ecosystem to these areas with a focus on developing countries.

To accomplish its goals, the Reserve Protocol created an accessible and trusted ecosystem that enables users to easily store or transfer value globally. The network provides low-friction cross-border transactions that make it ideal for enterprise and remittance uses cases.

How Does Reserve Rights (RSR) Work

The Reserve Protocol introduces an innovative way to maintain its stablecoins value. Specifically, when the Reserve is above its target price plus a stability spread, the system automatically auctions tokens. This lowers the token supply which lowers the price. Reversely, the system buys RSV if the value drops below the target price plus a spread to raise the demand.

The Reserve Protocol lives on the Ethereum blockchain. Ethereum is the #1 blockchain in terms of DeFi platforms and token launches. As such, RSR holders can save their tokens in any ERC-20 compliant wallet. Additionally, these tokens can be traded on popular DEXs such as Uniswap.

RSV is fully backed via multiple assets locked into smart contracts. Originally, the token was backed by fiat currency. Per the company’s roadmap, the token then became backed by multiple assets. Eventually, RSV will develop a market demand high enough for it to maintain a static value on its own. 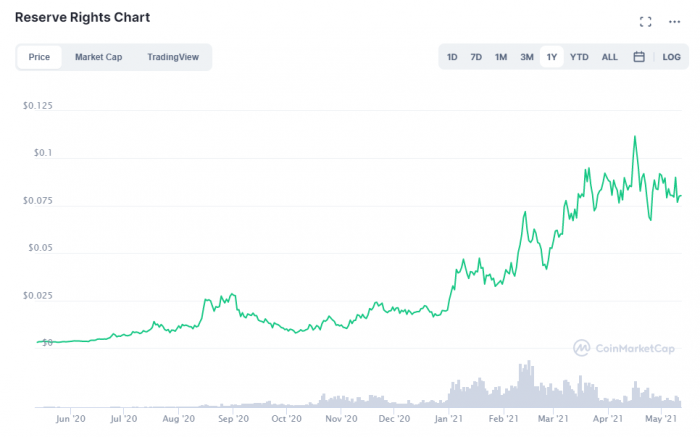 RSR is the utility token of the Reserve Protocol. This token is crucial in maintaining the value of RSV at this time. Specifically, it’s used to guarantee the collateralization rate and peg of the RSV. It also functions as the main governance token for the network. Users need to hold these tokens to gain voting rights. There is a circulating supply of 13,159,999,000 RSR coins and a maximum supply of 100,000,000,000 RSR coins

The Reserve Vault plays a crucial role in the system. It’s where the capital gains of the assets that collateralize the RSV token are stored. Notably, there is a 1% fee on all RSV transactions that goes directly into this system as well. The community votes on what projects and upgrades gain access to these funds.

The Auction system works closely with the Reserve Vault to help maintain RSV’s peg. Its role is to execute Reserve Manager and Vault Manager trades with parameters for minimum price and maximum quantity. These trades happen frequently to ensure the value of RSV remains constant.

Reserve Protocol users enjoy access to a mobile Dapp. The Dap features an intuitive interface that makes it easy to send and receive tokens globally. The Dapp was first listed in several South American countries. The developers chose to directly focus on counties suffering from high inflation such as Venezuela.

Reserve Rights launched in May 2019. The platform’s co-founder and CEO, Nevin Freeman has a history of launching successful tech firms. He was the co-founder of Paradigm Academy, Metamed, and RIABiz.  The Reserve Protocol secured funding during its initial exchange offering (IEO) on the Huobi Prime platform. Notably, the platform received backing from some well-known investors. Specifically, the Coinbase Ventures venture fund, co-founder of PayPal, Peter Thiel, and YCombinator founder Sam Altman participated in the event.

On January 4, 2021, the United States Treasury’s Office of the Comptroller of the Currency announced that banks could operate independent nodes for distributed ledger networks and transact in stablecoins. The move has helped to drive more interest in these tokens as of late.

How to Buy Reserve Rights (RSR)

Reserve Rights (RSR) is available on the following exchanges:

Binance – Best for Australia, Canada, Singapore, UK and most of the world. USA residents are prohibited from buying Reserve Rights (RSR). Use Discount Code: EE59L0QP for 10% cashback off all trading fees.

How to Store Reserve Rights (RSR)

If you seek to make a major investment in Reserve Rights (RSR) or if you are planning on HODLing this crypto for long periods of time, a hardware wallet is a great option. Hardware wallets keep your crypto stored offline in “cold storage.” This strategy makes it impossible for online threats to access your holdings. The Ledger Nano S or the more advanced Ledger Nano X both support Reserve Rights (RSR).

Reserve Protocol on the Rise

The Reserve Protocol continues to gain momentum in the market due to its unique characteristics and capabilities. Recently, PayPal acknowledged they were in talks with the Reserve team. This news has only helped the platform’s positioning in the stablecoin sector. You can expect to hear more from the Reserve Protocol in the future as its RSV token gains more users.