Investing In OriginTrail (TRAC) - Everything You Need to Know - Securities.io

Connect with us
Origintrail 101:

Origintrail (TRAC) operates as a decentralized knowledge center. The network leverages a unique technical structure to bring together data providers, creators, holders, and those seeking this information in a streamlined manner. The goal of the project is to provide the world with an open-source, network-agnostic, secure way to share information and monitor networks.

Unlike many of the other projects under development in the sector, Origintrail is already in use by some major firms globally. Specifically, Home Depot, Walmart, and Target are signed on to use its supply chain and auditing services. The firm even inked a deal with the US Department of Homeland Security as part of their factory audit verification systems.

Origintrail officially entered the market via a token sale held on January 17, 2018. It was an immediate draw for investors for many reasons. As such, the protocol secured backing from some notable parties including Greg Kidd. Kidd is best known for his contributions to the Coinbase and Twitter networks. 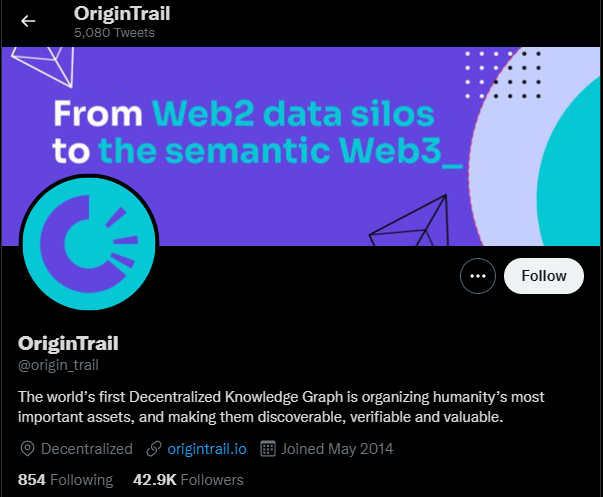 What Problems Does Origintrail (TRAC) Solve?

There are a lot of issues that Origintrail remedies. For one, it’s set up to help companies and users sort through the huge amount of data currently available. Data organization is more difficult today simply because there is so much more of it. When you have a data overload, it bogs down processing times which can reduce the ability of people to access this information when it’s most relevant.

Origintrail leverages vertical scalability and decentralized structure to create a means to capture, organize, share, and profit off of the billions of terabytes of data created daily. Using Origintrail, the worlds’ data assets to be structured, linked, stored securely, and put forth in an understandable way.

To accomplish this goal, Origintrail combines a variety of advanced technologies. The firm leverages AI to monitor data and help users find valuable info when they need it most. The protocol also incorporates oracles. Oracles are off-chain sensors that have the ability to communicate data to and from the blockchain.

Another area in which Origintrail can help reduce issues is network separation. There isn’t enough interoperability within data sets in the market. Currently, most databases operate as islands of information. Most lack the ability to communicate vital information between systems which causes the entire market to suffer. Origintrail provides users with a neutral protocol that enables data sharing between private and public networks. The system was built from the ground up to streamline searching vast amounts of linked data between organizations. By providing developers and enterprise clientele the ability to integrate permissioned and permissionless data, it enables them to customize their systems to better achieve their goals efficiently and better serve their clientele.

Transparency is another concern that Origintrail users don’t have to worry about. Aside from the fact that the platform is open-source, so you can vet the code directly, the protocol integrates Web3 protocols. Consequently, Origintrail is a neutral and trustless, decentralized, and customizable environment.

There are some key benefits that make Origintrail a project worth watching. For one, the project has already shown its worth in the logistics sector. The protocol can be used to provide tracking and verification services across different supply chains. Additionally, the network can integrate a variety of top-performing blockchains including Ethereum, Polygon, xDai, and, in the coming weeks, Polkadot according to company documents.

The development team behind Origintrail understood that privacy is the first step in keeping your assets safe. The system has a variety of cool privacy features to protect you and your data. For example, all sensitive data can be set to expire. Additionally, the protocol integrates zero-knowledge proofs. Zero-knowledge proofs enable systems to verify data without revealing any actual information about the data directly.

Users can secure ROIs by staking their TRAC tokens. The ability to stake was an addition that came along with the Version 6.0 ODN update. Those who stake their tokens receive a share of the network’s fees. Staking serves another role as well. It helps to reduce the number of tokens in circulation which helps to drive up demand and values. The Origintrail staking system is unique in that it was designed to incentivize network participants and to keep all parties honest.

How Does Origintrail (TRAC) Work

Origintrail utilizes a combination of features and technologies to run smoothly. The system combines a custom cryptocurrency, staking pools, blockchain technology, AI, and an easy-to-use interface as part of this approach. Origintrail also integrates a multi-layered structure that leverages a mainnet, a middle layer (ODN), and an off-chain technology stack to interface with legacy systems.

The ODN middle-layer protocol entered the market in December 2018. It holds a vital task within the Origintrail system. Specifically, it’s the layer that interacts with blockchains. The system is flexible in nature and can support interactions with Polkadot, Ethereum, HyperLedger Fabric, xDai, and more. Its also used to connect to off-chain data.

Anyone can become a data creator node and secure passive rewards at home when they join Origintrail. These nodes are responsible for validating the state of the network and transactions. They are also tasked with timely data delivery. Notably, each data creator node takes the information they receive and applies cryptographic data hash of the data to a blockchain. This hash further ensures data immutability.

When a user seeks out data on the Origintrail system, the network will automatically sort through the request and match it with nodes who meet the criteria. These nodes are then required to provide that data upon demand. The protocol randomly selects what node will get this responsibility and earn the rewards for their actions. 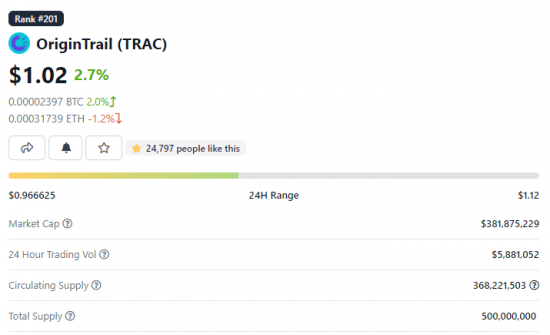 TRAC is the main utility token for the network. The token is used to pay fees, send value, and to compensate data providers and nodes. You can also use TRAC as collateral. There are 500 million TRAC slated for release in total.

How to Buy Origintrail (TRAC)

Origintrail (TRAC) is available on the following exchanges:

Journey on the Origintrail (TRAC)

You have to hand it to Tracelabs, the group behind the Origintrail project. The system compensates users for their efforts and serves a vital role in improving business systems. The fact that the network can integrate multiple top-performing blockchains and legacy business systems is another huge plus. These benefits and many others continue to make Origintrail (TRAC) a project to watch in 2022.