Investing in Monero (XMR) - Everything You Need to Know - Securities.io

Connect with us
Monero 101:

Monero (XMR) was one of the first privacy coins in the world. This unique cryptocurrency pioneered multiple technologies to accomplish this critical task. Today, privacy is more important than ever. Consequently, Monero is also one of the most popular cryptocurrencies on the planet.

Monero is the cryptomarket’s answer to Bitcoin’s lack of privacy. For a long time, people believed that Bitcoin transactions were anonymous. Nowadays, most people understand that this is not the case. In reality, there are a plethora of tools and services one could employ to unmask the person behind particular Bitcoin transactions.

Monero takes a different approach to the market. This coin makes privacy its main component. This strategy continues to make Monero the top coin for anyone seeking to maintain their privacy within the sector. In fact, the anonymization protocols found in Monero are so effective that people will often use them to help obfuscate their ownership of other cryptocurrencies as well.

Monero utilizes advanced cryptographic functions to ensure that no one can link you to a Monero cryptocurrency transaction. Interestingly, this technology enables the Monero blockchain to send and receive transactions in a manner that doesn’t reveal the data directly to onlookers. Remember, Monero’s blockchain is also subject to real-time monitoring similar to Bitcoin via block explorers. 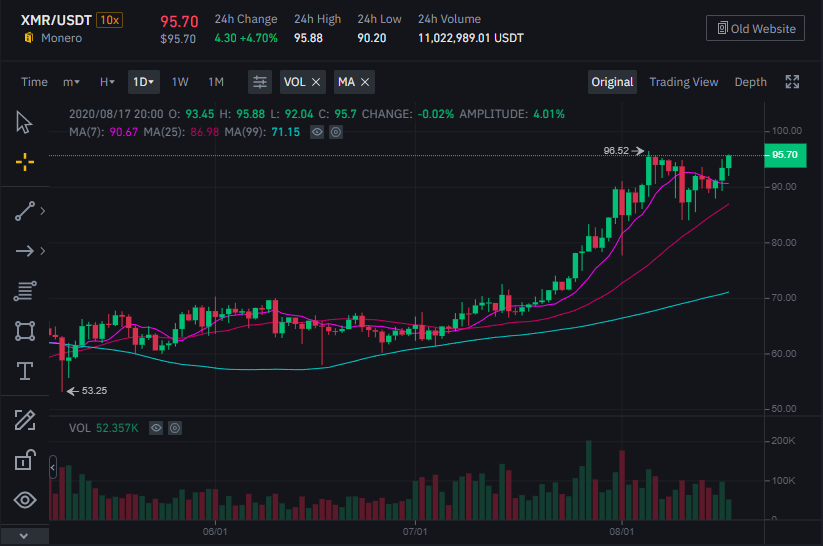 Monero developers were able to accomplish this monumental task through the integration of advanced fungibility protocols. Fungibility is a critical feature in most cryptocurrencies. Fungibility is the ability of a good or asset to be interchanged with other individual goods or assets of the same type.

For example, most commodities such as oil, wheat, or gold are fungible. If you owned 1000 gallons of oil, it wouldn’t mean that you needed to receive the exact gallon that you originally held. You just need to receive the same amount of oil because it holds the exact same value. Crucially, cash is fungible, that’s what makes it so difficult to trace cash transactions in the real world.

Monero takes fungibility a step further. Fiat currencies such as the US dollar contains some form of identifying markings such as serial numbers. This data allows governments and other interested parties to trace the history of a particular bill in essence. As long as the organization makes notes of the serial number before a transaction, they can then confirm that the notes are the exact ones at a later date.

In Monero, fungibility goes a step further. There is no way to determine what Monero was in what transaction. There are no serial numbers and all transactions undergo vigorous anonymization. In this way, Monero provides the world with a new level of privacy previously unimaginable.

The history of Monero begins in 2012. At this time, the concept of privacy coins had just begun to enter the market. People began to realize that “in a digital economy, privacy equals liberty.” As such, the Monero journey begins with a different project known as Bytecoin.

Bytecoin was revolutionary for multiple reasons. Primarily, it was the first digital currency written using a technology called CryptoNote. CryptoNote combined several keys in a single transaction to make it more difficult to determine who sent what where. The concept of grouping public keys together was unheard of at that time. Today, CryptoNote technology is the backbone for most of the privacy-based cryptocurrencies in the market.

While the Bytecoin concept was a major success, there were other aspects of the coin’s launch strategy that didn’t go as well. Specifically, there were discrepancies between developers regarding the initial distribution of the coin. In the end, Bytecoin issued 80% of its coins during launch. This decision split the Bytecoin camp and led to the creation of another privacy coin – Bitmonero.

In total, the Bitmonero project encompassed seven high-level blockchain developers. Of these seven, only two of their identities are known to the public. The main developer behind the project is Riccardo Spagni (FluffyPony). The development team also included long time crypto enthusiast David Latapie.  Shortly after launching the new platform, developers decided to drop “Bit” from the title and go with simply “Monero” as the project’s name. Notably, Monero means “coin” in Esperanto.

Monero is a permission-less open-source blockchain. The platform is able to remain private because of its ability to continually update its technology. Interestingly, Monero’s software updates every six months. In this way, developers can introduce cryptographic advances. Here are some of the technologies that make Monero so great:

Ring Signatures are a revolutionary advancement in cryptographic anonymity. This protocol combines the digital signature of the sender with the signatures of other users. This system adds 10 signatures to every transaction group. Then all the signatures mix prior to their official entry onto the blockchain.

Notably, the Ring Signatures concept continues to evolve. In the past, developers experimented with altering the number of signatures involved in this mixing process. There was even a brief period of time when users could determine how many signatures to mix on a transactional basis.

Another core technology behind Monero is Stealth Addresses. This protocol publishes one address that automatically creates several one-time accounts for every transaction. Then, the user’s wallet references a password known as the View Key to scan the blockchain to identify any transactions relevant to its existence.

In 2017, Monero’s development team introduced another game-changing technology called RingCT (Ring Confidential Transactions). This coding hides the exact amount of XMR users exchanged in transactions before they become available for review on the blockchain. To accomplish this, the protocol introduces multiple inputs and outputs to a transaction. When combined with Stealth Addresses and Ring Signatures, the three technologies make Monero nearly impossible to trace.

Another huge advantage Monero brings to the market is unlimited scalability. Scalability is the ability of a currency to handle more users in the future. In the past, Bitcoin experienced scalability issues that caused the network to delay and fees to rise extraordinarily. Bitcoin was unable to meet the scalability demands at the time for many reasons. Primarily, it can only handle blocks of transactions up to 1MB.

Reversely, Monero has no pre-set block size. Miners can determine how big of a block of transactions they desire to approve. However, recently, developers introduced a block reward-penalty system. The penalty takes into account the median size of the last 100 blocks. If the next block is larger than this total, a penalty reduces the mining rewards for that block. This strategy is meant to discourage nodes from entering spam onto the blockchain.

CryptoNite revolutionizes the way in which miners participate in the market. Unlike Bitcoin, ASIC (Application Specific Integrated Circuits) are of little use. Remarkably, Monero can be profitably mined using both CPUs and GPUs. The CryptoNight consensus mechanism prevents centralization in the mining sector. In this way, Monero has the potential to be more decentralized than Bitcoin in the future.

Monero uses a combination of keys to make its network function anonymously. Specifically, Monero introduces a public view key, a private view key, and both public and private spend keys.  Private spend keys are used to create outgoing transactions. Whereas, private view keys allow users to check the blockchain to verify they received their funds. You will also need a public spend key to verify your signature and stealth public key.

Currently, there are 17,669,037 XMR in circulation. Unlike most cryptocurrencies, there is no pre-set total supply of Monero. Instead, developers chose to increase the total amount of coins by .87% the first year. Each following year this percentage lowers. At this current rate, it will take another 115 years before Monero doubles its current supply. 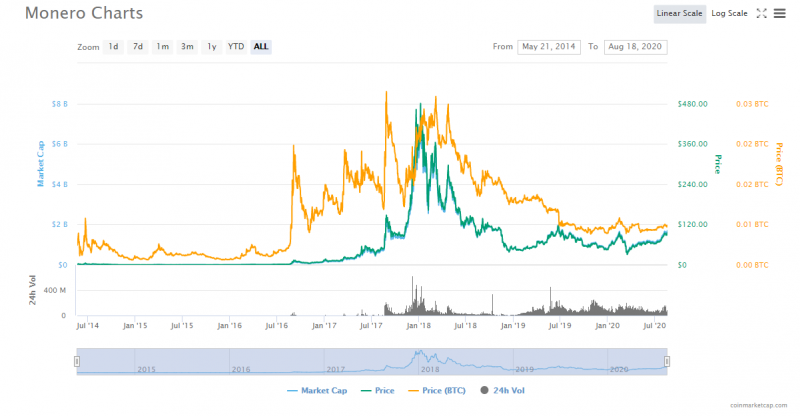 How to Buy Monero (XMR)

Monero (XMR) is available for purchase on the following exchanges:

Binance – Best for Australia, Canada, Singapore, UK and most of the world. USA residents are prohibited from buying Monero (XMR). Use Discount Code: EE59L0QP for 10% cashback off all trading fees.

How to Store Monero (XMR)

If you seek to make a major investment in XMR or if you are planning on HODLing this crypto for long periods of time, a hardware wallet is the best option. Hardware wallets keep your crypto stored offline in “cold storage.” This strategy makes it impossible for online threats to access your holdings. The Ledger Nano S or the more advanced Ledger Nano X both support Monero (XMR).

Monero showed the world the importance of privacy coins. Consequently, it helped spark the privacy coin explosion. Notably, there are over 63 different privacy coins available for trading in the market today. Impressively, these projects encompass over $2 billion in value.

As you could expect, not everyone is on board with the concept of private transactions. Recently, the IRS poured millions into developing systems to help identify these individuals.  A recent posting on the government’s official contracting website shows that the Criminal Investigation Division (CID) of the IRS seeks to hire multiple private contractors to gain more transparency into privacy coins transactions.

Monero has taken heat in other regions of the world as well. Last week, Russian regulators announced the successful launch of a prototype blockchain tracking system that can unravel both Monero’s and DASH’s security protocols. Regulators claimed that the software was necessary to fight drug trafficking and other illicit activities.

Monero in the Future

Despite the fact that governments are not big fans of anonymous transactions, there is still a huge draw for this cryptocurrency. Three weeks ago, in an interview with Peter McCormick, Coinbase CEO Brian Armstrong disclosed that US regulators prevented the exchange from listing XMR. Armstrong cited that other non-US-based exchanges such as Binance offer the coin with success.

In every industry, there is a platform that takes the needs of the user and places it above all other concerns. In the crypto industry, that coin is XMR. Monero continues to provide the world with a safe and anonymous way to protect privacy, even when the powers of the world would have it otherwise. In this way, Monero shoulders real risks to provide its users with more freedom, and for that, they deserve a Thank You.