Investing In JasmyCoin (JASMY) - Everything You Need to Know - Securities.io

Connect with us
JasmyCoin 101:

JasmyCoin (JASMY) combines blockchain technology with the IoT (Internet of Things) to provide businesses and users with more ROI opportunities in the market. This decentralized network for IoT devices enables developers to create more robust sharing economies. The goal of the project is to create a secure platform where data can be exchanged in a trustless manner between IoT devices and decentralized protocols.

IoT units are the billions of smart devices in the world. These items can include anything from your Smartphone, self-driving car, to a smart toaster or other household items. Notably, the IoT market is on the rise. There are currently over 2 billion IoT devices in use globally. Analysts predict these numbers to double in the coming years as advancements in high-speed internet and manufacturing processes make integrating this technology more feasible.

Notably, to consider an item “smart” it must have sensors, the internet, and the ability to communicate data. There are all types of IoT sensors in use today. For example, there are IoT devices that can send and receive detected and measured data in conjunction with other sensors. These IoT devices can also remotely initiate processes. When an IoT sensor is connected to a blockchain it’s known as an oracle.

IoT business models provide a new level of manageability and efficiency to the market. However, in the past, the centralized nature meant that bad sensors could throw an entire system off. Luckily, decentralized options have the ability to cross-reference oracle data. This approach enables firms to solve management issues more efficiently.

What Problems Does JasmyCoin (JASMY) Solve?

There are many issues that JasmyCoin seeks to alleviate. For one, it provides a higher level of safety and security to the market. The use of IoT devices can help to reduce fraud and counterfeiting in markets. For markets such as the medical field, where thousands die yearly from counterfeit drugs, there is a real demand for these services.

Currently, the logistics sector is run by major firms that have a tight grip on the market. They operate with impunity and in many instances are monopolies. Giant platforms such as Google, Apple, Facebook, and Amazon leverage their position to set high fees and block out competition.

JasmyCoin provides a viable alternative to the status quo. Users can save on fees and improve their response and management capabilities when they integrate these next-generation protocols into their logistics strategy. JasmyCoin operates as pure code, meaning that everyone has a fair and free opportunity to use its services.

One of the main issues that JasmyCoin users avoid is a lack of consumer data. Companies like Facebook can take your consumer-oriented information and use it against you without your permission. They say their services are free but instead, they weaponize your information to serve custom-built advertisements.

JasmyCoin enables you to regain control over your private information. Users can select what firms may use their data and they receive compensation for this valuable information. This approach is fairer and more transparent than what’s in use today by most tech firms currently.

A Lack of Data Democratization

JasmyCoin takes data sovereignty to an entirely new level. The protocol does away with users needing to put their faith in a platform’s centralized system. One of the main goals of the project is to put people back in charge of their data. 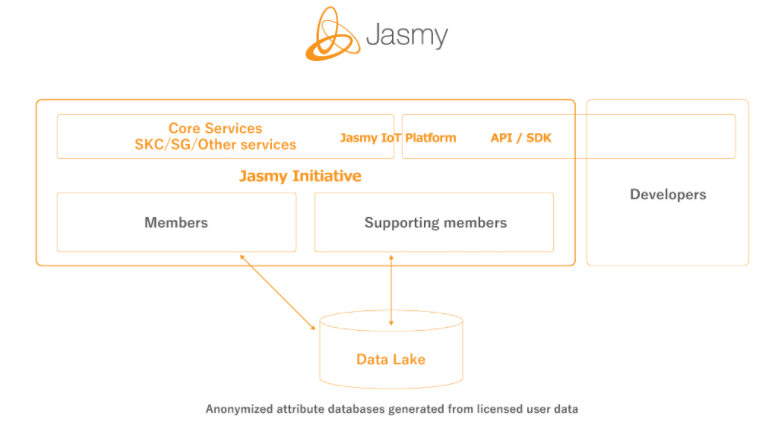 Along the same lines of thought is data misuse. Nobody can say for sure where large social media and tech firms send their data. This data gets tracked, collected, and analyzed but from there the trail goes cold. This information could one day be used in scenarios where governments or large firms want to seek out people that meet certain criteria.

Data theft is on the rise as well. There have been billions in personal data stolen from major tech firms over the last two years. These losses were leaked due to cyber-attacks, system defects, and human mistakes that were avoidable. The best way to eliminate these issues is to ensure that your data remains in your control.

Jasmy will provide client companies with base modules such as IoT communication modules and wearable devices. These units are prebuilt to meet the functions required to build IoT systems without undue burden. The firm will also provide licenses for these items.

JasmyCoin benefits IoT (Internet of Things) platforms significantly. The protocol provides another layer of validation to all data received from these firms. As such, it’s ideal for use in next-gen companies such as the automatic driving and robotics industries.

Users secure real ROIs when they leverage JasmyCoin’s services and features. You can stake JASMY and secure 55% APY. Currently, users can stake the token on popular CEXs including KuCoin.

How Does JasmyCoin (JASMY) Work

JasmyCoin operates as a decentralized network. The protocol integrates strategies such as edge computing to improve IoT devices’ responsiveness. The network includes an easy-to-navigate interface that simplifies managing and operating IoT devices across large networks.

JasmyCoin offers two core services, Secure Knowledge Communicator (SKC) and Smart Guardian (SG). Both of these protocols enable you to retain control over your data and helps to prevent misinformation from IoT devices. 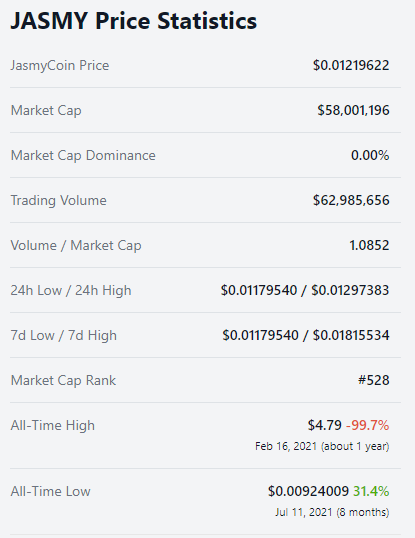 JASMY is an ERC-20 token that serves a vital role as the premier utility token for the network. The token can function as a cryptocurrency to send value globally as well. JASMY has a maximum supply of 50 billion tokens over the life of the project.

The Jasmy Corporation is a Tokyo-based Internet-of-Things (IoT) provider. JasmyCoin entered the market in 2016. The project is the brainchild of former Sony executives. The company’s representative director Kunitake Ando was the 7th president of Sony Corporation. He was involved in a variety of popular projects including VAIO, Xperia, Sony Life Insurance, and more.

How to Buy JasmyCoin (JASMY)

JasmyCoin (JASMY) is currently available for purchase on the following exchanges:

Binance – Best for Australia, Canada, Singapore, UK and most of the world. USA residents are prohibited from buying JASMY. Use Discount Code: EE59L0QP for 10% cashback off all trading fees.

JasmyCoin is a perfect example of how IoT and blockchain technologies can work together to improve business systems. JasmyCoin is not the first blockchain-based IoT network to go live but it is one of the most recognized. The protocol continues to find new users as it expands its features and services. You can expect to hear more from this team in the coming weeks.