Investing in IOTA (MIOTA) - Everything You Need to Know - Securities.io

What is IOTA (MIOTA)?

IOTA (MIOTA) is a different kind of cryptocurrency. Unlike competitors, IOTA doesn’t utilize blockchain technology to accomplish its tasks. Instead, the platform relies on various Internet-of-Things (IoT) applications. As such this platform has unmatched scalability and endless use cases in the market.

Notably, the co-founders of the project, Sergey Ivancheglo, Serguei Popov, David Sønstebø, and Dominik Schiener didn’t originally plan to host a cryptocurrency or even a decentralized network for that matter. Instead,  IOTA started off as an IoT hardware chip manufacturer. These systems could record and execute transactions between machines and devices within the Internet-of-Things (IoT) ecosystem.

After recognizing the potential of an IoT network, the firm changed its focus to expanding the decentralized network aspects of this technology. IOTA allows developers to further explore use cases scenarios and different functionalities of IoT and their interfaces. Consequently, IOTA plays a pivotal role in the further adoption of this revolutionary technology.

The Internet-of-Things is a term used to describe the billions of smart devices in the world today. Any device can be made “smart” through the addition of embedded sensors and the ability to communicate with the internet. Interestingly, the IoT concept originated way back in 1982. This is the moment when a group of savvy developers from Carnegie Mellon University decided to add sensors to the campus vending machine. 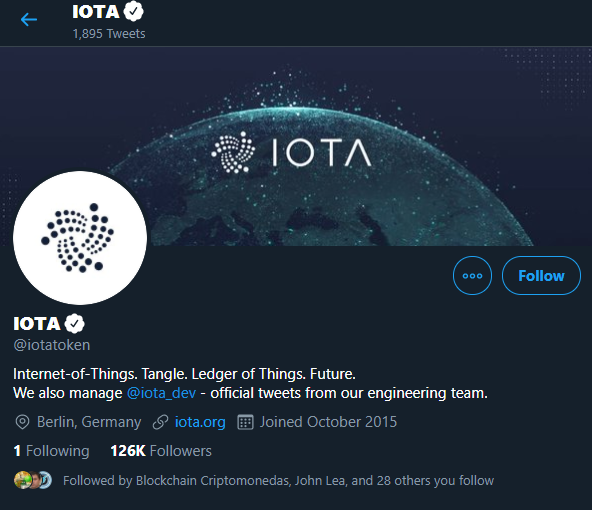 IoT as its known today took flight in 2008. This was the time that highspeed internet connectivity and “smart” devices became affordable, stable, and fast. Today, IoT sensors allow firms to save millions in monitoring and data transmission costs. These networks are more popular than ever because they streamline and automate critical business systems in ways previously unimaginable.

IoT is Here to Stay

According to recent statistics, the IoT community encompasses 20.4 billion devices globally. Impressively, the market revenue for this sector is $212 billion with stark growth predicted for the future. To give you an example of the level of expansion analysts predict, you need not look any further than how far these systems have come. For example, in Q1 2019 alone, Amazon sold over 100 million Alexa-enabled devices to its clients. There are now endless smart devices for consumers to utilize in the market.

What Problems Does IOTA Solve?

IOTA (MIOTA) attempts to rectify some glaring issues facing the IoT and blockchain sectors. For one, it provides developers an alternative to blockchain networks for the programming of Dapps. This diversification allows for a better distribution of information.

In its current state, IoT data is very compartmentalized. There is very little exchange in the way of data sharing. However, IOTA introduces standards and provides a reliable and affordable way for all of these devices to leverage other sensors in the network efficiently, This strategy opens the door for some pretty amazing functionalities.

For example, imagine if your smart fridge was able to sense that you were running low on milk. The fridge could then send a request for another gallon either to your smart car or the grocery store’s ordering platform. From there, your smart car could cruise over to the store and pick up your order, or the store could send a drone with your order directly to your doorstep. All of this and more is possible through the advancement of IoT networks. Best of all, you could track everything directly from your smartphone.

Scalability is another major issue that IOATA eliminates. The platform’s unique structure means that as more users join the network, the platform becomes faster and more stable. In comparison, today’s blockchains experience slow transaction times and higher fees whenever there is a major influx in users. In 2017, Bitcoin’s network was forced to a crawl due to congestion issues. IOTA’s technology eliminates these concerns because it has the capability to meet the demands of a global economy.

How Does IOTA (MIOTA) Work?

In theory, IOTA is very simplistic. The platform functions as a bridge between IoT devices. Specifically, the network can handle data transmission to and from connected devices in the IoT ecosystem. The network is also able to execute complex, multi-device smart contracts directly. To accomplish this task, the network relies on a new technology known as Tangle.

Tangle is the consensus mechanism for IOTA. This protocol functions as a directed acyclic graph (DAG) that gives the network incredible resilience. In a Tangle network, miners are replaced by a central coordinator. This coordinator gathers data from the system of nodes and utilizes it to confirm transaction validity. This code is what makes IOTA one of the fastest and most expansive blockchains ever developed. 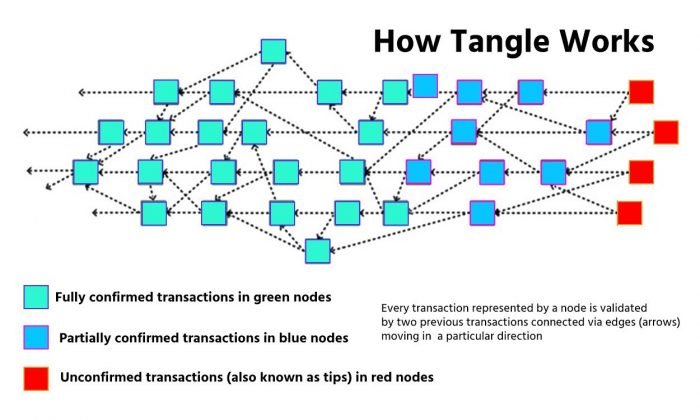 At the core of the IOTA ecosystem is the Data Marketplace. This is the hub where IOTA sensor developers can securely sell and access active data streams known as MAM (Masked Authenticated Messaging) encrypted data. The goal of the decentralized data market place is to make MAM data available to any compensating party.

Best of all, this data is being collected and traded in real-time. Programmers can make highly responsive applications using this data. Additionally, this strategy is far more efficient than separate sensors attempting to sell data via their own offerings. It organizes this vast sensory system in a way that is conducive to future expansion.

MAMs are at the core of IOTA’s functionality. These Data sets enable a trustless system for users to share information and value in a peer-to-peer fashion. Best of all, the network maintains a high level of security, and all MAMs trade via encrypted channels. Additionally, the source identity of the MAM is private. In this way, the network is better able to maintain integrity across all aspects.

The Bosch XDK open-source code is the protocol that links MAMs and the Data Marketplace. This integrated system provides developers with the ability to construct programmable sensors and communicate the data throughout the network. In this way, IOTA fulfills its purpose to act as an Internet of Things prototyping platform.

IOTA developers have untethered access to the platform’s impressive suite of sensor programmability. Currently, the platform supports programming of MEMS sensor technology, WiFi, BLE, an SD Card Slot, and ready-to-use software packages. In his way, IOTA acts as a full spectrum sensor node solution that has the capability to collect specific real-time data. This information can then be sold via the Data Marketplace.

MIOTA is the main utility token within the IOTA sphere. This cryptocurrency is used to account for transactions, pay fees, and initiate smart contracts. There will be a total of 27 quadrillion IOTA issued over the life span of the project. In essence, IOTAs structure makes its expandability limited only by the flexibility of its programming languages.

Benefits of Investing in IOTA (MIOTA)

There are a ton of benefits users get when they invest in IOTA. For one, the design of the network eliminates all transaction fees. Additionally, the network is very fast. Combined, IOTA has near-unlimited scalability. It’s also far more energy-efficient than blockchain-based cryptocurrencies.

The IOTA project’s history actually begins with the Jinn project. Jinn entered the market as an IoT general-purpose processor developer. In  September 2014, Jinn hosted a crowdsale event that secured the project $250,000 USD for future development. However, at the time, there was little oversight and zero regulatory framework to follow in terms of the company’s ICO. This situation led Jinn to receive some regulatory pushback for the event.

In October 2015, Jinn made the smart move to rebrand as IOTA. The platform officially entered the market via a token sale that netted $500,000 USD for the network. This go-around, developers were keen to promote the utility token aspects of the project to avoid future problems from regulators.

Two years later, the IOTA Foundation was formed. The goal of the foundation is to further IOTA market penetration in all sectors. Notably, the foundation’s creation was only possible because IOTA token investors donated 5% of the total token supply. Today, the IOTA foundation plays a vital role in the market.

For example, the foundation is a board member of the International Association for Trusted Blockchain Applications (INATBA). This organization plays a vital role in the development of blockchain legislation and other crucial developments across the sector. It’s a nod of respect and quality that IOTA is a member of this exclusive organization.

In January 2018, IOTA was victim to a major hack. In the incident, $10 million USD worth of IOTA tokens was stolen. The hackers were able to infiltrate a seed generator to make off with the ill-gotten gains. However, unlike most crypto hackers, authorities caught this individual a year later. The hacker turned out to be a 36-year old man living in Oxford, England.

The hack caused developers serious grief as investors assumed the hack was the result of faulty programming on the part of IOTA developers. Importantly, this was not the case. In this instance,  IOTA itself was not compromised. The public-facing nodes on its network were placed under a Distributed Denial of Service (DDOS) attack from hackers. The plan worked because they had already stolen user credentials through phishing.

A year later, another attacker took aim at IOTA. This time, hackers exploited a vulnerability in a mobile and desktop wallet managed by the IOTA foundation known as Trinity. The hacker was able to steal almost $2 million USD worth of IOTA before developers pumped the breaks on their operation. The hack was so severe that IOTA shut down its entire network for almost ten days to correct the vulnerability.

How to Buy IOTA

Iota (MIOTA) is currently availably for purchase on the following exchanges.

How to Store IOTA (MIOTA)

IOTA investors enjoy a nice selection of storage options. If you are a casual trader that only seeks to dabble in IOTA trading at this moment, you may find that the most convenient option is to leave your crypto on your exchange.

A better alternative is to consider a reliable mobile wallet. Mobile wallets are the most popular crypto storage method currently because of their convenience. Additionally, most of these platforms charge no download fees. Some of the best mobile wallet options for IOTA include GUI Light and the Nostalgia Light Wallet.

If you seek to make a major investment in IOTA or if you are planning on HODLing this crypto for long periods of time, a hardware wallet is the best option. Hardware wallets keep your crypto stored offline in “cold storage.” This strategy makes it impossible for online threats to access your holdings. The Ledger Nano S or the more advanced Ledger Nano X both support IOTA.

IOTA’s unique approach to the decentralized sector is a refreshing break from the norms. A quick glimpse at the technical aspects of this platform and it’s easy to see why IoT-based decentralized networks are sure to see more adoption moving forward. For now, IOTA remains one of the coolest projects in the market.