Investing in EOS (EOS) - Everything You Need to Know - Securities.io

EOS is a next-generation blockchain ecosystem that continues to receive heavy media coverage for its record-breaking ICO and unique characteristics.  Importantly, the EOS.IO ecosystem entered the market with the goal to simplify the programming and integration of smart contracts and the development of decentralized applications (Dapps).

One of the most amazing aspects of the EOS.IO platform is that it virtually eliminates transaction fees through its unique structuring. Additionally, the platform is hugely scalable. Reports confirm that EOS.IO can outperform major credit cards such as Visa in terms of transactions per second. In this way, EOS provides the perfect foundation for Dapp developers.

Dapps are protocols designed to function across decentralized networks such as tor or blockchains. These applications differ greatly from their centralized ancestors because they require no centralized support to operate. Dapps rely on a set of standards to ensure interoperability within the sector. In this way, Dapps provide the world with a more inclusive approach to the market. 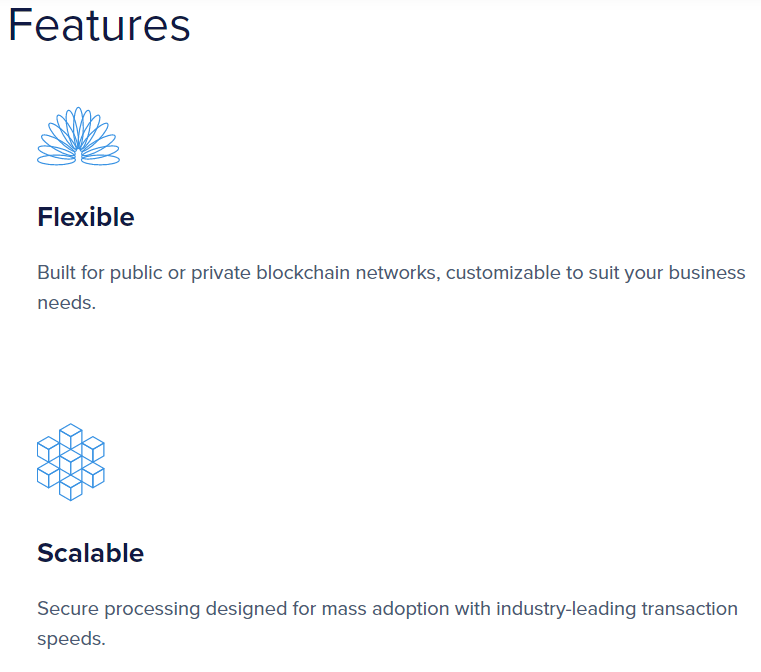 Similarly to Ethereum, EOS.IO functions as a sort of operating system for these decentralized applications. The platform includes sets of the most popular services and functions required by Dapp developers today. This strategy simplifies the entire Dapp programming process considerably.

EOS combines many of the most admirable features from some of the most popular blockchain in existence. Developers tout that the protocol has the security of Bitcoin, combined with the ease of programming found in Ethereum. On top of all of these impressive claims, the platform possesses scalability that surpasses Ripple’s capabilities.

Together all of these features make EOS one of the ultimate Dapp platforms available today. Supporters of this revolutionary protocol have even dubbed EOS the “Ethereum killer.” While EOS does offer upgrades to many of Ethereum’s core functionalities, there is still a long way to go before EOS is in a position to move Ethereum from the spot as the top Dapp platform.

The history of EOS begins in 2017 with the issuance of the company’s whitepaper. In the paper, developers explain their goal to introduce a Dapp development platform capable of securely processing thousands of transactions per second. Importantly, EOS seeks to become the premier operating system for decentralized applications. Consequently, EOS includes some valuable features such as integrated user authentication, cloud storage, and server hosting.

EOS is a blockchain-based open-source software released on June 1, 2018. Uniquely, EOS chose to take a different approach to the market during its record-breaking ICO. The ICO, which lasted an entire year, started officially on June 26, 2017. During the year following the launch, one billion tokens were distributed as ERC-20 tokens by Block.one.

At this time the EOS.IO blockchain was non-existent, so developers chose to issue the token on Ethereum’s blockchain to raise funds. The strategy paid off in a major way with EOS securing over $4 billion during the event. Notably, these funds went directly to the completion of the EOS blockchain and ecosystem

Notably, EOS.IO is a subsidiary of the private blockchain firm Block.one. The firm is registered in the Cayman Islands currently. Interestingly, the Chief Technology Officer of Block.one is none other than crypto star Daniel Larimer. If Larimer’s name sounds familiar, it should.

He is one of the most influential players in the crypto space. He was paramount in launching both Bitshares and the blockchain-based social media platform, Steemit. Both platforms are hugely popular in the space today. Larimer also helped develop the delegated proof-of-stake consensus mechanism that was later adopted by EOS.IO.

He is also largely credited with the decentralized autonomous corporation concept. In this concept, smart contracts take over the functionalities of most corporate activities. There is no doubt that his network and experience helped catapult EOS into the spotlight as one of the world’s premier cryptocurrencies.

How Does EOS Work?

The EOS ecosystem incorporates a full-featured authentication system. Developers can program user accounts and give each account a preset permission level directly from the EOS panel. This is a critical component for most Dapps today.

Additionally, the platform allows businesses to share database access to anyone on the network. Reversely, companies can also take data from the EOS network and choose to store the data locally. In this strategy, the data remains off the blockchain until the company desires.

Another important tool included with the EOS development package is cloud storage. EOS.IO provides Dapp developers with both server hosting and cloud storage as part of its all-inclusive approach to the market. These critical components of the EOS.IO ecosystem make it one of the fastest-growing Dapp protocols today.

This layout allows developers to build and deploy applications with ease. Developers gain access to everything they need directly at their fingertips. Features such as hosting, cloud storage, and download bandwidth make development a breeze. In turn, this approach frees up developers to focus on the functionalities of their Dapps rather than hardware concerns.

Additionally, EOS integrates advanced analytics to help developers monitor their Dapps performance. A thorough review of this data provides valuable insight to developers on how to improve their applications. Importantly, all of these features are paid for by simply staking EOS tokens in an approved wallet.

A New Type of Consensus

Developers of the EOS platform decided to shy away from the power-hungry consensus mechanism in place on the Bitcoin blockchain. This protocol is known as the Proof-of-work consensus mechanism. It requires a computer to compete against each other to complete complex mathematical equations.

This use of computational power used during the solving of this equation equates directly to more energy consumption. In the case of Bitcoin’s blockchain, the network consumes more electricity than Denmark. Luckily, over 80% of Bitcoin’s mining energy comes from renewable sources.

Recognizing the limitations of a PoW system, EOS developers decided to go with another option. The Proof-of-Stake consensus mechanism goes about validating a blockchain’s state in a different manner. In a PoS system, miners don’t compete at all.

Instead, those seeking to become transaction validators acquire EOS tokens and “stake” them in their wallets. Staking is the act of holding your cryptocurrency in a wallet. Notably, the more EOS you stake, the better your chances are that you will get to approve the next block of transactions and receive the reward.

In this manner, EOS is able to deter attackers. Anyone who would want to attack the network would first need to purchase large amounts of EOS and stake the coins. In the end, they would only hurt their own interests if the network becomes compromised.

Traditional cryptocurrencies such as Bitcoin depend on their nodes to validate the state of the blockchain via consensus. The way Bitcoin accomplishes this task is through the use of nodes who continually confirm every transaction on the blockchain in intervals. While this strategy is extremely secure, it does introduce some serious scalability concerns.

EOS avoids these concerns in an interesting way. The platform focuses on each transaction rather than on the entire state of the blockchain. EOS.IO nodes verify the series of events to ensure that the network state remains pure.

When nodes restart, they fully reconfirm the entire state of the blockchain. This strategy does take longer to confirm the total state of the blockchain when compared to a PoW system. However, since most nodes are simply verifying the series of events, the network is able to handle thousands of transactions per second. In comparison, BTC can handle only 7 transactions per second.

Everything about the Eos protocol maximizes performance. For example, blocks of transactions are produced every 0.5 seconds. In Bitcoin, block approval takes 10 minutes. This delayed block time has been a point of contention within the network and has led to various hard forks over the years.

Another important aspect of EOS is its governance model. In the EOS.IO system, block producers have a lot of control over the direction of the network. These block producers vote on relevant issues. These issues can include which transactions are confirmed or whether an application is running correctly.

Voting rights also extend to major network concerns such as changes to the source code of individual applications. In this way, block producers control when to upgrade, downgrade, and fix bugs in the system. All of this is handled in a democratic manner using the EOS.IO system.

Today the EOS.IO ecosystem encompasses over 100 Dapps. The most active at this time is PRA CandyBox with just over 6,000 active users a day. Notably, this Dapp has 6X more daily users than Ethereum’s top Dapp – the IDEX decentralized exchange.

Importantly, EOS tokens differ from the competition in that they don’t actually perform a function. Instead, developers developing applications on the platform use them to generate the tokens needed for their specific applications.

Given its multibillion-dollar ICO, it’s no surprise to learn that most of the major exchanges listed EOS tokens early on. In April 2018, the platform officially launched its main net. The launch drove EOS prices to a new all-time high of $21.46.

How to Buy EOS

EOS (EOS) is available on the following exchanges:

Where to Store Your EOS

If you seek to make a major investment in EOS or if you are planning on HODLing this crypto for long periods of time, a hardware wallet is the best option. Hardware wallets keep your crypto stored offline in “cold storage.” This strategy makes it impossible for online threats to access your holdings. The Ledger Nano S or the more advanced Ledger Nano X both support EOS (EOS).

AS with all major projects, there are some concerns surrounding the EOS ecosystem. Primarily, the community continues to point out huge centralization within the newly adopted delegated-Proof-of-Stake system. This system creates 20 main block validators within the network.

Additionally, EOS ran into some issues with the SEC earlier in the year. The firm’s parent company Block.one received a hefty $24 million penalty by the SEC for conducting an unregistered securities sale. Not surprisingly, EOS paid the fine and went along with business as usual.

EOS – The Beginning of an Empire

The combination of EOS’s unique characteristics and its highly experienced team of developers makes this one of the most highly revered projects in the cryptospace. The developers behind this concept thought of nearly everything needed to make the Dapp programming experience as easy as possible. As such, you can expect to see the EOS ecosystem expand over the coming years.

The Future of EOS

Will EOS ever surpass Ethereum and become the #1 Dapp provider in the market? That’s a hard question to answer. Regardless, EOS continues to garner support from across the sector. For now, EOS seems focused on its goal to bring Dapps to the masses in a safe and secure manner.

Related Topics:EOSEOS.IOinvesting in
Up Next

How to Buy EOS (EOS) in Australia