Investing in Enjin (ENJ) - Everything You Need to Know - Securities.io

What is Enjin (ENJ)?

Enjin (ENJ) is a decentralized ecosystem designed to streamline the integration of enterprise blockchain technologies. The network is referred to as a PaaS (Platform-as-a-Service) by developers due to its structure and features. Notably, Enjin enables businesses to leverage blockchain infrastructure without the need to write any blockchain-related code. By eliminating the technical and financial barriers associated with these tasks, Enjin enables anyone to trade, monetize, and market using blockchain-based strategies.

Uniquely, Enjin’s development team has decided to focus its efforts on the gaming sector. Currently, the firm specializes in helping developers and studios to utilize tokenized digital assets in their titles. These protocols improve the UX and help to further acquisition, retention, engagement, and monetization strategies for developers. Consequently, Enjin has become an effective way for development firms to increase revenue opportunities and gain a competitive edge in this highly congested industry.

Enjin also operates a social aspect. Users can organize clans for their favorite titles utilizing the Enjin Network. Currently, the platform supports hundreds of thousands of communities globally. Specifically, Enjin’s network has expanded to include +40 gaming firms today. In this way, Enjin connects the growing ecosystem of creators, buyers, and sellers via pioneering decentralized initiatives.

There are some excellent benefits that Enjin brings to the market. The system is designed to remove technical barriers. Developers are free to manage, explore, distribute, and integrate blockchain assets within their games using the platform. The intuitive interface simplifies many of the core development processes and allows development teams to provide new and exciting opportunities to their users.

One of the main reasons that a firm would want to include Enjin digital assets in their gaming platform is that it provides real ROI opportunities. In the past, players would spend hours building up characters. When they were done playing the game, these characters would be relegated to oblivion. Now, these users can get paid for all of their efforts. Build up your character and sell or trade it on the marketplace to earn profits.

Enjin’s approach is also beneficial to developers. For one, it provides them with an easy way to integrate additional monetization options. Users are more willing to pay for assets when they know they can resell them in the future. The very chance of appreciation can also help developers charge more for their in-game assets.

The Choice is Yours – Enjin (ENJ)

Developers are excited to learn that Enjin supports the integration of an excellent selection of coins. The protocol supports Bitcoin, Ethereum, Binance Coin, Litecoin, Enjin Coin, and ERC-20, ERC-721, and ERC-1155 tokens. Developers can use Enjin to weave these coins seamlessly within their digital landscapes. Imagine a gamer’s delight when they stumble upon a Bitcoin while exploring. Now imagine the hype this windfall would bring to the game’s community. 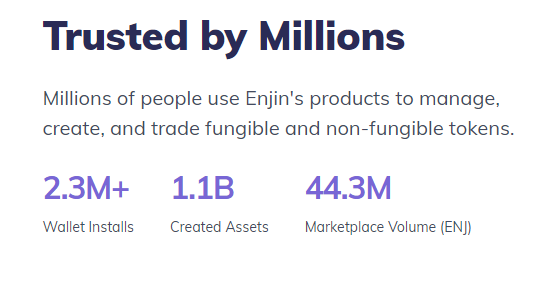 Along the same line of thought, Enjin streamlines the entire payment process. Rather than going through the red tape and delays of integrating fiat payment processes into games, developers can now charge for features using cryptocurrency.

This strategy brings with it more efficiency and fewer fees. Game developers can reach a global audience and receive their payments in near real-time. In this way, Enjin eliminates the middleman and enables developers to provide more options.

Scalability was a serious concern for Enjin’s development team. To be able to operate across huge gaming networks, the blockchain needed to be able to handle thousands of transactions per second. To accomplish this task, Enjin introduces a Proof-of-Stake mechanism that validates blocks every six seconds.

Enjin has taken a focus on the integration of Non-Fungible Tokens (NFTs) into the gaming sector. As part of this strategy, the network provides developers with tools to mint one-of-a-kind NFTs that can be authenticated on the blockchain. The group also formed an alliance with Ludena Protocol, the publisher of the social gaming platform GameTalkTalk recently. The goal of the partnership is to boost NFT awareness in South Korea.

ENJ stakers earn fees for helping to secure the network. These fees are derived from a percentage of the network fees, marketplace commissions, cross-chain bridging tolls, and smart contract fees. When you stake your ENJ you agree to leave it locked in network smart contract for a preset time. You receive rewards in the form of cryptocurrency for your participation These rewards are based on the number of tokens you stake.

How Does Enjin (ENJ) Work

Enjin combines a variety of protocols to create an inclusive system where gamers and developers can collaborate. The Enjin Network allows gamers to create forums, group chats, voice servers, recruitment apps, and virtual item stores. Notably, the market has responded in kind. Today, the Enjin network supports +20 million registered users across 250,000 gaming communities. As such, it’s one of the world’s largest social gaming platforms.

The Enjin Wallet is a core component of the network. Users can store their BTC, ETH, BNB, LTC, ENJ, ERC-20, ERC-721, and ERC-1155 tokens here. The developers created the Enjin Wallet to simplify crypto investor actions. It includes a Dapp Browser, access to QR code airdrops, and exchange protocols. Notably, the wallet is available as a free download for Apple or Google devices.

The Enjin Multiverse is a Proof-of-Stake (PoS) gaming network announced on August 26, 2018. The project is meant to bring more inter-game assets into the network. Notably, six game titles agreed to collaborate on the project as part of the launch strategy. The group will now develop and implement the first shared ERC-1155 blockchain assets into the network. There are now +35 projects participating in these efforts.

The Enjin marketplace enables users to collect, buy, sell, and trade their favorite in-game assets. The marketplace currently supports the Ethereum network including ERC-20 and ERC-1155 tokens. Users can explore and collect rare and valuable digital assets directly from their wallets using the Enjin Marketplace.

The Efinity NFT blockchain was developed to meet the needs of games, apps, enterprises, and creators. Specifically, it streamlines the creation, launch, integration, and staking of NFTs.

Another cool aspect of Enjin’s market strategy was the creation of the ERC-1155 token standard. This unique Ethereum token variant was developed by Enjin CTO, Witek Radomski. It’s unique in that it allows for an infinite number of both fungible and non-fungible tokens to be minted in a single deployed smart contract. As such, ERC-1155 is also referred to as the Multi Token Standard.

The ENJ is the governance and utility token of the Enjin network. The main purpose of this token is to back the value of Enjin-powered blockchain assets. The developers behind Enjin have set the total issuance at 1 billion ENJ. Enjin is an ERC-20 compatible token that currently has +12.8 million in locked assets. 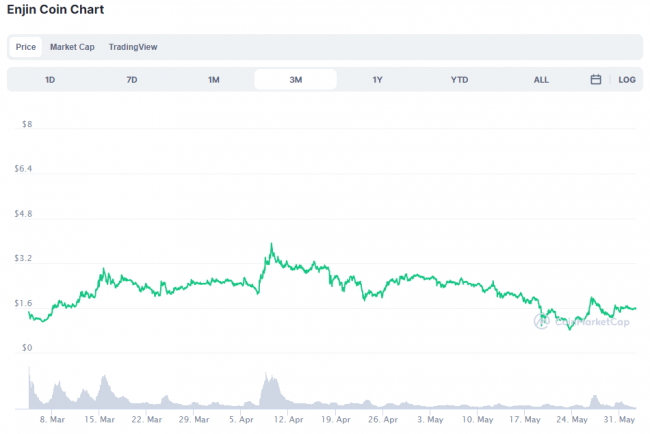 Enjin introduces a secondary token that is designed for transaction fees, liquidity, and yield farming through staking Enjin Coin (ENJ). This strategy enables EFI users to earn by staking ENJ on Efinity and minting tokens with ENJ.

Another unique feature of Enjin is the Paratoken protocol. This cross-chain token standard was designed to enable any fungible or non-fungible token, from any blockchain, to be moved onto the Efinity network. Once added to the network, these digital assets are compatible throughout the Polkadot ecosystem.

ENJ token holders can vote on changes to the network. Users can also submit their own recommendations to vote. These proposals can cover everything from simple fee changes, to major technical alterations. The community governance protocol also plays a role in determining what Enjin-based projects receive financial backing from the community.

Enjin founders Maxim Blagov and Witek Radomski recognized the growing demand and potential of blockchain gaming early. The project has been in the works since 2009. In 2017, the firm hosted an ICO that secured $18.9 million. This funding went to launching the first dedicated non-fungible token (NFT) blockchain on the Polkadot network.

Notably, the market was behind the project since day one. The first funding round saw participation from Crypto.com Capital, DFG Group, and Hashed, with support from Hypersphere, BlockTower, Blockchain.com Ventures, Fenbushi, Iconium, HashKey, Arrington XRP Capital, DeFi Alliance, and an extensive list of other leading firms, celebrities, and individuals.

This week, Enjin unveiled its Jump-net protocol. This system provides free NFT transactions to users. Anyone can now mint, send, and trade NFTs at no cost via the JumpNet protocol. According to developers, “The Enjin community has been experimenting with this next generation of NFTs for years.”

How to Buy Enjin (ENJ)

Enjin (ENJ) is available on the following exchanges:

Enjin – Blockchain Gaming is the Future

Enjin is perfectly positioned to capture the growing NFT momentum in the market. In-game blockchain assets provide an undeniable advantage to both gamers and developers. As such, Enjin is ahead of the curve in providing a way to streamline the integration of these assets. For these reasons, you can expect to hear a lot more from this project in the coming weeks and months.

How to Buy Enjin (ENJ) in Canada