Investing in Dogecoin (DOGE) - Everything You Need to Know - Securities.io

Dogecoin is a first-generation cryptocurrency that can be used to transfer value globally in a secure manner. Famously, Dogecoin features the Shiba Inu from popular internet memes. The decision to use this character was brought on by the developer’s desire to keep the project light-hearted. Like Bitcoin and Litecoin, the main purpose of this coin is to allow for peer-to-peer transactions to occur in a censorship-resistant manner. As of late, Dogecoin has seen considerable coverage in the media due to huge price hikes. As you are about to learn, this isn’t the first time this blockchain network has burst into the limelight.

What Problems Does Dogecoin Solve?

Like all first-generation cryptocurrencies, Dogecoin was basic in functionality. At that time, there weren’t any smart contracts, staking, or all of these other features that are now commonplace in the market. For these early coins, the primary focus was on creating a secure network. To that extent, Dogecoin succeeded greatly, but not without its share of trials and tribulations. 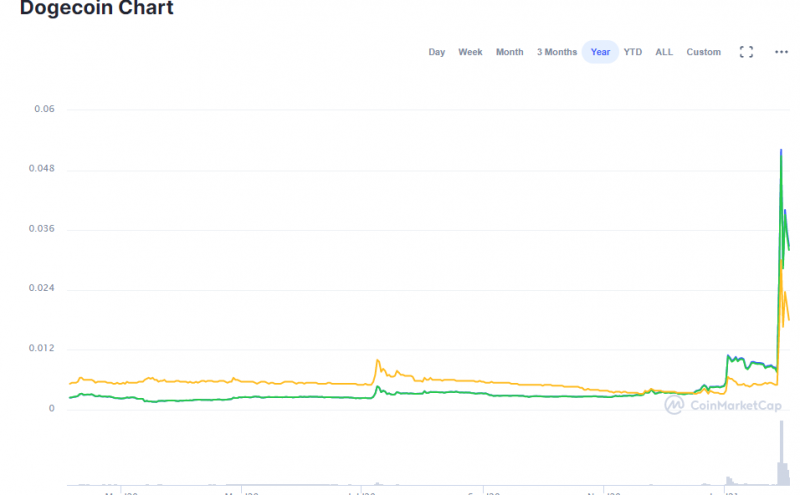 The second feature about Dogecoin, and perhaps what really makes this coin unique, is the spirit in which the developers wanted Dogecoin to express. Dogecoin wasn’t really made to free the masses from oppression like Bitcoin. Nor was it built to provide a viable alternative to Bitcoin in the market like Litecoin. Interestingly, this coin was built to spread goodwill and fun throughout the crypto community.

There are a lot of benefits that Dogecoin brings to the market. For one, you can use this coin just like Bitcoin to quickly and securely send value to anyone internationaly. Over the last few years, the coin’s network has increased, and now, more vendors than ever accept this unique token.

Dogecoin shares many technical characteristics with the world’s first crypto, Bitcoin. Consequently, the network is secure and provides real-time consensus. Like Bitcoin, hackers would need to control 51% of the network’s hashing power to alter the state of the blockchain. Considering the current Dogecoin hashrate is 203.97 TH/s, this is very unlikely.

How Does Dogecoin Work

It wouldn’t be too hard to argue that much of Dogecoin’s coding is a direct copy of Bitcoin. Discussing the idea, one of the coin’s founders, Billy Markus stated that it only took 3 hours to create Dogecoin. He described how he literally used the control F function to scroll through Bitcoin’s code and replace all instances of Bitcoin with Dogecoin.

He also made a couple of other adjustments to further the concept like changing the term mining to digging. Notably, Markus decided on a 1 minute block time. A blockchain network’s block time is a reference to how often a new “block” of transactions is added to the “chain” of transactions.

Dogecoin uses a Proof-of-Work consensus algorithm to keep the network secure. However, this PoW system is not the same SHA-256 version used by Bitcoin. Instead, the network relies on a scrypt technology in its PoW mechanism. This decision was made to prevent the use of high powered Bitcoin mining rigs. You can only mine Dogecoin using dedicated FPGA and ASIC devices

Dogecoin has no hard cap. Initially, the project began with 100 billion coins in circulation. Due to the 1 minute block times, by 2015, all of these coins had been mined. The developers decided to issue another 5 billion at that time. Notably, Dogecoin now has 5 billion coins scheduled for issuance every year. 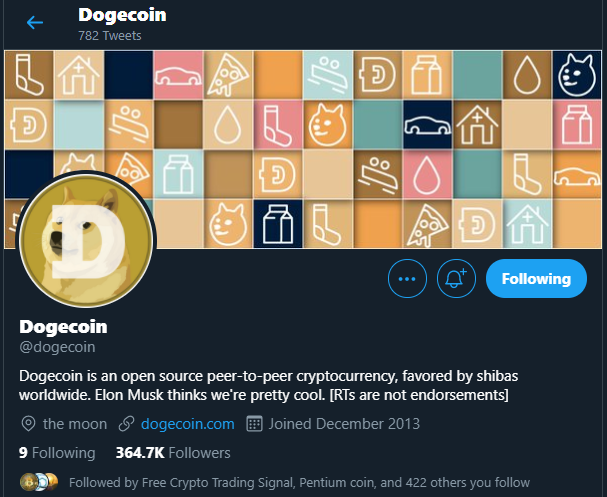 In the Dogecoin ecosystem, you have diggers. These network nodes are what validates new transactions and add blocks. Notably, mining Dogecoin is less competitive than Bitcoin. Notably, the developers behind this coin never did a pre-mine. Pre-mines are popular because they allow developers to build up reserves before the network goes public.

Dogecoin was founded by Billy Markus and Jackson Palmer. Both of these individuals had worked in the tech sector prior to Dogecoin. Markus was a software engineer at IBM and Palmer worked for Adobe as a programmer. Dogecoin started off as a joke geared for the market.

On December 6, 2013, the network went live. Originally, the project only garnered attention for a select Reddit community. These individuals would send tips in Dogecoin to each other. Notably, the Dogecoin website had a million+ visitors on the day of the launch of the coin.

On December 19, 2013, Dogecoin experienced a huge breakout moment. The coin’s value jumped almost 300% in value in fewer than 3 days. This market movement was the first time that Dogecoin really sparked market-wide investor interests. Notably, the rally was short-lived and within 3 days, the coin’s value had retraced 80%.

A few days later, the company’s native wallet, Dogewallet, was hacked. The infiltrator made off with millions of Dogecoin. A later review revealed that the attacker was able to modify the wallet’s send and receive page to send coins to a static address.

For many projects, this would have been the end. For Dogecoin it was an opportunity to show why this project is so different than many other coins. The developers and community quickly started the “SaveDogemas” donation campaign to replace the stolen coins. Miraculously, all losses were covered via this initiative.

In early 2014, the community sponsored a fundraising event that secured $25,000 for the Jamaican bobsled team. This event marked the start of an impressive donations rally. The community then focused on getting clean water in Kenya. After another successful event, Dogecoin went on to train assistance dogs for autistic children.

The same year, Dogecoin was listed on the exchange, Moolah. The listing gave Dogecoin more credibility and added to the liquidity of the network. Interestingly, the project was headed by a Reddit user by the name of Alex Green. He used the Reddit handle Moolah_.

In 2017, Dogecoin had another market surge to a new all-time high of $0.017/coin on January 7, 2018. This growth occurred during the crypto break out that saw all altcoins see considerable gains. In July 2020, another spike in the coin’s value occurred after TikTok users began a campaign to push the coin’s value higher.

This year saw Dogecoin raise eyebrows again. The token shot up over 800% in 24 hours as a result of a campaign to wreck predatory hedge funds. This rally was organized by a group of Reddit users, headed by an individual known as WSBChairman. The run took flight when the strategy got the nod of approval from the world’s richest man and founder of Tesla Motors, Elon Musk.

The group of Reddit users notices that certain hedge funds had begun naked short selling GameStop stocks. Shorting stocks is a term used when betting against the value of a stock. When you short a stock, you take out a loan in that stock, sell it, and then repurchase the same stocks at a lower price. You then repay the lender and keep the difference. 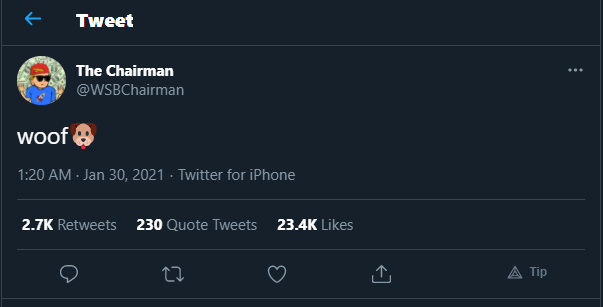 WSBChairman Continues to Support the Project via Social Media

This maneuver caused the hedge funds to lose billions. The losses were so great that many believed they reached out to the most popular trading platforms, such as the Robinhood trading app, and had them halt buying of these shares. The resulting decision dropped the price of GameStop stocks considerably. It also sparked both political and public backlash with a legal trial set to proceed in the coming weeks.

Recognizing that stocks could be halted much easier than cryptocurrencies, the same group of investors turned their focus on Dogecoin. The resulting campaign pushed Dogecoin back into center stage and to a new all-time high just shy of $0.08.

How to Buy Dogecoin (DOGE)

Dogecoin (DOGE) is available on the following exchanges:

How to Store Dogecoin (DOGE)

If you seek to make a major investment in DOGE or if you are planning on HODLing this crypto for long periods of time, a hardware wallet is the best option. Hardware wallets keep your crypto stored offline in “cold storage.” This strategy makes it impossible for online threats to access your holdings. The Ledger Nano S or the more advanced Ledger Nano X both support Dogecoin (DOGE).

Dogecoin has seen an incredible journey from starting out as a fun concept to donating $100,000 to charities, to becoming an integral player in the WSB Reddit drive. Only time will tell when the next Dogecoin breakout will occur, but if it’s anything like the last few, it will be a major event. From recent history this appears it could be triggered by a single Elon Musk tweet.

Related Topics:dogeDogecoininvesting in
Up Next

Dogecoin Vs. Bitcoin – What’s the Difference?