Investing In Cosmos (ATOM) - Everything You Need to Know - Securities.io

The blockchain network Cosmos (ATOM) seeks to transform competition into a community via its unique approach to the market. Unlike most projects in the space, Cosmos isn’t about beating the competition, taking the crown, or recognition. Instead, Cosmos seeks to help the entire blockchain sector advance via a combination of unique protocols that help bring the industry together.

Specifically, Cosmos is a network of blockchain networks. Developers call this concept an “Internet of Blockchains.” The goal of the project is to allow separate blockchains to communicate with each other in a seamless manner. By allowing any blockchain to communicate, share data, and transact with any other, Cosmos is able to transform friction in the market into a positive driving force for development.

Keenly, Cosmos is more than just a bridge between blockchains. This platform also features a full suite of products and features that make it an impressive option in the market. Cosmos introduces a next-generation technology stack that provides developers access to powerful tools that increase blockchain creation efficiency. 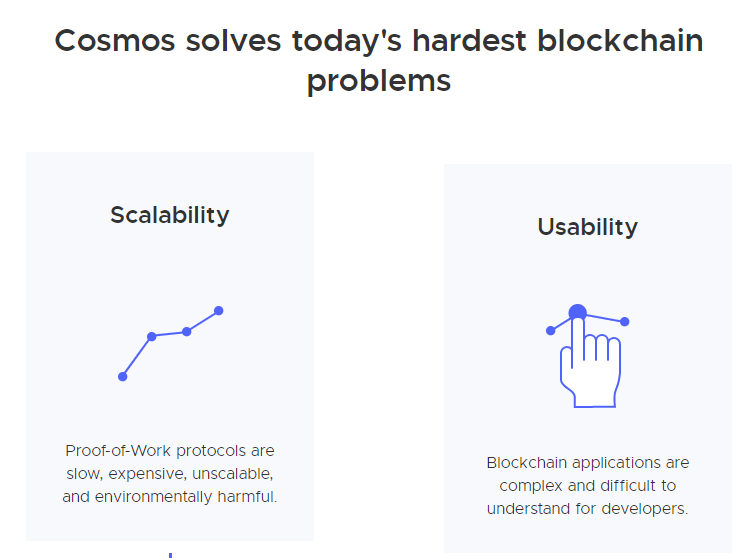 Impressively, developers are able to create complex blockchains within the Cosmos ecosystem in a week. In comparison, the same task would take weeks using 2cd-generation blockchains. For this reason, Cosmos continues to see a growing Dapp community that helps to drive more user interaction.

What Problems Does Cosmos (ATOM) Solve?

The main goal of Cosmos is to tackle the lack of interoperability in the market. Together, the blockchain sector encompasses a huge variety of services and functionalities. However, every blockchain operates as an island currently. This weakens the overall ability of the market to accomplish important tasks such as lobbying for more pro-crypto legislation, or other vital improvements to the industry.

Cosmos introduces a plethora of advantages to the market. For one, the platform is fully customizable. Developers can freely create and issue new blockchain applications and platforms with ease. Keenly, the Cosmos network functions without any central entity facilitating the activity.  In this manner, the network streamlines inter-blockchain transactions and provides developers the chance to share data and tokens programmatically.

How Does Cosmos (ATOM) Work

Cosmos utilizes various proprietary open-source tools to facilitate interoperability between the blockchains in its network. The protocol autonomously monitors the state of every blockchain in the network to accomplish this task. In the Cosmos ecosystem, each network is known as a zone.

Zones enjoy the full functionality of their network. Importantly, these blockchains are independent networks that can execute any transactions they require to complete their tasks. These blockchains can issue and distribute new tokens on their networks, approve new accounts, transactions, vote, and execute protocol upgrades without any effects from their Cosmos connectivity.

The Cosmos Hub is where all these blockchains meet. This protocol functions as an intermediary. Every zone in the network connects directly to the hub. The hub then maintains a constant record of the current state of the zone. Once a zone is connected to the Cosmos Hub, its interoperable with every other zone in the network. 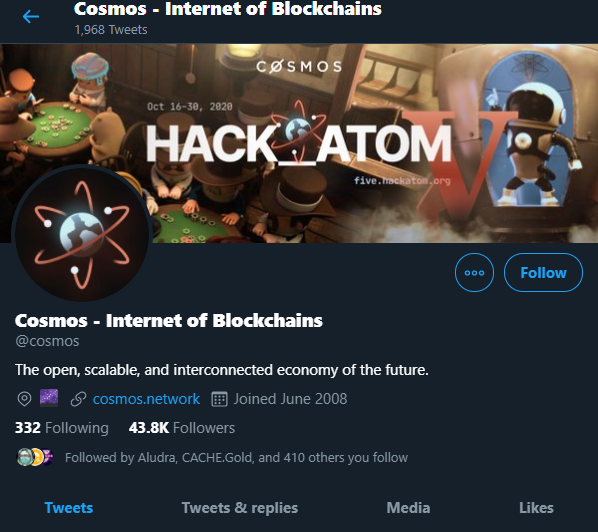 The Cosmos ecosystem relies on three layers to bring together the entire blockchain industry. The first layer is the Application layer. This is the layer that handles processing transactions. It is also the protocol responsible for keeping tabs on the network state. Networking is the second layer of the blockchain. This is the layer that allows separate blockchains to communicate. Different blockchains, with completely different technologies, consensus mechanisms, and purposes, can leverage each other’s services using this system.

The final layer is the Consensus Protocol. Cosmos utilizes the Tendermint BFT engine. This mechanism secures the network and allows nodes to maintain a current state. Specifically, the protocol is what validates transactions and adds blocks to the blockchain.

The Tendermint BFT engine is a proof-of-stake (PoS) governance mechanism. As such, network users act as validators. Users earn rewards when they stake their crypto on Cosmos. Staking is a term used to describe the process of locking up a certain amount of crypto in a network wallet in return for rewards. Staking is one of the hottest features in the market right now because of its low risk compared to trading. 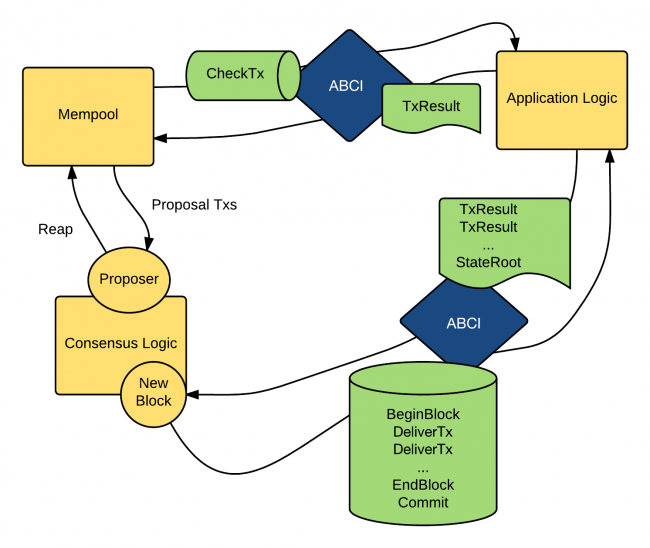 The Inter-Blockchain Communications protocol is the coding that allows the different zones within the ecosystem to communicate with the Cosmos Hub. This protocol ensures that all information travels freely and securely between interconnected zones.

Cosmos software development kit (SDK) allows developers to build blockchains without having to code them from scratch. Developers can use plug-ins and accomplish the core functionalities of their projects in days versus months. Think of it kind of like a website builder. You can pick from a variety of features such as staking, governance, and tokens details.

As a PoS network, users can earn a passive income staking their crypto. To be legible to become a node in the Cosmos network, you will need to remain in the top 100 stakers. This strategy is smart because it deters nefarious nodes as they would have the most to lose from any financial hits.

Nodes also gain voting capabilities. Your voting power is equivalent to the amount of ATOM you staked. Interestingly, you can also delegate your tokens to other validators. When you delegate your tokens, you still earn a portion of the block reward.

The history of Cosmos begins years before its launch date. The platform came about after the well-known blockchain developer Jae Kwon introduced Tendermint to the industry. This was back in 2014. Eventually, Kwon linked up with two other respected crypto developers, Zarko Milosevic and Ethan Buchman.

In April 2017, Cosmos successfully secured Cosmos via an ICO. Amazingly, it only took the platform 29-minutes to reach their goal. In December 2018, the network began major testing with the release of Game of Stakes. Less than four months later, the Cosmos official mainnet launched.

ATOM is the native cryptocurrency of the Cosmos network. It serves a couple of vital functions. For one, it is used to execute smart contracts and complete transactions. New ATOMs are generated as rewards for network validators every time a block of transactions receives approval. 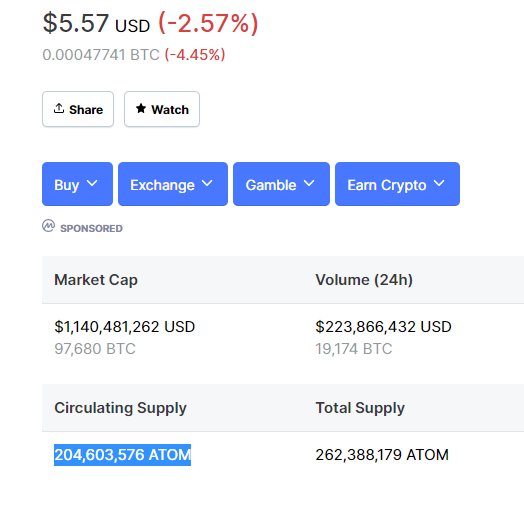 There are currently 204,603,576 ATOMs in circulation. Notably, most of these tokens came from the initial Cosmos mainnet launch. These early tokens saw distribution between initial donors, token sale participants, the Cosmos Foundation, and the core developers of the platform.

How to Buy Cosmos (ATOM)

Cosmos (ATOM) is currently available for purchase on the following exchanges.

Uphold – This is one of the top exchanges for United States & UK residents that offers a wide range of cryptocurrencies. They also offer Cosmos staking. Germany & Netherlands are prohibited.

How to Store Cosmos (ATOM)

Storing ATOM is easy. You can use a mobile or desktop wallet option such as the Atomic Wallet. This easy to navigate option allows you to access your ATOM when you need it.

If you seek to make a major investment in ATOM or if you are planning on HODLing this crypto for long periods of time, a hardware wallet is the best option. Hardware wallets keep your crypto stored offline in “cold storage.” This strategy makes it impossible for online threats to access your holdings. The Ledger Nano S or the more advanced Ledger Nano X both support Cosmos (ATOM).

The market needs Cosmos. In order to achieve the next plateau of mainstream adoption, the crypto industry needs to find some unification. Together, every party benefits greatly. As a community, users and developers flourish.

Additionally, this strategy allows blockchain firms to maintain control over the narrative of the industry. Long gone are the days of smearing cryptocurrencies as some form of funding only used by criminals. Today, cryptocurrencies provide the world with a more efficient alternative to the status quo. Cosmos does its part to ensure that the entire industry is able to leverage advancements in unison. For these reasons, Cosmos is already one of the most popular cryptocurrencies in the world.