Investing In Chainlink (LINK) - Everything You Need to Know - Securities.io

Connect with us
Chainlink 101:

Anyone who has watched the crypto charts as of late can speak on the popularity of Chainlink (LINK). This popularity stems from a variety of different sources including the firm’s unique business model. Unlike many of the other projects in the space at this time, Chainlink doesn’t seek to compete against other cryptocurrencies. Instead, the platform wants to advance the entire sector via its unique protocols.

What Problems Does Chainlink (LINK) Solve?

Chainlink attempts to rectify one of the biggest problems facing the blockchain sector, how to communicate information to and from the blockchain. Traditionally, this task is accomplished by sensors known as oracles. Oracles can be set up to monitor nearly anything. There are oracles that monitor the weather, sports scores, account balances, and the value of stocks, to name just a few.

Oracles expand the usability of blockchains because they provide a reliable way to initiate smart contracts when outside parameters are met. However, oracles are centralized. This centralization makes them the weakest spot in the blockchain. If an oracle becomes corrupted or is compromised, it puts the entire network at risk.

Data entry is one of the most important steps in blockchain creation. Remember, blockchains are immutable and censorship-resistant. If the information they receive is incorrect, it’s very difficult to erase and rectify this data. On some blockchains, it’s impossible. This issue is known in the development community as the “Oracle Problem.” Chainlink attempts to tackle these issues through the integration of various next-gen protocols.

How Does Chainlink (LINK) Work?

Chainlink seeks to create the world’s first blockchain oracle network. An oracle blockchain network would be able to leverage the same technologies found in traditional blockchains to ensure that the nodes in operations are functioning properly and their data is accurate.

In the Chainlink ecosystem, this process starts when a user puts out a request Requesting Contract for information. This notification will list as a blockchain event within the network. This listing will then create a Chainlink Service Level Agreement (SLA) Contract. This contract also launches three other contracts in the system.

The first contract verifies an oracle’s authenticity. This coding will review the history of every oracle. The system looks at the past contributions of this oracle and how accurate they were. At the end of the assessment, the oracle receives a rank. This rank helps the system to easily utilize the best oracles.

The second contract delivers the Requesting Contract to the Chainlink nodes. When the nodes receive this request, they will start to bid on it. The system automatically configures the number of nodes and the node type needed to complete the request using preprogrammed prerequisites.

The last contract reconciles incorrect data. The system will review all the data that has completed the previous checks and balances. Any data that doesn’t fall in line with the other network inputs are disregarded. Once this step is complete, the data is validated and available to the blockchain.

Chainlink brings some major benefits to the network. Oracles are important to network expansion. They are at the core of some of the most exciting developments in the sector. For example, DEXs (decentralized exchanges) utilize oracles to determine the price of cryptocurrencies without offering an order book.

Chainlink allows firms to continue to leverage this powerful technology in a trustless manner. Users can rest assured that the data they receive is not corrupt, incorrect, and timely. In the event of a single node failure, the system automatically replaces it with a higher ranking alternative.

Chainlink has been a project to watch for years. The program first entered the market in 2014 under the name SmartContract.com. Shortly after its launch, the name was changed to Chainlink to better represent the platform’s core market. Today, Chainlink helps to bridge the growing gap between external data sources and public blockchains in new and exciting ways.

In 2017, Chainlink hosted an ICO that was, at the time, one of the largest events to take place. The network has been in the spotlight ever since. In total, the crowdfunding event netting the platform a respectable sum of $32 million. This funding has helped Chainlink to push the boundaries of oracle reliability and security to new heights. 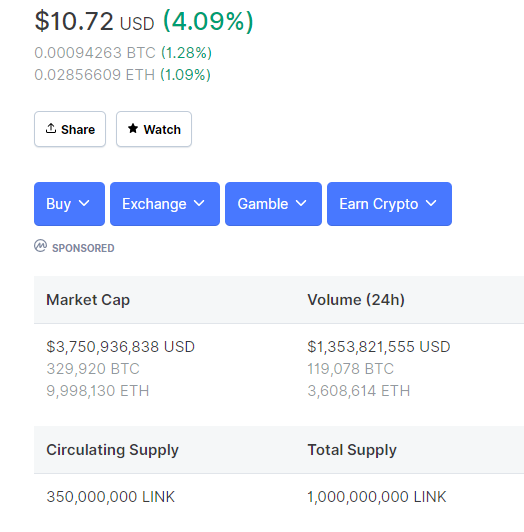 In 2019,  Chainlink made one of its most significant partnerships to date. The firm successfully lined up a strategic partnership with Google. The agreement secured Chainlink’s protocol within the Google smart contract strategy. This move was seen as a major win by investors as it allows users to connect to Google’s two most popular cloud services – BigQuery via API.

How to Buy Chainlink (LINK)

Chainlink (LINK) is currently available for purchase on the following exchanges.

How to Store Chainlink (LINK)

If you seek to make a major investment in LINK or if you are planning on HODLing this crypto for long periods of time, a hardware wallet is the best option. Hardware wallets keep your crypto stored offline in “cold storage.” This strategy makes it impossible for online threats to access your holdings. The Ledger Nano S or the more advanced Ledger Nano X both support Chainlink (LINK).

Chainlink – A Project Worthy of the Hype

No one can argue that the crypto space has a lot of projects that are all hype and no substance. Chainlink is not one of them. This platform provides a necessary resource to the market. Chainlink expands the functionality of the world’s blockchains and provides developers with a new level of flexibility. For these reasons and more, Chainlink continues to be one of the hottest coins in the market.