Investing In Cardano (ADA) - Everything You Need to Know - Securities.io

Cardano (ADA) is a third-generation public blockchain and Dapp development platform. The platform earned international media attention as the first blockchain to incorporate a peer-reviewed research strategy into its core principals.  Today, ADA is one of the top cryptocurrencies in the world.

Third-generation cryptocurrencies take the lessons learned from Bitcoin and Ethereum concepts and improve upon their shortcomings. Third generations cryptos such as ADA utilize new developments such as layered architecture to improve scalability, security, and sustainability. In this way, they create more usefulness, address flaws, and rectify inefficiencies.

Cardano differs from the competition in many ways. Unlike the competition, Cardano depends heavily on the academic sector. The platform’s design was built from the ground up utilizing evidence-based methods grounded in scientific philosophy, academic theory, and finalized via peer-reviewed research. 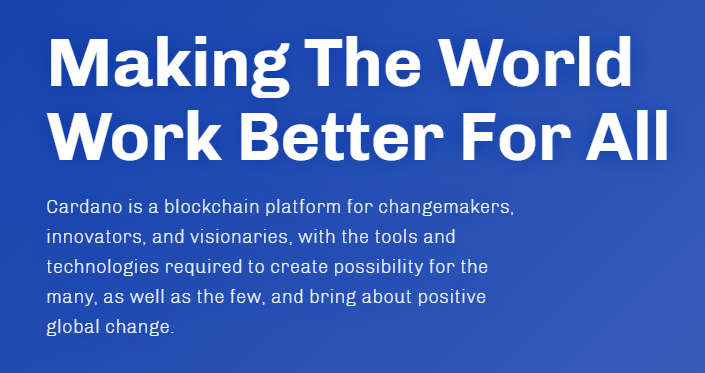 Interestingly, the name Cardano originates from the famous Italian polymath and physician, Girolamo Cardano. Cardano changed the world after he developed the first systematic computations of probabilities. His legacy lives on today.

Cardano’s developers have some hefty goals for the project. This advantageous team seeks to restore trust in global economic systems via the integration of Cardano technologies. Specifically, the platform introduces a more secure, transparent, and sustainable way to conduct business internationally.

Additionally, Cardano’s developers seek to provide the world’s unbanked population access to financial services. Sadly, estimates place the unbanked population at over 1.7 billion people currently. To this extent, Cardano has projects currently underway in Africa and other parts of the developing world.

The third goal for Cardano is to help stabilize the Dapp sector. The platform has a focus on security and sustainability specifically applied to decentralized applications, systems, and societies. Speaking on their goals, Cardano developers stated they intend to:

“provide a more balanced and sustainable ecosystem that better accounts for the needs of its users as well as other systems seeking integration.”

As a third-generation cryptocurrency, Cardano attempts to tackle some of the most common issues facing large scale blockchain adoption. These issues cover the gambit of blockchain including topics such as scalability, interoperability, and sustainability. Cardano seeks to reign these issues through the development of design principles and engineering best practices.

Today there are thousands of cryptocurrencies in the market, each with its own characteristics, benefits, and ecosystem. Cardano attempts to introduce standards into the market to enable interoperability across networks. These systems include blockchain governance models, system upgrade protocols, and feature sets.

Allowing blockchain interoperability introduces a new set of risks that developers must address. These security concerns are an area in which Cardano plans to reign in. Currently, the platform has standards for managing privacy, security, and decentralization.

Cardano introduced a new consensus mechanism known as Ouroboros. Ouroboros is a chain-based PoS protocol. It relies on randomly chosen leaders to approve blocks. Similar to most blockchains, the node that adds the next block receives a reward for their efforts.

At the start of each epoch period, the system selects leaders from the stakeholder pool. Epochs function as a snapshot of the blockchain from a previous date. Critically, Epochs must originate from a block sufficiently deep in the chain of transactions. Depth is necessary to ensure network security and avoid the possibility of chain alterations.

The technicalities of this system are impressive. Leaders get chosen based on the fixed stake distribution and a random seed. This seed utilizes a multi-party computation (MPC) between stakeholders in the previous epoch to generate randomly. Stakeholders can improve their chances of being selected based on the amount of ADA they stake. Consequently, Cardano introduces the first provably secure proof-of-stake protocol.

Cardano entered the market in September 2017. The project’s Founder’s Jeremy Wood and Charles Hoskinson both worked on the Ethereum project previously. However, the team split from Ethereum citing differences in goals.

Cardano garnered an immediate following in the crypto space due to its innovations in language and VM design. These additions were a direct response to issues encountered in the Ethereum network. The platform differentiated itself from the competition and began working with professors from universities around the world to incorporate peer-reviewed academic research into its design.

To raise funds an ICO was performe. The platform secured approximately $62 million from a global audience of investors. The funds went to the expansion of the ADA ecosystem.

On September 29, 2017, Cardano launched its first application on the mainnet. This marked the start of a successful journey for the team. The following year, Cardano secured multiple high-level partnerships across the academic and FinTech sectors.

In 2019, Huobi listed ADA. At one time Huobi was the largest exchange in China before moving due to regulatory pressure. Shortly after their addition, the world’s largest exchange, Binance added ADA to its platform. The addition helped drive ADA prices to new heights.

The ADA token gets its name from the 19th-century mathematician, Ada Lovelace. Lovelace was the world’s first computer programmer. Currently, there are 25,927,070,538 ADA in circulation. In total, Cardano will issue 45,000,000,000 ADA over its lifetime.

Cardano utilizes a decentralized team of developers. These developers work across three independent entities. Importantly, they utilize set standards to ensure interoperability within the ecosystem. Each team provides its own support to the project.

The Cardano Foundation is the non-profit entity behind the platform. This foundation protects the protocol technology and ensures its functionality. Additionally, they promote standardization in the sector to further interoperability.

Explore IOHK is a science and engineering firm that builds the technologies behind the network. They also design and maintain these protocols via a two-pronged approach. First, the group researches the foundations of cryptocurrencies to discover the core concerns. These issues include theoretical discussions regarding what’s the best consensus algorithms and privacy protocols.

Then, the engineering side of the team begins the process of development. To accomplish this task, the team incorporates formal methodologies in a unique manner. This strategy gives Cardano an extra layer of approval.

The final piece of the ADA puzzle is the Japanese incubator EMURGO. This team focuses on commercial ventures and how to advance the use of blockchain technology across industries.

The governance system used in Cardano is similar to Ethereum. The network relies on a decentralized autonomous organization (DAO) to approve new initiatives. DAOs are ideal for making decisions about the future of the cryptocurrencies because it helps prevent community splits.

Where to Buy Cardano (ADA)

Cardano (ADA) is currently available for purchase on the following exchanges.

Uphold – This is one of the top exchanges for United States & UK residents that offers a wide range of cryptocurrencies. They also offer Cardano staking. Germany & Netherlands are prohibited.

How to Store Cardano (ADA)

The three most popular ways to store your ADA are on a desktop wallet, mobile app, or a hardware wallet. Each of these strategies has its own characteristics. You may find that one doesn’t fit all your needs. In this case, use a combination of the three.

A mobile wallet is a great way for newcomers to enter the space. It’s free to download, easy to set up, and they are relatively secure. For this reason, new crypto investors should start here. More advanced users will prefer a desktop client due to the added security.

Anyone who seeks to make a large investment in ADA should consider purchasing a hardware wallet. Hardware wallets are more secure than mobile wallets because they keep your crypto safely stored offline in “cold storage.” The Ledger Nano S or the more advanced Ledger Nano X both support this Cardano (ADA).

Despite its heavy reliance on academics, there are still some in the industry that pointed out potential issues with the network. Specifically, Ethereum’s PoS researcher Vlad Zamfir argues that on-chain voting is dangerous.  He notes that the system forces rule changes on full nodes. This strategy removes an important check and balance provided by informed node operators.

Given its huge following and growing network, its safe to say that Cardano will remain a staple in the blockchain sector for years. Its unique approach and technical advancements are sure to remain a hot topic within the sector as development continues. For now, ADA remains in the top 15 cryptocurrencies in the world.

How to Buy Cardano (ADA) in India