Investing In Aragon (ANT) - Everything You Need to Know - Securities.io

Connect with us
Aragon 101:

Aragon (ANT) is an open-source, non-profit, blockchain protocol designed to simplify the creation and management of Dapps, blockchain protocols, and decentralized autonomous organizations (DAOs). The platform seeks to further corporate adoption of blockchain technology via its modular approach to common business functions. Notably, Aragon has seen great success since its launch. The platform has over 900 million in value stored across 15,000 DAOs. Best of all, the entire network is decentralized via a governance model that allows for the collective management of its functionalities and coding.

What Problems Does Aragon (ANT) Solve?

Aragon attempts to tackle one of the biggest roadblocks to corporates adoption, the lack of readily affordable blockchain professionals. Running a corporation involves a lot of overhead. Aragon wants to reduce these costs and improve all-around efficiency via its programmable DAOs.

Aragon provides companies with the fastest and easiest way to set up a DAO. The network functions similarly to a website builder in that it relies on already configured modules that can be customized to suit your company’s specific needs. In this way, Aragon provides a valuable service that enables any firm to leverage the power of blockchain technology without hiring an in-house professional. 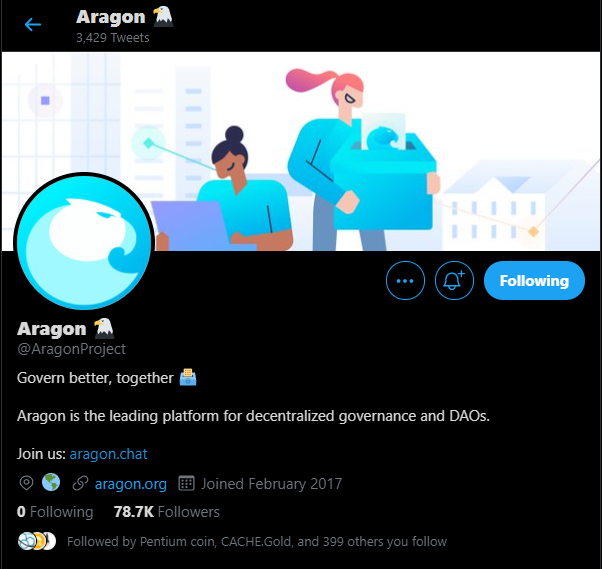 Programming a DAO is not a simple task, but Aragon makes it a possibility for those new to blockchain technology. The interactive interface eliminates the need for a company to hire blockchain experts because all of the most important features and functionalities come standard. Aragon (ANT) went to great lengths to ensure that all administrative functions that a modern company requires are part of the base module.

There are modules that cover actions such as shareholder voting, token sales, and accounts payable and receivable. Companies can also find modules that provide ownership, access control, and identity management. The completeness of the system is impressive as it extends to HR onboarding and payroll.

In addition to these base modules, companies can customize each feature to increase its effectiveness. These changes can be made via the interface, or, if the firm has the capabilities, changes can be made directly in the open-source code. In this way, Aragon can meet the needs of nearly every type of organization.

Another major advantage Aragon users enjoy is access to a global network of like-minded individuals. The platform encourages companies to collaborate with other firms from different regions across the world. These firms can bounce ideas off of each other and help streamline the on-boarding process for new users.

Aragon introduces a new concept called digital jurisdictions via the Aragon Court. This system is what enforces digital contracts between organizations. Developers introduced this protocol to ensure there was a mechanism to settle disputes that fall outside the preprogrammed modules.

Aragon users enjoy full transparency when using the network. They can easily monitor how all DAO funds are spent. In this way, all users can share the benefits of the network with confidence.

How Does Aragon (ANT) Work

Aragon combines a variety of new concepts and features to bring its goals to reality. All DAOs come pre-installed with the most critical corporate components. User can set up their business systems such as finance, token sales, and voting protocols.

The Aragon Client is where users create customizable DAO features. The client is designed to provide a transparent smart contract framework that is easy to navigate and requires no prior blockchain training.

The AragonOS is what users work with to set up their token sales. Here you can decide on all the most important details of your fundraising event. Features such as the time frame and how you intend to incentivize contributors are readily available to all.

The Aragon Network is the protocol that interactions between DAOs. This system allows multiple firms to conduct business in a decentralized and trustless manner on the Ethereum blockchain.

ANT is the native governance token for the ecosystem. This ERC-20 token grants users voting rights within the platform. The amount of sway you have will depend on how many ANT tokens you hold. ANT holders can vote on crucial updates to the network and other vital changes that are up for debate.

Aragon also introduces a special token to vote on digital jurisdiction matters. The ANJ token is a stakable asset that allows you to earn a passive income within the network. Staking protocols are more popular than ever because they provide more consistent returns than trading your tokens and they don’t require you to relinquish ownership of your tokens.

Aragon entered the market with a splash. The company’s ICO secured $24 million in just fifteen minutes. This event, held in May 2017, helped catapult the platform into stardom. Notably, Aragon was originally led by Luis Cuende. He is well known for his past work and was even featured in Forbes 30 under 30 list.

How to Buy Aragon (ANT)

Aragon (ANT) is available on the following exchanges:

The exchange offers trading access to over 190 countries including Australia, Canada, Europe, and is our most recommend exchange for USA residents. (Excluding New York & Washington state)

Binance – Best for Australia, Canada, Singapore, UK and most of the world. USA residents are prohibited from buying Aragon (ANT). Use Discount Code: EE59L0QP for 10% cashback off all trading fees.

How to Store Aragon (ANT)

If you seek to make a major investment in ANT or if you are planning on HODLing this crypto for long periods of time, a hardware wallet is the best option. Hardware wallets keep your crypto stored offline in “cold storage.” This strategy makes it impossible for online threats to access your holdings. The Ledger Nano S or the more advanced Ledger Nano X both support Aragon (ANT).

Aragon – Opening the Doors for Blockchain Adoption on a Corporate Level

Aragon’s approach to blockchain adoption continues to be highly effective. The network’s expansion is proof that there is a growing demand for DAOs in the market. For these reasons, Aragon now serves a vital role in bridging the gap between traditional organizations and decentralized ones.

Related Topics:ANTAragoninvesting in
Up Next