The crypto market is full of exciting investments that offer you a chance to participate in the decentralized economy. As you journey deeper down the rabbit hole, you are sure to encounter Ripple (XRP). Understanding the differences between Bitcoin vs Ripple (XRP) can help you to become a better investor, as both cryptocurrencies serve very different purposes and clientele.

Bitcoin, the world’s first cryptocurrency, was built to function as a “peer-to-peer electronic cash system” per Satoshi Nakamoto’s whitepaper. This coin was built to serve the needs of the people and provide a viable alternative to the centralized banking system.

In comparison, Ripple was designed to provide banks with decentralized financial services. The developers wanted to utilize a decentralized ledger to streamline payment settlement and asset exchanges for the traditional banking sector. While people often use the terms Ripple and XRP interchangeably, they are actually different as Ripple Labs is the company that developed the XRP cryptocurrency, its digital payment network, and protocol. The platform currently operates as a real-time gross settlement system, currency exchange, and remittance network. XRP facilitates these transactions.

Ripple Labs is a member of the RippleNet. RippleNet is a network of institutional payment providers located around the globe. This network has seen considerable expansion since its inception. By 2018, the network had secured over 100 banks. These banks seek to utilize Ripple to streamline their international money transfers.

Bitcoin has two main use cases. The first is as a form of digital currency. People can send Bitcoin globally. It’s borderless and immutable. There’s no central organization to block or charge back your transactions. The second use case for Bitcoin is as a store-of-value (SoV).  In its current state, Bitcoin is serving as an excellent SoV. The world’s first cryptocurrency is valued at over $50,000.

However, scalability issues have left Bitcoiners paying high fees to complete normal transactions. In this way, the coin is still seeking ways to fulfill its original purpose. Advancements, such as the off-chain protocol, the Lightning Network has helped Bitcoin better fill its role as such a system.

Ripple has three main use cases. Like Bitcoin, Ripple is designed to function as a payment settlement system. Ripple achieves this functionality better than Bitcoin in terms of efficiency and speed. XRP transactions complete in under a minute. Additionally, they have very little cost.

In comparison, it can take 30 minutes to hours for a Bitcoin transaction to complete. The fees you pay for the transaction will be dependent on the level of congestion on the network. Bitcoin is designed to increase its fees as more network congestion occurs. This protocol was meant to eliminate spam but recently has resulted in record-high network fees.

As a second-generation cryptocurrency, Ripple has more technical functionality than Bitcoin. The network is designed to operate as a low commission currency exchange. The protocol allows users to facilitate quick conversions between different currencies. 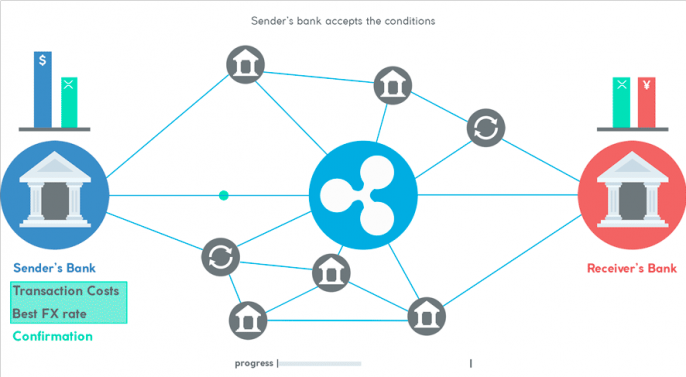 For example, a bank could send $1 million in USD to China without any conversion losses using the RippleNet and XRP as a medium. The USD would be converted to XRP first. Then, it would be sent to China where it could then be converted into yuan. The process is faster, more secure, and cheaper than the traditional monetary system.

Anyone familiar with Bitcoin knows the network requires an enormous amount of electricity to secure. Bitcoin’s energy consumption can be attributed to its Proof-of-Work consensus mechanism. Consensus mechanisms are how decentralized networks verify the state of the blockchain. In Bitcoin’s PoW protocol, network nodes (miners) compete against each other to correctly answer a complex mathematical equation.

The first miner to answer the problem correctly gets to add the next block of transactions to the blockchain. They receive a reward for their efforts. The reward is currently 6.5 Bitcoin. Notably, this is the only time that Bitcoins are ever minted. This process occurs roughly every ten minutes. In this way, Bitcoin has a highly predictive monetary issuance.

Ripple utilizes a distributed ledger technology, but it’s not blockchain. As such, it requires a different method to secure this network. The RPCA is a unique distributed consensus mechanism that provides Ripple with its fast transaction speeds. Instead of having all nodes approve transactions, only a select few handle this task within Ripple’s decentralized ledger.

Participating nodes verify the authenticity of a transaction by conducting a poll. Since fewer nodes are required to confirm transactions, they complete much faster. Ripple is known to complete almost instant confirmations. Transactions are not affected by their size or destination either. In this way, Ripple is far more scalable than Bitcoin currently.

XRP is pre-mined and uses a less complicated method of mining that isn’t available to all users. The developers intend to release 100,000,000,000 XRP manually over the life of the project. There are around 46 billion XRP in circulation at this time. XRP operates similarly to a bank in that it can issue tokens as it deems fit. In comparison, Bitcoin pursued a more democratic and decentralized approach to coin distribution. Bitcoin’s creator only pre-mined 1 million Bitcoin before opening the network to the public.

Since Ripple was built to service the banking community, it obviously has far more support in the sector than Bitcoin. The RippleNet brings their financial institutions together and allows them to save on their normal business practices. RippleNet has already conducted transactions on multiple banking networks. These establishments include some well-known institutions such as Santander, Axis, Bank, Yes Bank, Westpac, Union Credit, NBAD, and UBS.

Ripple has Bitcoin beat in many technical aspects. However, it lacks in other categories. For one, Ripple is highly centralized. The firm makes its development decisions at its sole discretion. Additionally, Ripple labs own 61% of the total XRP supply. The platform’s developers can decide when and how much to release.

Bitcoin introduces community governance in the form of miner consensus. The community debates when deciding on the future of the protocol. This approach provides regular users with more control over their investments. It also helps to prevent rug pulls.

Another concern Ripple investors must be aware of is censorship. Ripple is a privately-owned corporation. The firm has the capabilities to freeze, refund, or reject your transactions. In one instance, these powers were flexed on Jed McCaleb, the founder of Ripple Labs. In the occurrence, McCaleb had his sale of one million+ XRP reversed.

How Do Ripple and Bitcoin Work?

Both Bitcoin and Ripple operate distributed open-source protocols. Bitcoin leverages a blockchain to provide its services whereas, Ripple introduces a decentralized ledger that serves as an intermediate mechanism of exchange between two currencies or networks. Notably, Ripple was one of the first cryptocurrencies to enter the market without a Blockchain. The RippleNet is managed by a network of independent servers which compare their transaction records. 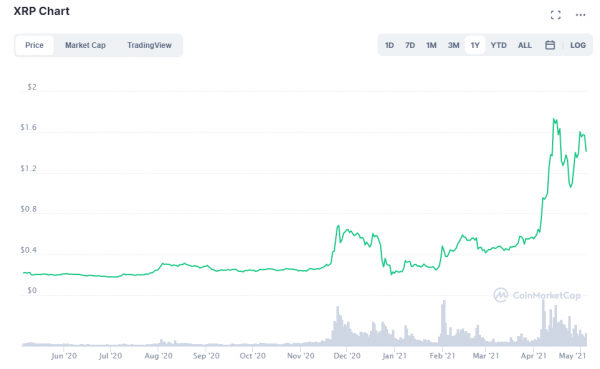 XRP officially launched in 2012. It functions as the main utility token for the Ripple Network. It was purpose-built to support tokens representing fiat currency, cryptocurrency, commodities, or other units of value. The developers choose to pre-mine 1 billion XRP. This decision was seen as controversial as it provided the developers with the majority of tokens in the market. They have gradually released thee funds into the market over time, but the majority still remains in the hands of early investors and developers.

Ripple is a privately owned company. The goal of the project is to secure a profit and expand its network. In comparison, Bitcoin is simply a decentralized protocol. There is no Bitcoin office or CEO to contact. In this way, Bitcoin is insulated better from regulatory pushback and scrutiny.

Ripple (XRP) is the brainchild of Jed McCaleb. McCaleb is best known as the founder of Mt.Gox. Notably, he had already sold his shares in the exchange prior to the now infamous hack. He also co-founded several crypto startups. These firms include Stellar, eDonkey, and Overnet.

McCaleb built Ripple with the help of Arthur Britto and David Schwartz. Originally, the firm launched with the goal to provide a peer-to-peer trust network. In 2012, the team partnered with another developer by the name of Fugger. At the time, he had a project called OpenCoin which would eventually roll into Ripple. Ripple remained OpenCoin until September 2013, when it rebranded back to its original title.

By December 2014, Ripple Labs had started to secure major partnerships in the market. The firm began working with global payments service Earthport to provide a streamlined payment service to users. The RippleNet has seen rapid expansion ever since.

Notably, in December 2020, Ripple Labs and two of its executives were sued by the U.S. Securities and Exchange Commission (SEC). The SEC alleged that Ripple had participated in the unregistered sale of unlicensed securities during its ICO. The trial is still ongoing in courts.

Both Ripple and Bitcoin offer high ROI potential. If you review past charts, it’s easy to see that Bitcoin has consistently outperformed XRP in terms of ROI. However, given the growing size of Ripple’s Network, there is still a possibility for major growth with this project in the coming months as well. To date, both coins are up considerably from their launch.

How to Buy Bitcoin (BTC) and Ripple (XRP)

Bitcoin Vs Ripple – Two Sides of the Coin

Now that you understand the key differences between Bitcoin vs Ripple, it’s easy to see why both of these projects can coexist in the market. Investors will find that Bitcoin offers an excellent SoV and Ripple is a project that has a strong following in the market. For these reasons, it’s not a bad decision to participate in both networks to some degree.

Related Topics:Bitcoin vs RippleJedMcCalebripplexrp
Up Next

Bitcoin Vs. Gold – What’s the Difference?

Top 5 Exchanges to Buy Bitcoin (BTC) in the Netherlands