As an educated crypto investor it’s crucial you understand the differences between Bitcoin vs Ethereum. Both of these coins are titans in the market, albeit for different reasons. Both coins are vital for the market’s development at this point. Here’s what makes these coins so different but, yet so important in the market.

Bitcoin was the world’s first successful cryptocurrency. Satoshi Nakamoto changed the world when he introduced his revolutionary protocol. His goal was to create a “peer-to-peer electronic cash system” that was both censorship-resistant and decentralized.

He succeeded in his mission when he launched Bitcoin officially in 2009. Since that time, Bitcoin has seen tremendous growth both financially and technologically. However, at its core, it still remains accessible to anyone. Bitcoin changed the world forever and inspired a new industry. For these reasons, you can consider Bitcoin the first generation of cryptocurrencies.

Notably, Bitcoin is not stagnant and the protocol continually develops. However, it was built to serve its particular purpose. Consequently, it’s not the best option for features such as smart contracts or other next-gen blockchain functionalities. Notably, the introduction of second layer protocols such as the Lightning Network expands Bitcoins functionality considerably.

Ethereum is a distributed, public blockchain. This decentralized network introduced the world to smart contract scripting functionality. These protocols allowed anyone to build decentralized applications and expand the use cases for cryptocurrencies. Today, there are thousands of different cryptos and blockchain projects. However, most utilize some forms of smart contracts to streamline network activities. 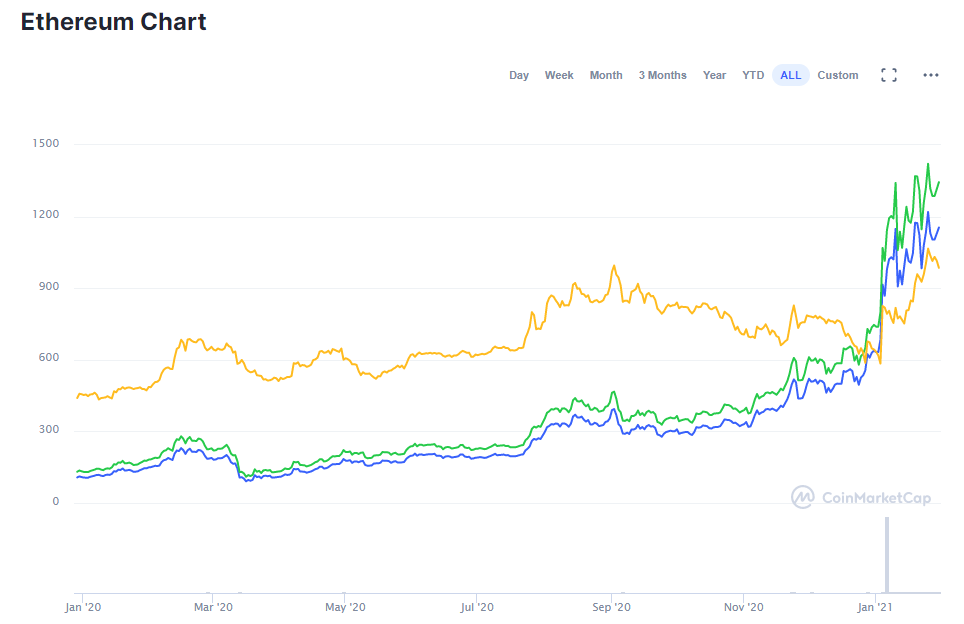 Not Exactly A Cryptocurrency

It’s important you understand that Ethereum isn’t a cryptocurrency. Ethereum is the platform that the cryptocurrency Ether functions within. This network functions as a programmable decentralized network for Dapp developers primarily. Additionally, Ether’s primary role is to compensate miners for performing EVM (Ethereum Virtual Machine) computations.

Dapps that run on blockchain networks are at the core of the blockchain revolution. In this way, Ethereum represented a fundamental shift in the development and functionality of cryptocurrencies moving forward. For these reasons, Ethereum is considered a second-generation cryptocurrency

To execute smart contracts, Ethereum introduces a unique protocol known as the EVM – the Ethereum Virtual Machine. Each full Ethereum node runs an instant of these virtual stacks. The main advantage of EVMs is that they improve on the process of building decentralized applications by improving the programmability and efficiency that the network executes contract byte code.

One of Bitcoin’s early followers was a computer developer by the name of Vitalik Buterin. In 2013, this advantageous individual decided to build a new cryptocurrency. This new project would share many technical characteristics with Bitcoin. For example, both coins utilize a Proof-of-Work (PoW) algorithm to validate the state of the network.

Bitcoin utilizes the SHA-256 algorithm. This mathematical equation requires miners to prove their work through advanced calculations. The network automatically adjusts its difficulty to ensure that blocks of transactions only get approved in ten-minute intervals. This approach ensures a predictive monetary issuance strategy until the last Bitcoin gets mined sometime in 2140.

Ethereum, like Bitcoin, currently uses a proof-of-work (PoW) consensus protocol. However, Ethereum uses the Ethash algorithm. Buterin decided on this mechanism to help reduce the advantage of specialized ASIC (Application Specific Integrated Circuit) mining rigs. ASIC mining rigs are built from the ground up to solve the SHA-256 algorithm Bitcoin uses. Critics of ASIC miners argue that these high-priced rigs cause centralization in the Bitcoin network.

When comparing the transaction thru put of the networks, Ethereum comes out far ahead of Bitcoin. Bitcoin approves blocks every 10 minutes. These blocks hold no more than 1MB of data. Consequently, Bitcoin is only capable of around 7 transactions per second. This low data rate was built into Bitcoin’s core coding to ensure that anyone could use the network.

Bitcoin caps its supply of 21,000,000 coins. This strategy ensures that Bitcoin retains scarcity in the market. Reversely, there is no cap on the amount of Ether (ETH). The network must continue to produce ETH indefinitely to cover gas fees created by developers executing EVMs. Currently, there are 114,467,625.91 ETH in circulation today.

Interestingly, Ethereum is set to do a major upgrade this year to Ethereum 2.0. This hard fork would place ETH on a new blockchain that runs on a Proof-of-Stake (PoS) algorithm. PoS networks remove miners and rely on coin holders staking their tokens to validate the network’s state.

PoS networks are far more energy-efficient and cheaper to maintain. They also provide faster transaction times compared to PoW networks. Best of all, there is no need to purchase expensive mining equipment because all you need is a network wallet to stake your coins on a PoS system.

The ETH ICO vs Bitcoin’s Launch

Bitcoin had a quiet launch that was celebrated by only a select few in the cypherpunk and development community taking any notice of this monumental invention. Interestingly, Bitcoin’s journey officially began with the genesis block. This the first block of Bitcoin’s blockchain. While no one knows for sure how many Bitcoin’s Nakamoto mined, estimates put his rewards at 1 million Bitcoin.

In comparison, Ethereum entered the market with much more fanfare. The Ethereum ICO (Initial Coin Offering) raised $18 million.  Ethereum continued this momentum into the launch of the first DAO (Decentralized Autonomous Organization). This event took place in April 2016. The launch of the DAO boosted Ethereum’s status and helped the network to secure $150 million in its public ICO. At the time, the DAO was the largest crowdfunding event to take place in the blockchain industry.

Now that you have a better understanding of the differences between Bitcoin vs Ethereum, it’s easy to see why both projects have longevity in the sector. As such, most crypto investors hold both of these coins in their portfolio.

How to Buy Bitcoin (BTC) and Ethereum (ETH)

Related Topics:bitcoin vsethereum
Up Next

How to Buy Bitcoin (BTC) in Singapore