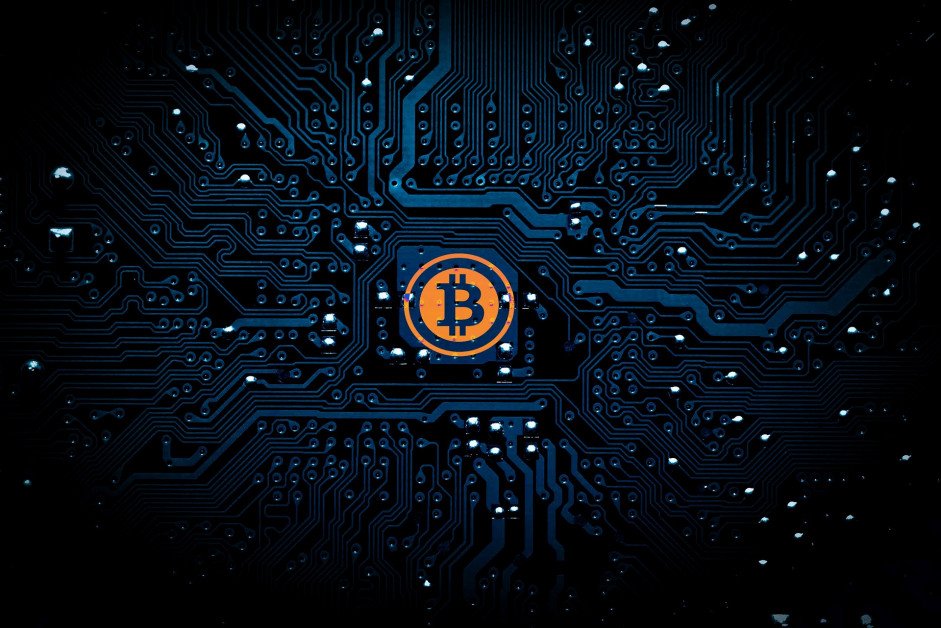 While digital assets got off to a rough start when calendars flipped to 2022, this past weekend may soon be looked at as the turning point at which traders ceased capitulating, and began to once again prioritize asset accumulation.  The reasons for these recent gains are varied, ranging from organic adoption/growth of digital assets, to Terra’s plans on purchasing $10 billion BTC as a reserve asset.  Another contributing area is an increasing crop of governments from various levels beginning to accept Bitcoin as a means of payment.

The following are a few examples of this aforementioned government adoption (ranging from City to State to Nationwide levels) dating from the present back to 2018.

Known for its scenic mountain-scapes of the Appalachians, the State of New Hampshire is home to the City of Portsmouth.  While it boasts a rich history involving shipbuilding and a strong naval presence, government officials in Portsmouth have decided to look to the future, having announced that the city will soon accept Bitcoin as a means of payment for bills.

This process, which is expected to be facilitated through the use of PayPal, will be undertaken with the goal of servicing the ‘under banked’, and to remove ‘friction’ from the existing system.

First reported in local news outlet, Seacoastonline, Portsmouth Mayor Deaglan McEachern was quoted as saying, ‘There’s waves of new things that are going to affect us in terms of our future that use the type of technology used in cryptocurrency…I want to make sure Portsmouth is not waiting around to see how this is going to affect us in the future, because it’s already affecting us.’

Travel west from the Appalachian mountains, and eventually another range will arise – the Rockies.  In early 2022, Governor Jared Polis announced that the mountain state of Colorado would soon support tax payments in Bitcoin for a variety of services, including but not limited to,

As indicated by Governor Jared Polis is his announcement tweet, the State intends on using a payment provider to facilitate such payments.  The goal of this is typically to circumvent the volatility associated with Bitcoin, as any payments made with Bitcoin will be immediately converted to USD, with the State never having held Bitcoin on its books. 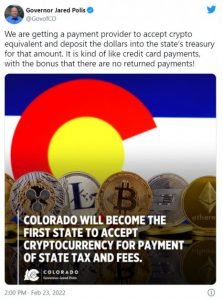 While there is no firm date for when such programs will launch, it is believed this will occur before the year is out, and as early as summer.

Over the past few months, Rio de Janeiro Mayor Eduardo Paes has worked diligently to see his goal of the city being a blockchain hub come to fruition.  Not only does the city plan on investing a portion of its treasury in Bitcoin, it has now been announced that residents will be able to pay for properties taxes with the digital asset as well.

Notably, Binance CEO Changpeng Zhao aka ‘CZ’, recently made waves when he tweeted that his own company would soon open an office in Rio de Janeiro as well, having met with the Mayor himself. 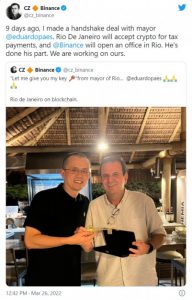 One of the earliest examples of Bitcoin adoption by a City came from Canada in mid-2019, when Innisfil announced that it would accept Bitcoin for property taxes.

At the time, Innisfil Mayor Lynn Dollin stated that the process – which is facilitated by popular Canadian exchange, Coinberry – was established to both serve its residents as well as invite innovation.

On its website, Innisfil boasts of its acceptance of cryptocurrencies, stating,  ‘Cryptocurrencies are growing in popularity with over 5% of Canadians currently owning some form of cryptocurrency.  Given that’s the case, it was important for us to be ready for the growing demand and to make sure we always have a variety of payment options available.  We are the first municipality in Canada and second in the world to accept cryptocurrency (e.g. bitcoin) as a method of payment for property taxes.’

Announced only weeks ago, Lugano, Switzerland, will make Bitcoin legal tender within its borders.  This means accepting the digital asset as payment for taxes, along with a various other implementations.

In a recent live chat involving representatives of both the City, Director Pietro Poretti and companies like Tether, it was stated that, ‘Lugano wants to be once again the home of a revolutionary innovation – namely the one started by Satoshi Nakamoto, with his famous and celebrated Bitcoin whitepaper.’

He continues, stating that Lugano is not intimidated by Bitcoin, believing that it should be ‘…disseminated and accessible to all…For us it is clear – Blockchain exists.  Bitcoin exists.  And it is here to stay.’

While this announcement was noteworthy on its own accord, various others were made, pointing to a bright future for Bitcoin in Lugano – namely its intent to establish curriculum’s alongside universities, which will result in the next generation of entrepreneurs well-versed in the technology.

While the aforementioned examples point to a bright future for Bitcoin, such moves are not always pulled off seamlessly – one example being the State of Ohio.

When announced in 2018 that Ohio would become the first state to accept Bitcoin for tax payments, enthusiasts rejoiced.  This was short-lived however, as merely a year later the program was suspended.  This is believed to have occurred not due a failure to perform on the part of Bitcoin, but due to the circumstances surrounding the programs creation, and persisting negative-perception among older politicians.

A Few of Many

The examples listed here today are simply but a few of many from around the world.  We could comment for days on the moves being made by El Salvador and like-minded nations.  If one thing is made clear from this growing list though, it is that BTC has the attention of not only the public, but lawmakers from around the world as well.  No doubt this is aiding in BTC’s current price revival, and the public’s perception of the world’s top cryptocurrency.

Malaysia will not Adopt Bitcoin as Legal Tender