Investing In NANO (XNO) - Everything You Need to Know - Securities.io

NANO (XNO) is a popular decentralized, open-source, blockchain, and cryptocurrency. The network was built to provide an eco-friendly and censorship-resistant alternative to the market. NANO features lightning-fast transactions and a community-driven consensus mechanism that provides users with an efficient and accessible peer-to-peer cash system.

What Problems Does NANO (XNO) Attempt to Fix?

NANO was built to address the inefficiencies present in the existing financial systems. The centralized financial system is skewed in favor of the banks and large investment firms. Sadly, regular users are seen more as pawns than part of the team in this equation. NANO rebalances this equation via its decentralized design that eliminates unnecessary middlemen and costs. 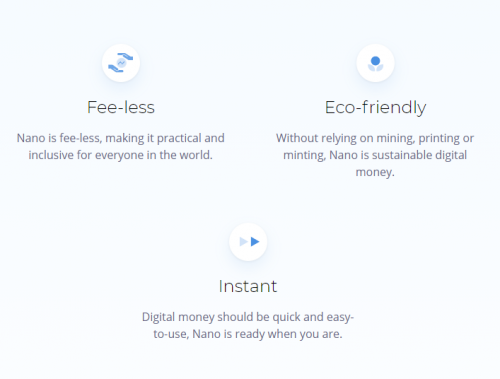 New investors in the blockchain economy can find it confusing at first. There are endless new terms, features, and services that are completely unique to the sector. NANO utilizes a streamlined design to provide a simplistic user experience. Anyone can navigate the protocol and send value globally in seconds using the network’s wallet. This approach helps to further blockchain adoption because it removes technical barriers for new users.

NANO is one of the most efficient blockchains in operation. The protocol provides a variety of benefits to users that can’t be overlooked. Here are some of the biggest reasons why users switch to this network.

NANO utilizes a unique fee-less business model. Users pay zero transaction fees regardless of the size and frequency of their transactions. To accomplish this task, the network spreads its costs across the hardware and bandwidth providers of the network. This strategy is important because it makes the fee structure a function of the network hardware instead of a rate schedule determined by any organization. As such, improvements in the pricing of hardware and bandwidth increase network capacity and lower the overall operating cost.

NANO is an eco-friendly blockchain. Every aspect of the network was built with sustainability in mind. As such, the system leverages a staking mechanism to validate the state of the network rather than miners. Since stakers don’t need to compete against each other, it requires much less electricity to keep these platforms secure.

The NANO blockchain provides scalability comparable to top-performing payment processors such PayPal. On average, it takes only 3-seconds for a transaction to complete. This scalability translates into more responsive Dapps. 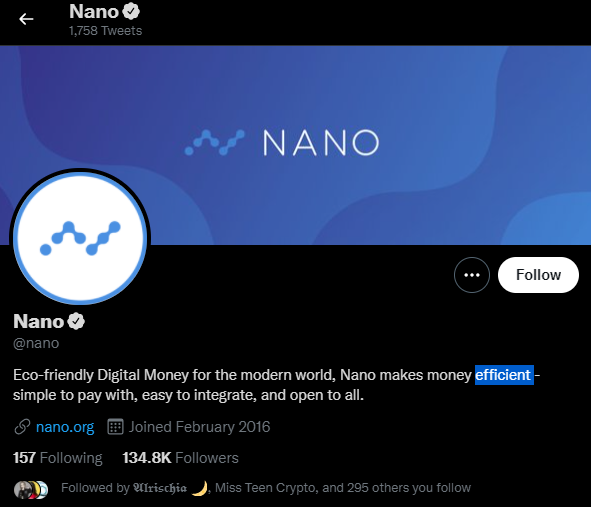 How Does NANO (XNO) Work

NANO can provide top-notch scalability with high efficiency due to its proprietary design. For example, it was the first cryptocurrency created on a directed acyclic graph (DAG). This design leverages a block-lattice data structure. As such, every account has its own blockchain known as an account chain rather than a single chain all nodes interact with. Crucially, Account Chains reduce clogging and bottlenecks.

The NANO blockchain is the core protocol of the platform. This network operates as an open-source code with no centralized governing system. As such, its censorship-resistant and completely open to the masses regardless of location or status. In this way, the protocol keeps in line with Bitcoin’s original goal to provide a viable alternative to the status quo.

NANO is a smart chain programmable blockchain that offers developers an extensive collection of resources to improve their products and simplify integrations. The developer tools section also demonstrates a variety of actions including how to set up and operate a node. Here, developers can streamline their processes and find out all the unique concepts that make NANO different than the competition.

NANO uses a consensus mechanism called Open Representative Voting (ORV). This delegated proof-of-stake (DPoS) variant incorporates voting nodes known as representatives rather than miners like Bitcoin. Representatives vote on the validity of individual blocks shared on the network. Importantly, representatives provide this service voluntarily. There and no rewards paid to users for voting. 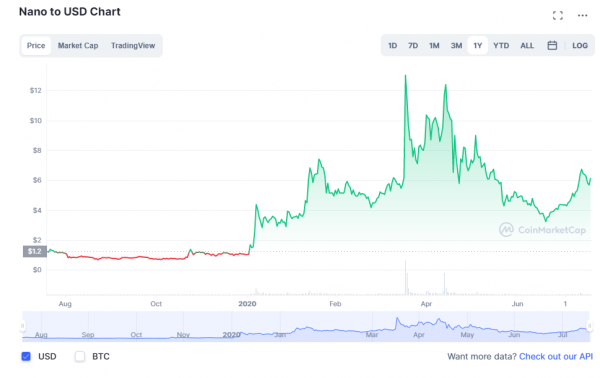 NANO is the main utility token of the ecosystem. Users can send this token anywhere in the world with zero fees. Additionally, users may delegate their NANO holdings to elected representatives to vote on their behalf via the community governance system. There is a maximum supply of 133,248,297 NANO slated for issuance throughout the life of the project.

The NANO Foundation is a non-profit group that was set up to help increase awareness. This group provides developers and promising projects with support such as guiding development efforts and funding network upgrades. Representatives use a voting mechanism to approve these upgrades and unlock the funds from the community vault.

NANO first entered the market as RaiBlocks (XRB) in 2015. The system was a pioneer in the market due to its fee-less structure and unique consensus mechanism. The token is the brainchild of a well-known software engineer named Colin LeMahieu. His motivation was to provide a fairer way for people to conduct transactions globally.

The developers decided against an ICO (initial coin offering) because they were worried that whale investors could hijack the platform and jeopardize its decentralization. As such, the coin was launched using a novel CAPTCHA faucet system. Users would complete a series of complex CAPTCHA and for their efforts, they were rewarded NANO. This approach provided a fair and democratic token distribution to the community.

How to Buy Nano (XNO)

Uphold Disclaimer: Assets available on Uphold are subject to region. All investments and trading are risky and may result in the loss of capital. Cryptoassets are largely unregulated and are therefore not subject to protection“.

NANO operates as a highly secure network that provides developers and users with a scalable solution that surpasses Bitcoin in terms of technical capabilities. The network is community-driven by a will to provide fee-less transactions to the world. As such, NANO has a strong community of followers that raise awareness for the project. You can expect to see more NANO news as its Dapp ecosystem expands.