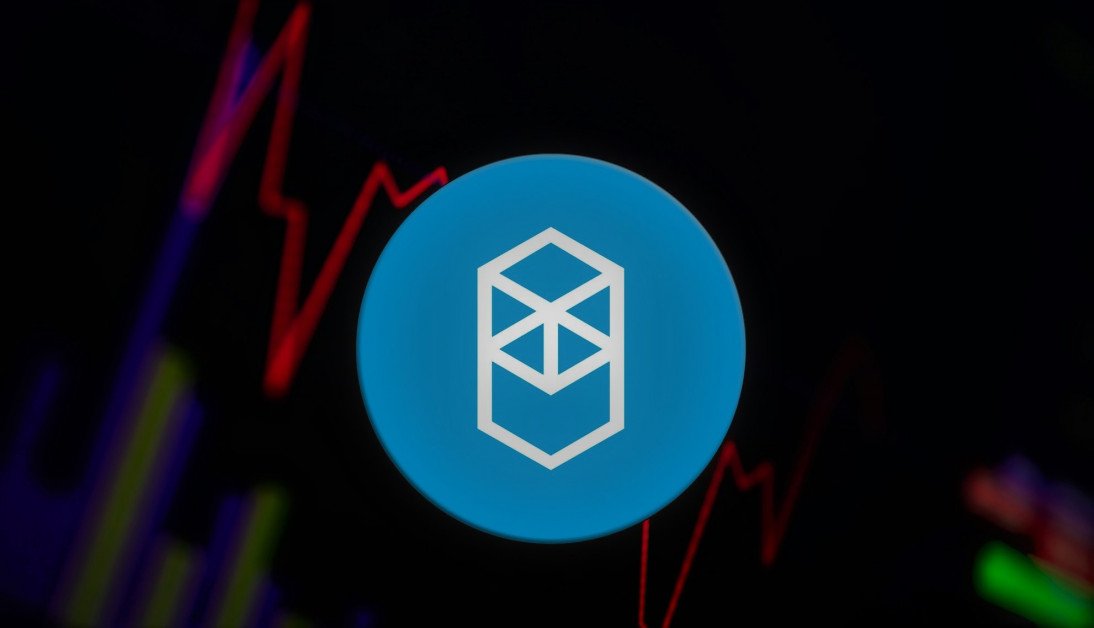 Bitcoin successfully reclaimed the $23Kprice mark ahead of Monday’s close on a mild upthrust that manifested in the evening against lingering market concerns and unrelieved layoffs. The market leader has, however, surrendered part of these gains in recent hours.

Crypto exchange Gemini, which has conflicted with the bankrupt crypto lending firm Genesis Global Capital due to a debt of around $900 million owed to Earn account holders, announced another round of job cuts affecting 10% of its staff. The exchange slashed its employee size by 10% in June last year and enforced another trim in July, slimming the total headcount to around 700 from 1,100 at the start of the year. In a message that circulated internally, Gemini co-founder and exec Cameron Winklevoss chalked up the decision to “persistent negative macroeconomic conditions and unprecedented fraud perpetuated by bad actors in our industry,”  the latter likely about its dispute with Genesis.

Bitcoin regains dominance over alts as profit-taking comes into play

In the market, Bullish traders retook $23,000 as spot activity in the form of increased buying pressure laid the foundation to reoccupy the higher grounds. The late Monday price boost brought Bitcoin’s cumulative two-week gains to roughly 30% by the end of the day – a welcomed recovery, especially among miners. The broader market has embraced mild correction in today’s action, with Bitcoins surrendering a few hundred. Still, the price remains above $22,500 and in reach of its just relinquished gains. On-chain data shows that miners have enjoyed some relief on this price recovery and are willing to hold onto their bags in anticipation of further upside.

Blockchain analytics platform Glassnode recently observed that selling activity among miners has tapered off, reflected in the amount of BTC transferred from miner addresses to wallets owned by exchanges which is currently a three-year low. Historically, a declining trend in miner sales figures is considered bullish as it implies a lack of incentive to sell until the realization of higher prices.

An accumulation trend has also been observed among large wallet sizes (>$1M), which raked up more assets between November and December. These ‘whale’ investors took up the bulk of supply dumped by exiting market participants in the aftermath of the crumble of the FTX exchange. In recent days, other groups have joined the trend, evidenced by the increase in supply held by the number of wallets with $1,000 and $10,000.

“Analysis of cohort behavior shows that short-term holders and miners have been motivated by the opportunity to liquidate a portion of their holdings. On the contrary, the supply held by long-term holders continues to grow, which can be argued to be a signal of strength and conviction across this cohort,” Glassnode analysts theorized in a recent post.

The bullish projection is separately backed by signaling activity in options markets and renewed premium in Bitcoin CME Futures – the latter an indication that institutional participants have taken a break in betting shorts. There, however, loom immediate concerns that some traders could settle for minor profit-taking should Bitcoin price exhibit weakness around its current price and threaten more losses.

“The sustainability of the current rally can be considered a balance between inflowing and newly deployed demand, meeting the supply drawn out of investor wallets by these higher prices,” the analysts concluded.

The BTC/USD, 1D candle chart shows that Bitcoin made its largest daily leap on Friday, printing a green candle of almost 9%, adding to the previous day’s slightly encouraging returns. 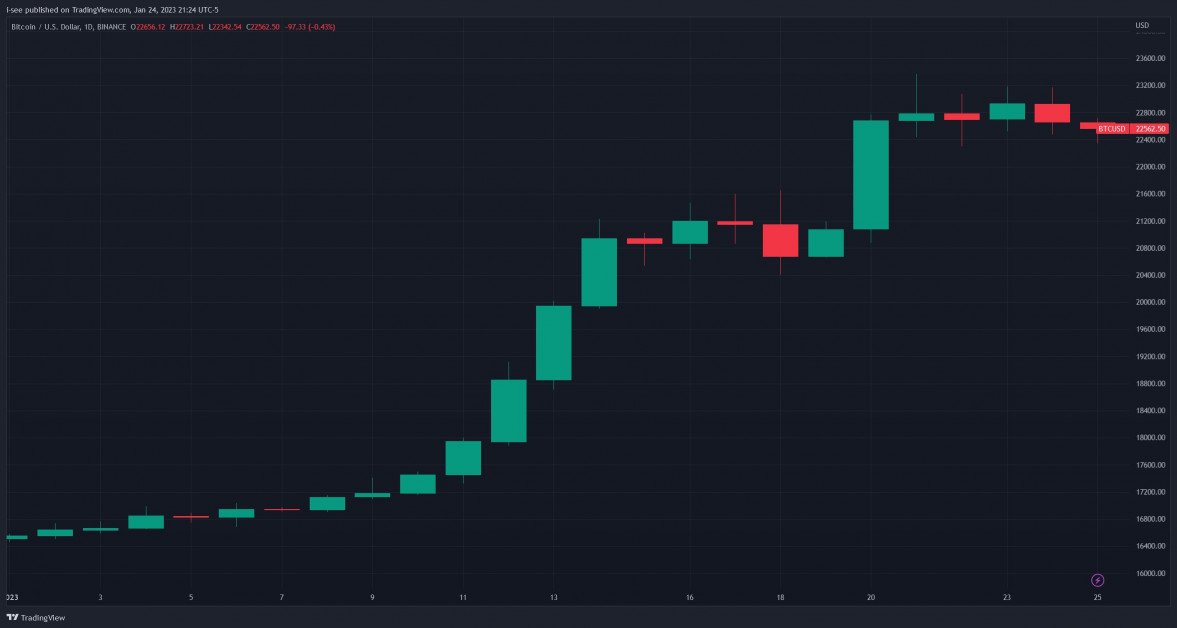 Bitcoin’s revival action in 2023 has helped pull more stake from market participants relative to other alts. Its dominance, by market capital, is currently around a six-month high of 44.70%. 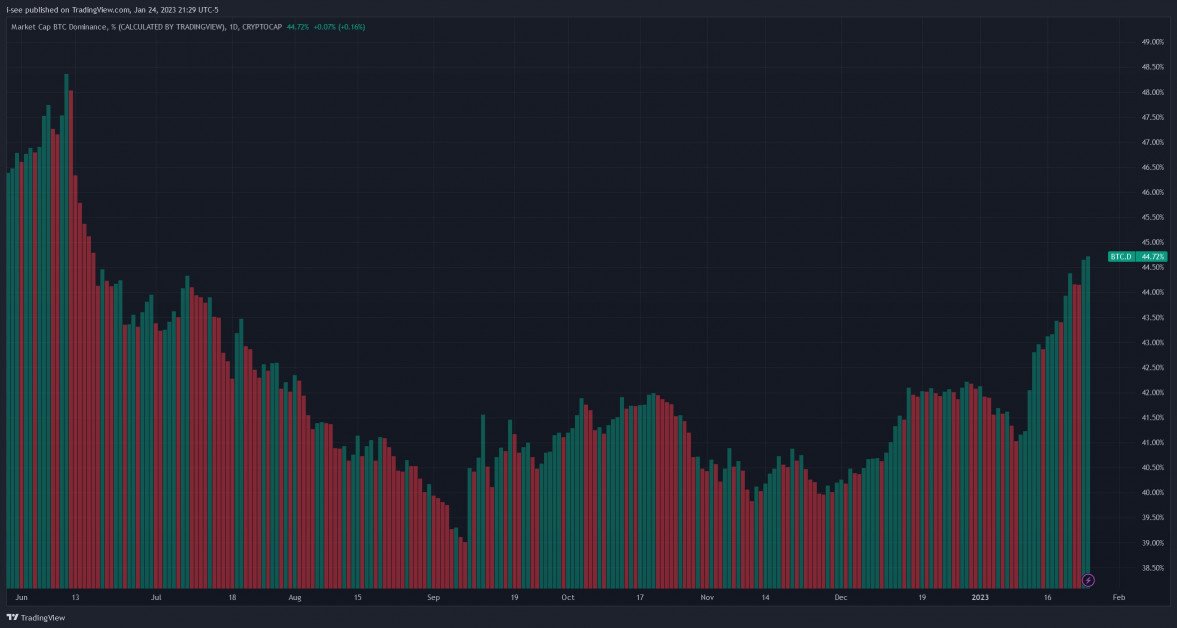 In the rest of the market, Ethereum (ETH) and most altcoins have trailed Bitcoin price movement – adding and shedding by similar margins. Threshold (T) token is the day’s biggest gainer, trading 8% higher than Monday’s price.

To learn more about Bitcoin, check out our Investing in Bitcoin guide.

Aptos (APT), the native token of the Aptos mainnet, has also traced a decent recovery course in the market, adding 68% in five days as of Monday’s close. The APT/USD trading chart shows that the Layer 1 blockchain token price has shot up 260% year-to-date. This surge has been ascribed to a strong interest in NFT and DeFi markets on Aptos. Earlier this month, the PancakeSwap community held and passed a vote to support the deployment of the decentralized exchange protocol on Aptos, advancing its goal to become a multichain ecosystem. The community vote outlined plans in line with the deployment that bode well for Aptos overall. 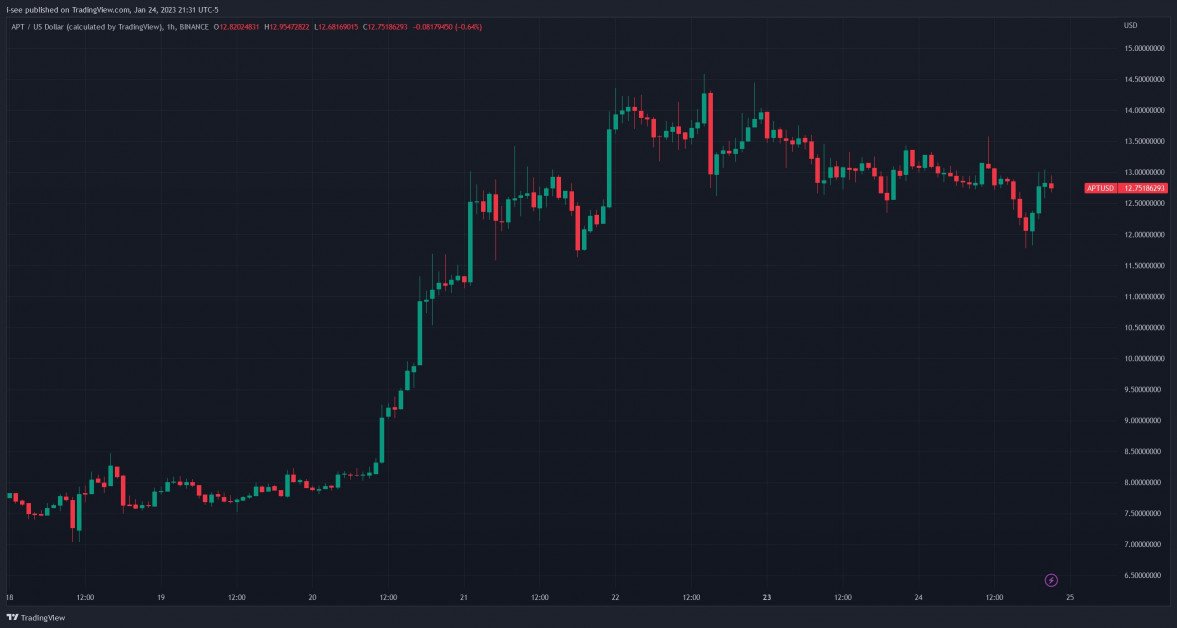 In the NFTs niche, the Aptomingos NFT collection, particularly, has drawn users to the Aptos NFT marketplace Topaz in recent days. The integration of the APT token Atomic Wallet earlier this month was another positive development around Aptos. The APT/USD pair was at press hovering around $14, shy multi-week high of $16 registered during Monday’s trading. Though APT has since retreated to $12.80, its price is 300% up from Dec 29 low. 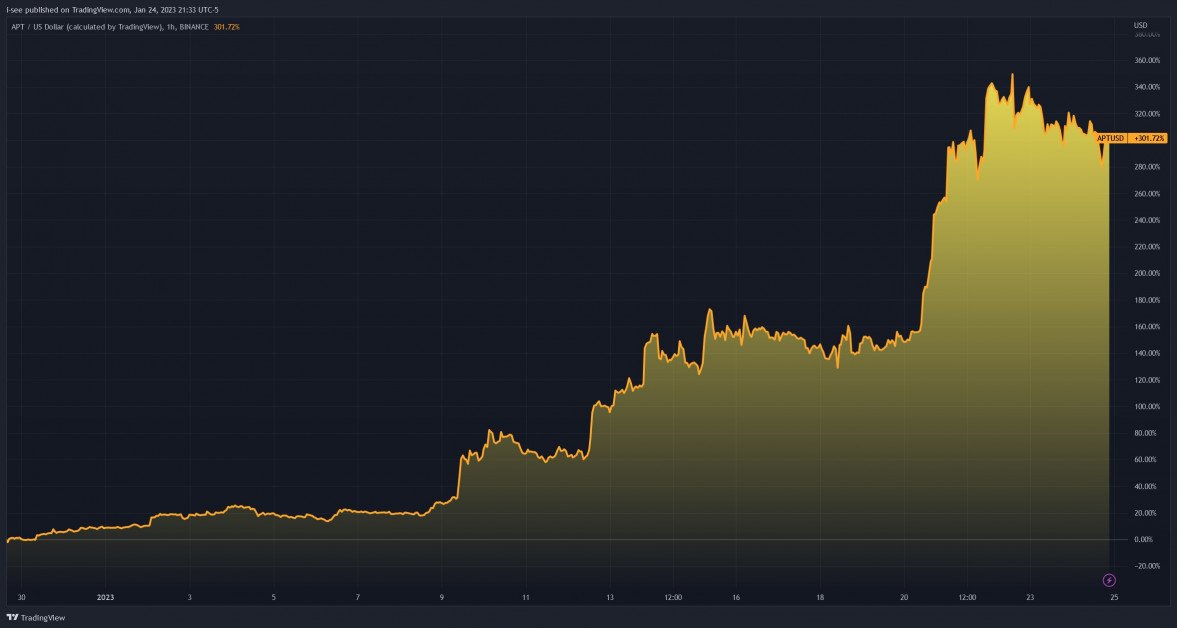 Aptos blockchain, a product of ex-Meta employees, secured $150 million from a series A round that saw participation from Jump Capital and a16z VC firms. The project was a subject of controversy at the time of its launch as observers questioned the distribution of the APT tokens, mainly the allocation of almost half the 1 billion issued tokens to investors and the Aptos Foundation. The distribution to this group was a cause for alarm because of the potential of a large liquidation or dumping of the tokens swaying the market. In justification, the Aptos CEO Mo Shaikh assured in an interview at the time that the project has lock-up periods to prevent such a scenario from playing out. 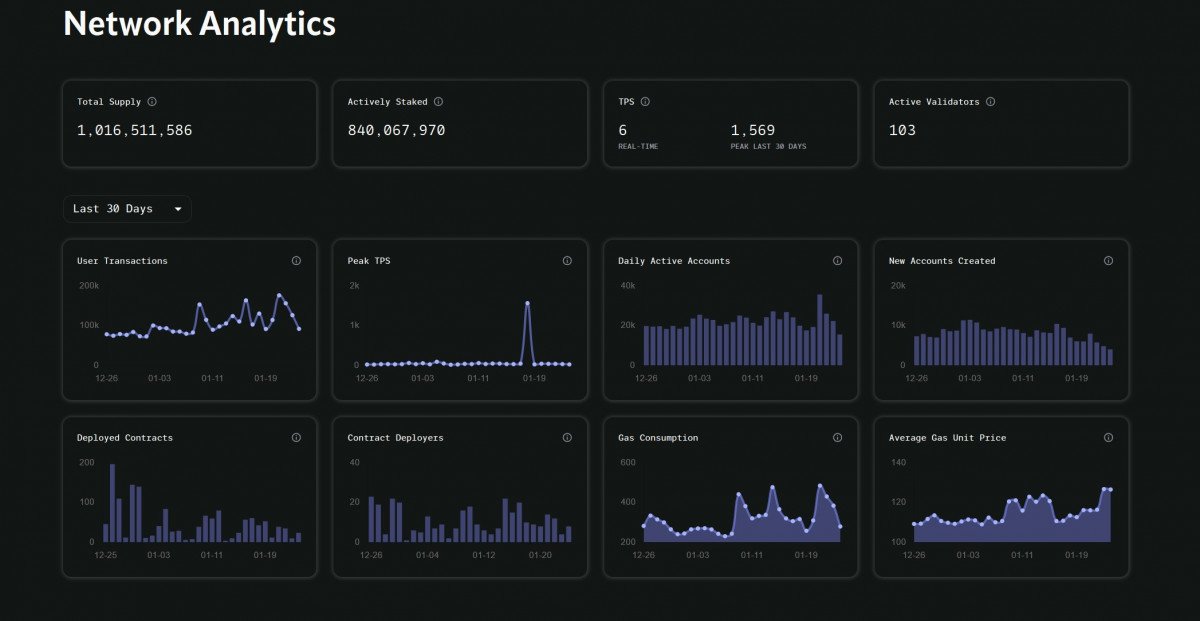 During development and prior to launch, Aptos was hailed as an even faster blockchain than Solana. On-chain data from Aptos’ block explorer, however, shows that the protocol has failed to live up to his expectations. The protocol was processing an average of six transactions every second (tps) at the time of snapshot. Worth noting, Aptos’ actively staked supply accounts for nearly 80% of the total supply.

To learn more about Aptos, check out our Investing in Aptos guide.

Play-to-earn project Axie Infinity is another that has made significant strides this year thanks to an impressive price recovery of its AXS governance token. Market data shows that thus far, in January, the token has gained 87% despite shedding more than 25% of its gains in the last two days. The AXS/USD pair rose sharply coming off the weekend to set a 15-week high of $13.83. 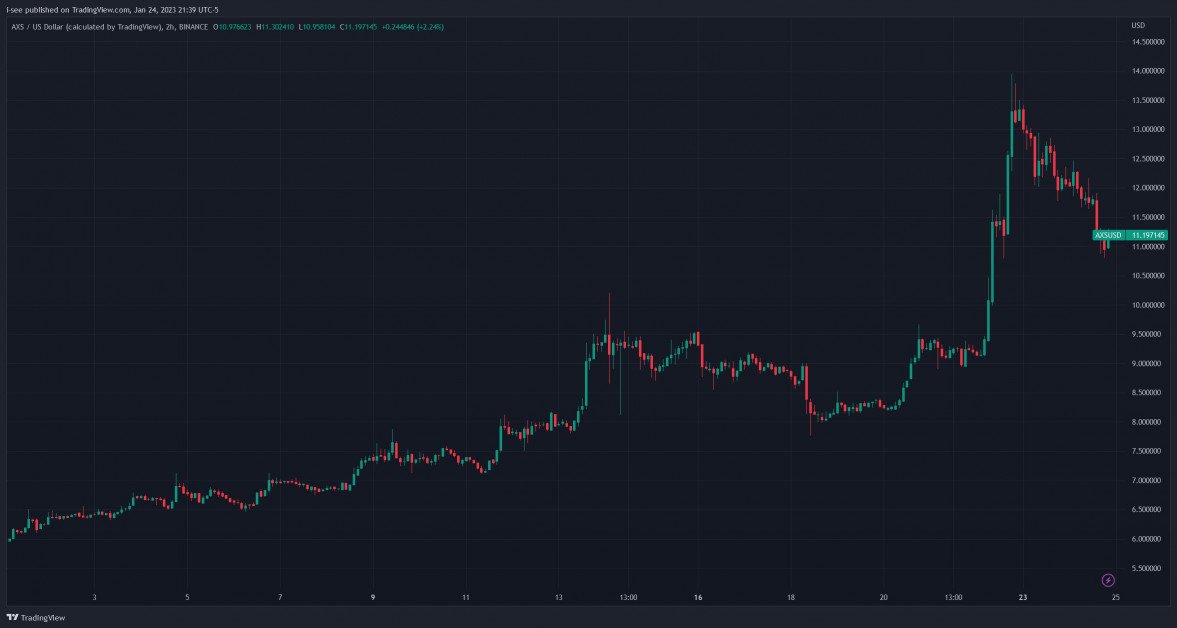 Markedly, the rally came hours before the unlocking of 4.8 million tokens, representing roughly 1.8% of the total supply of 270 million. The next unlock event will happen on Apr 17, adding a further 3,914,250.02 AXS (~1.45% of the total supply) to the current circulating supply, followed by a larger one in May as per the vesting schedule.

Despite recently topping its 200-day simple moving average for the first time in more than two years, the gaming project has struggled with user retention. In the last 30 days, the game has been played by an average of 432,001 live players – the lowest count for this metric in more than 25 months. In December, the play-to-earn game had an average of 468,805 live players, marking a third successive monthly decline. For context, the game tracked more than 2.5 million players consistently between December 2021 and April 2022. It is crucial, at least in theory, that Axie Infinity onboards more users ahead of the upcoming unlocking events to assuage fears of the dump triggering a sell-off.

Layer one blockchain Fantom on Friday launched a decentralized funding system called Ecosystem Vault after an initial vote was passed last July. The project aims to support developers building on the Fantom blockchain to create innovative decentralized applications (dApps) without relying on the middleman. The Vault would be financed by 10% of the transaction fees on the Fantom blockchain, achieved after slashing the burn rate of FTM. The community will have control over the fund, and according to the developers, this provides a chance for it to take collective action to shape the future of the network by taking part in reaching funding decisions.

Ecosystem vault will have some strict requirements before projects can receive funding. First, they would be required to create both a forum post and governance proposal, which must gain community approval with at least 55% of the vote, and at least 55% of FTM stakers must be in attendance. As the focus is on rewarding only the most promising projects, the Vault will initially be limited to funding just five projects at a time. Developers recommended that the community include vesting periods for payments as a means of ensuring ongoing engagement from project founders rather than risk them losing interest in the project upon receipt of lump-sum payments.

Fantom developers also said the automated crypto payments service LlamaPay would be used to distribute funds, cautioning that only the wallet addresses provided in the applications would be considered. The announcement highlighted potential risks such as the possibility of malicious approvals for projects requesting funds, and potential for self-funding or promotion of projects by influential entities, and projects that overpromise and subsequently fail to deliver on their objectives. 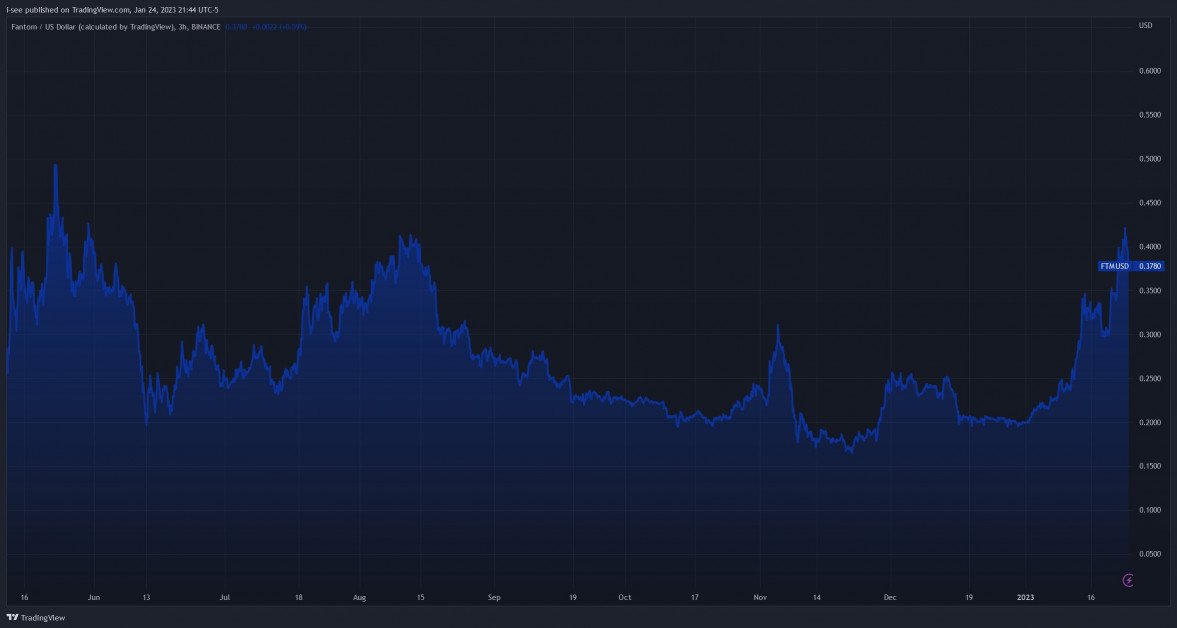 The price of the FTM token rose to a five-month high earlier this week, peaking at $0.4258 as per CoinMarketCap data. The Monday hike built upon a previous spike observed towards the end of the first half of January.

To learn more about Fantom, check out our Investing in Fantom guide.

In other developments, Flare Foundation, the nonprofit organization backing the Flare (FLR) ecosystem, last Friday released details of the first Flare Improvement Proposal, FIP.01, that seeks to ‘make fair’ the token FLR distribution and reduce FLR inflation. The proposed update specifically changes the schedule of FLR unlocks implemented in the initial airdrop when the Flare Network (FLR) went live in mainnet version earlier this month. Governance voting on the proposal started on Jan 21 (Saturday) and is expected to conclude on Friday.

To learn more about Flare, check out our Investing in Flare guide.