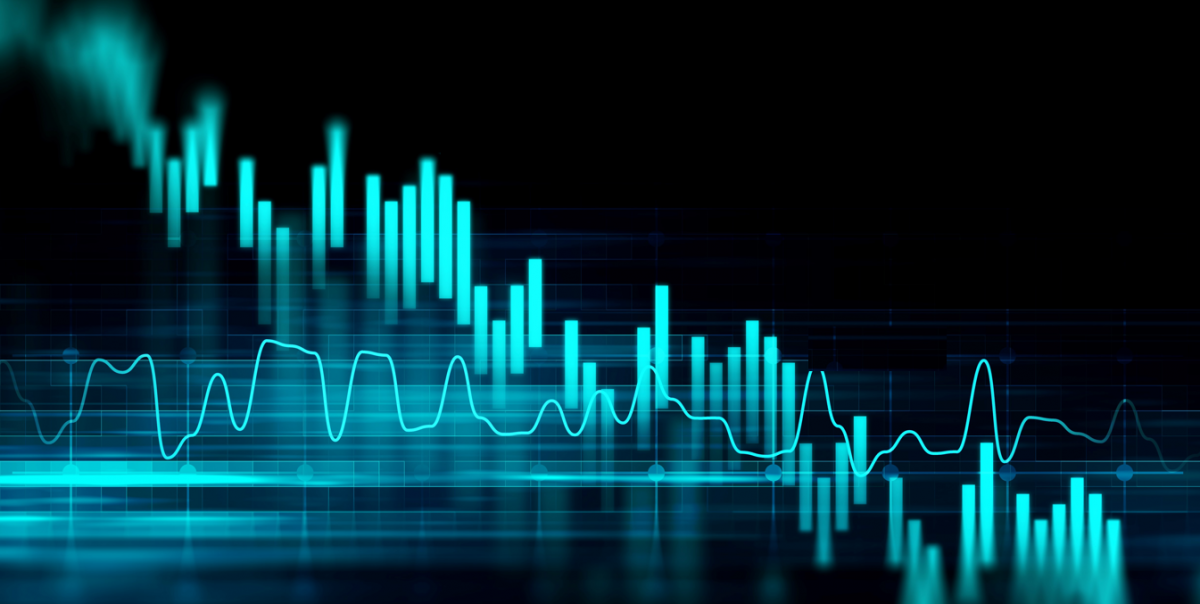 Tuesday has ushered in a sharp fall in the prices of almost all major cryptocurrencies, led by Bitcoin, which shed more than $1,000 in less than an hour to $19,650 before seeing a slight relief. The edging market uncertainty could see BTC price descend towards Oct. 25 lows as more volatility is expected ahead. Ethereum (ETH) has traced a similar path, falling steeply from a 24-hr. high of $1,604 to $1,485 with further losses on the cards for the premier altcoin. 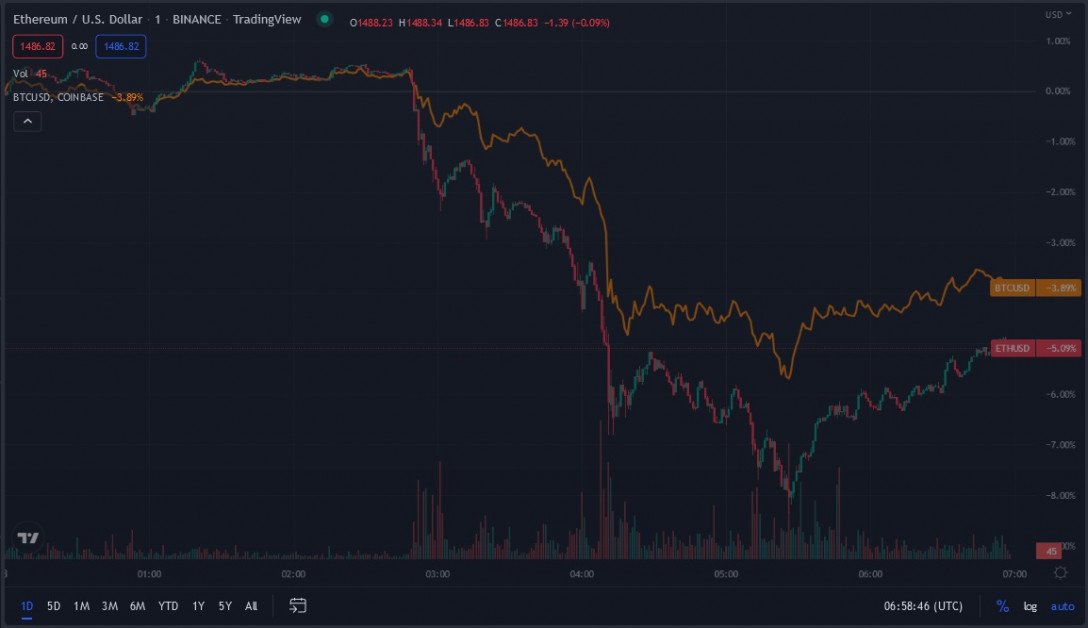 The rest of the market is also mostly in the red as investors take a defensive stance, fearful of the Binance-FTX drama escalating to affect the broader industry. The impact of the ongoing FTX token sell-off is already felt by trading firm Alameda Research while simultaneously weighing on the market.

The recent improvement in Polygon network metrics can be attributed to the spree of developments that Polygon has been part of during the bear market. In the quarterly report reviewing the network’s Q3 performance, Messari analysts highlighted initiatives towards ZK-scaling, network-wide activity swell, a fast pace of building, and a successful business development approach as positives.

In addition to Meta, the Polygon ecosystem has partnered with several major brands, especially in the second half of the year. Last week, giant multinational bank JPMorgan completed its first live trade on the Ethereum layer two scaler network. The DeFi transaction was executed under the Project Guardian initiative involving Singapore’s financial markets regulator, the Monetary Authority of Singapore. JP Morgans adds to global payments firms MasterCard as a major financial institution to leverage the Polygon network.

Polygon co-founder Sandeep Nailwal highlighted the two developments in a tweet, pledging to make the project the third biggest after Bitcoin and Ethereum. Polygon has a market capital of $9.53 billion, while Solana has an equivalent figure of $9.68 billion.

Polygon’s coin (MATIC) traced an impressive uptrend towards the end of last week, fueled by Thursday’s announcement from Meta. The social network giant introduced support for NFT minting and selling across its Instagram and Facebook platforms, unveiling Polygon as the first partner for the latest creator updates.

The news pushed the token price past the previously challenging psychological resistance at $1.00 on the same day before suffering exhaustion at $1.26 ahead of the weekend. The breach of $1.20 on Friday (Oct. 4) was the first successful since it fell below the mark at the end of April. While most cryptocurrencies came off the weekend relinquishing gains from Friday’s broader market relief rally, MATIC climbed to a new multi-month high on Monday. 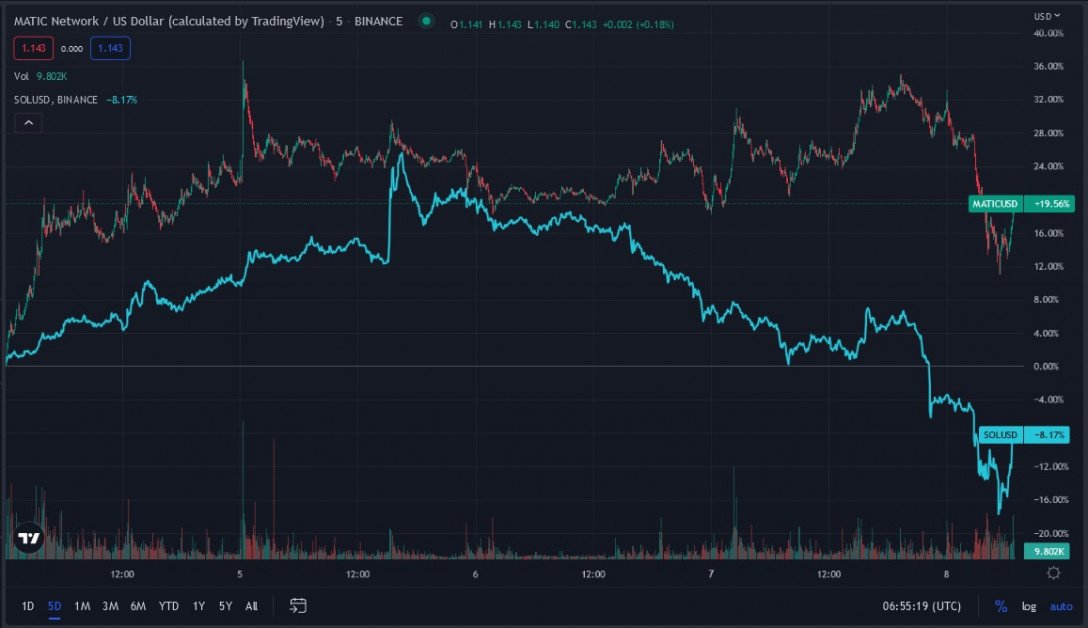 Though both altcoins have pulled back today, Solana’s losses have been relatively heavy, putting it at risk of being overtaken by Polygon. The latter managed to flip Solana during the morning trading hours in Asia before the MATIC token started moving in line with the rest of the market.

MATIC traders may find themselves trapped in a setup of building selling pressure if the token price fails to hang above its current range, $1.10. This is on account of the creeping downtrend in the market and a still healthy-looking 24-hr. trading volume. Most moving average (MA) technical indicators suggest that further upside is on the cards, but traders ought to take note of the huge bearish cloud covering the market.

Traders whose entry positions allow for quick profits are likely to make an exit before further correction, thereby increasing selling pressure. It is unlikely that MATIC price can hang above $1.00 through to the end of the week, having started descending in a reversal pattern. The overall domination of the crypto markets by bears also lines against momentum retention.

To learn more visit our Investing in Polygon guide.

Ethereum updates roadmap with a new MEV-centered stage – The Scourge

In a Nov. 5 Twitter post, Ethereum co-creator Vitalik Buterin shared the updated Ethereum technical roadmap, bearing changes that include plans to engineer the network as it evolves. The project chief developer indicated that following the consensus change, the next step for The Merge targets to achieve single-slot finality, which would, in effect, accommodate even more validators.

The improvements that will continue in the second stage, The Surge, are intended to tap on roll-ups to achieve enhanced transaction throughput. The goal is to break beyond 100,000 transactions per second (tps) compared to the currently unimpressive 10 – 20 tps. Generally, the objectives of this stage would evolve from basic roll-up scaling to full roll-up scaling, leveraging the power of optimistic roll-up fraud provers and zero-knowledge EVMs.

In the third and newly-introduced phase, The Scourge, the Ethereum network’s ambition would be to establish consistent and impartial inclusion of transactions. Another target would be to remedy the MEV issue – a problem that could potentially mean centralization concerns, in addition to network congestion and sky-high fees stemming from network exploitation using bots.

Next up would be The Verge, which in addition to just Verkle trees, would aim to improve block verification on the Ethereum network significantly. It would be tied to the implementation of Succinct Non-Interactive Argument of Knowledge (SNARKs), such that after these cryptographic proofs are satisfied, the verification of blocks boils down to just a few computations. SNARKs themselves would enhance user anonymity while still retaining the traceability of transactions.

Verkle trees’ proof-size efficiency will come in handy to maintain the network’s stability. Ethereum runs the risk of growing ad infinitum as its users and the resources it needs to sustain itself keep rising by the day. The Purge phase, which compels clients to remove historical data, helps make the protocol much simpler. This, however, necessitates the creation of systems to archive the data. The remaining technical debt is also paid off here to lower the cost of interacting with the network. Finally, The Splurge would be a fix-all stage scheduled to implement further EVM improvements and account abstraction.

The introduced changes aim to achieve more precise benchmarks at each step, such as better-defined roles for the likes of quantum-proof as a crucial element of the ‘endgame’ protocol.