Investing in the Mirror Protocol (MIR) - Everything You Need to Know - Securities.io

Connect with us
Mirror Protocol 101:

What is Mirror Protocol (MIR)?

The Mirror Protocol (MIR) is a unique project that enables the creation of Synthetics to gain on-chain price exposure to real-world assets. Through the use of advanced smart contracts, the platform allows anyone to issue and trade synthetic assets that monitor and track the price of arbitrary real-world assets. Impressively, this is all accomplished without requiring physical backing. The Mirror Protocol accomplishes this task via collateralized smart contracts that remain stabilized algorithmically on the blockchain.

To understand Mirror Protocol’s objective, you first need to grasp the differences between asset-backed and synthetic tokens. While they both are price-pegged to another asset such as gold, they achieve their value in very different ways. For example, Synthetic tokens provide exposure to the physical or abstract good that they represent without needing the asset directly. Synthetics achieve their backing via smart contracts that hold a variety of assets. These contracts automatically track and rebalance to remain stable to their peg.

This approach is in stark contrast to asset-backed tokens that require a custodian to hold the asset directly. In most instances, there are additional costs associated with storing and securing these assets. Additionally, regular audits must be conducted, which also adds to the fees of such a project.

There are many problems that the developers behind the Mirror Protocol have set out to fix. Primarily, the goal of the project is to speed up the integration of traditional assets entering the blockchain sector. By providing exposure to these assets via Synthetics, anyone can participate in the market.

Currently, there are millions of people around the world who can’t access valuable financial resources due to their location, status, or other restrictive measures. Traditional financial assets such as stocks, bonds, and derivatives are very difficult to invest in for populations outside of America and Europe. Additionally, there are a lot of extra costs associated with these investments that add to the difficulties experienced by many investors. The Mirror Protocol introduces a more inclusive alternative to the market.

The high transaction costs and liquidity constraints of traditional markets have made them nearly off-limits for the average person. However, the tokenization of assets allows for some exciting new benefits. For one, tokenization democratizes investing in large-ticket assets.

Tokenized assets can be divided into many smaller tokens. This division allows more people to invest by lowering the overall cost of participation. This strategy has been popular in the stock market for years in the form of fractional ownership. Unlike the stock market, the Mirror Protocol doesn’t eat up your profits via a myriad of third-party fees.

This strategy also helps provide more liquidity to markets. In the past, hard to transfer assets such as real estate, suffered from liquidity issues. These buyer restrictions limit investing opportunities significantly. Using blockchain tech to track and transfer ownership substantially reduces friction and drives new liquidity into the market.

Benefits of the Mirror Protocol (MIR)

The benefits of the Mirror Protocol make it ideal for use in today’s digital economy. The protocol enables users to tokenize anything and everything from traditional equities to real estate. In turn, these assets become globally accessible, transparent, and affordable to the masses. Additonaly, the network introduces a self-induced solvency feature to help ensure the platform remains profitable moving forward.

One of the biggest benefits of the Mirror Protocol is that it helps to drive blockchain adoption. The unique technical structure of the network reduces the financial and technical barriers limiting blockchain integration. Mirror provides users with the capability to create globally accessible, infinitely divisible, and affordable digital assets.

The Mirror Protocol is an open-source project that was designed to function on both the Terra and Ethereum blockchains. The network was vetted by the community and has had cyber audits conducted by CyberUnit. Also, the network regularly hosts open bug bounties where users can earn free crypto for discovering any potential weaknesses.

How Does the Mirror Protocol (MIR) Work?

The Mirror Protocol is able to produce Synthetics and tokenize nearly any asset. The developers choose to build the network on the Terra blockchain. Terra is a fourth-generation blockchain that supports stable payments and open financial infrastructures. Specifically, the Mirror Protocol utilizes the stablecoin, TerraUSD, as one of its primary collateral assets. TerraUSD is supported by a basket of seigniorage-style stablecoins pegged to various fiat currencies.

There are two types of participants in the Mirror Protocol ecosystem – Minters and Traders. Minters are the nodes that mint assets. Users are encouraged to mint assets via a fee structure that takes a small percentage from every transaction fee. Traders are the second part of the equation. Traders are users who buy and sell mAssets on the decentralized exchanges supported by Mirror.

The Mirror Web App is how users trade and mint Synthetics. The interface simplifies the process and makes it so no previous technical experience is required to create unique digital assets on the blockchain. This interface also plays a role in the community governance of the network.

Synthetics on the Mirror Protocol blockchain are referred to as mAssets. Synthetics can be created, stored, and traded directly from your network wallet. Notably, you will need to collateralize your synthetics prior to launch.

Creating a mAsset is simple when you leverage the Mirror Protocol. To create a mAsset, you will need to lock up 150% of the asset’s value in a network smart contract. This collateral can be posted in TerraUSD or other popular cryptocurrencies. Notably, your Synthetics are liquidated when they go above the collateralized threshold.

How Much is Collateral Worth

Since determining the value of your Synthetic is crucial to the collateralization process, great care has been taken to make this part of the system easy to navigate. Notably, in the Mirror Protocol, the value of your collateral is determined by decentralized price oracles.

This strategy relies on Band Protocol to provide access to a network of decentralized oracles. The firm’s low-latency oracles update every 15-seconds. They are continually updated via multiple premium data providers and any oracles that act maliciously or fail to uphold their responsibilities are removed from the network immediately. This strategy helps to reduce the attack surface of oracles, by removing the dependency on single-price feeds that can be easily manipulated. Impressively, Band Protocol is currently overseeing $66 million UST in locked assets on Mirror.

Mirror Protocol users can trade mAssets on the Terraswap exchange. This system allows users to swap their synthetics directly from their wallets. You can see all the relevant details of the tokens you are following. Notably, the system can complete trades in seconds thanks to its advanced technical features.

The Mirror Wallet is how users interact with the Mirror Protocol securely. This decentralized wallet was developed to streamline the use of cryptocurrencies and Synthetics. You can easily see your balances, past payment history, and more.

One of the best features about Mirror Protocol mAssets is that they are tradable on automated market makers (AMMs) on public blockchains like Terra and Ethereum. This interoperability improves the overall liquidity of the project by making it easy for issuers and investors to buy and sell mAssets globally.

A new addition to the Mirror Protocol’s arsenal, mETHs are synthetics built on the Ethereum blockchain. Providing users the ability to trade mAssets on Ethereum opens up the doors for increased adoption. Ethereum is by far the largest DeFi and Dapp ecosystem in the market. It was a wise move to cater to the network’s user base. 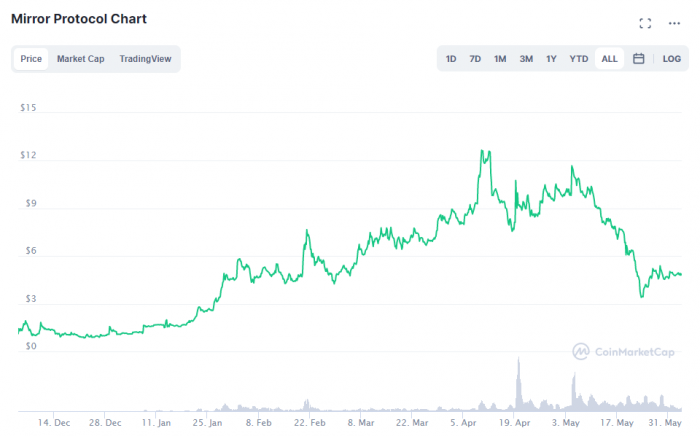 The Mirror Token (MIR) is the main governance and rewards token of the network. It’s used to incentive liquidity providers. MIR gets distributed via liquidity and platform incentives. Notably, the token was launched without a team or investor pre-mine. In this way, the network remains true to its democratic goals.

MIR token holders can vote and submit proposals on the direction of the network. To be eligible, users need to stake their MIR. The more you stake and the longer, the more weight your vote holds.

The Mirror Protocol launch in 2020. The goal of the project was to allow anyone to gain access and exposure to traditional financial assets and instruments using Terra’s blockchain. The platform was originally designed exclusively for Terra users. However, the developers decided to expand their services to the Ethereum ecosystem. This maneuver provided the network with deeper liquidity and better market penetration.

How to Buy Mirror Protocol (MIR)

Mirror Protocol is currently available for purchase on the following exchanges:

The Mirror Protocol – Blockchain Ingenuity at its Finest

You have to hand it to the developers behind the Mirror Protocol. This concept displays the advantages of blockchain technology in a spectacular fashion. The unmatched transparency and nearly infinite tokenization capabilities of the platform make it ideally suited for the digital economy. For these reasons, the Mirror Protocol remains a pioneering force in the market that continues to demonstrate excellent potential moving forward.