Investing In KardiaChain (KAI) - Everything You Need to Know - Securities.io

Connect with us
KardiaChain 101:

KardiaChain (KAI) is a cross-chain programmable blockchain infrastructure. The network was built to meet the growing demand for blockchain services from the enterprise and governmental sectors. Notably, the project has managed to secure a major following in Vietnam where it’s recognized as a top-performing decentralized network.

What Problems Does KardiaChain (KAI) Solve?

KardiaChain alleviates one of the biggest concerns facing the market at this time, network fragmentation. A lack of interoperability continues to slow adoption rates. Both developers and users suffer due to this issue. For example, developers spend countless hours creating the same systems when they would be better off leveraging existing solutions and focusing on the new aspects of their creations. 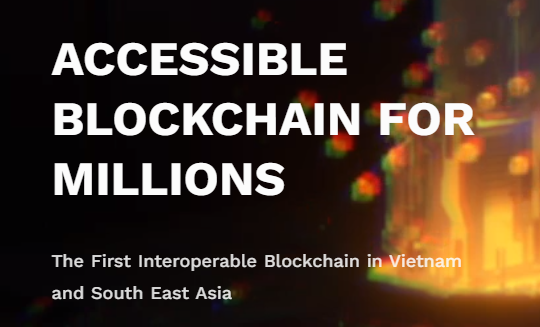 KardiaChain provides vital cross-chain communications between public or private blockchains. Users enjoy more functionality thanks to these features. They can leverage the scalability and low fees of one blockchain while taking advantage of the security of another.

Another major concern for KardiaChain developers is investor confusion. It was crucial for developers to create an easy-to-use interface as part of their business model. This approach simplifies adoption and improves cooperation.

There are many benefits KardiaChain brings to the market. For one, it accomplishes cross-chain compatibility and interoperability via non-invasive technology. These protocols enable data communication in a trustless and secure manner. The network combines a custom-built blockchain, an advanced cryptocurrency, developer tools, and much more to provide a better user experience. 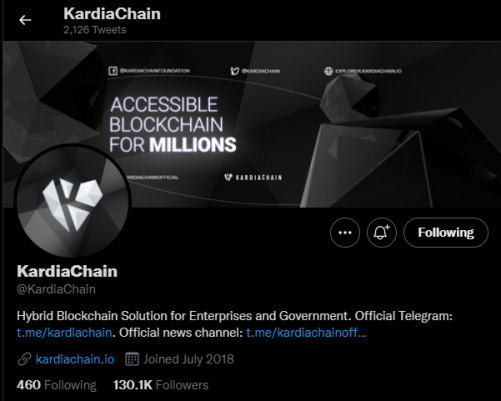 Another major benefit provided by KardiaChain is its low transaction fees. The network leverages a Proof-of-Stake consensus mechanism to reduce blockchain congestion. Notably, the system offers rates as low as 0.0001 USD per transaction.

Its vital for today’s blockchain to be upgradeable. KardiaChain leverages machine learning to self optimize the protocol. The network can optimize costs, reduce congestion, and provide secure cross-chain communication to blockchain users.

Security is another area that KardiaChain excels in. The network’s BFT DPoS consensus mechanism retains high transparency across multiple networks, regardless of the protocol. This transparency allows developers to create more open and democratic Dapps and features.

How Does KardiaChain (KAI) Work?

KardiaChain operates as a hybrid smart inter-blockchain ecosystem. The protocol’s main feature is its proprietary blockchain that enables developers to create cross-chain applications in a streamlined manner. The protocol removes many of the technical barriers from blockchain integration. As such, KardiaChain has seen continued adoption in the commercial sector.

The ELASTIC SHARDING WITH INCENTIVE MECHANISM (ESWIM) is one of the core protocols of the network. This system helps to improve performance and raise security. To accomplish this task, the mechanism can adjust certain criteria such as altering the block reward distribution.

This strategy enables Ethereum developers to convert their applications to the KardiaChain ecosystem with zero recoding. As such, more applications have made the migration or added the network to their systems as a low-cost alternative.

The KardiaChain blockchain utilizes a Delegated Proof of Stake (DPoS) consensus mechanism. This BFT (Byzantine fault-tolerant) system provides more scalability than a traditional Proof of Stake system. To accomplish this task, DPoS systems reduce the number of users who validate transactions. Users nominate these nodes by staking their tokens to them.

In a DPoS system, the delegator nodes and stakers receive rewards for their participation. These rewards come in the form of the platform’s utility token, KAI. These rewards can then be staked which creates a self-generating reward loop. In this way, KardiaChain users gain access to low-risk passive income streams.

Another unique feature of KardiaChain is the use of dual nodes. A dual node can monitor actions on KardiaChain and another network at the same time. These nodes are what power the cross-chain capabilities of the protocol. 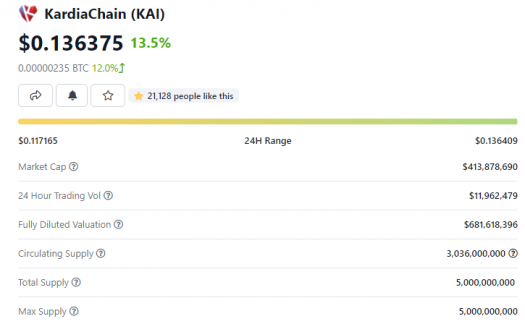 KAI is KardiaChain’s governance and utility token. This token operates as a flexible digital asset that serves multiple roles within the system. You can use KAI as a cryptocurrency. Users can stake this token to earn rewards as well. Staking is a great way for new cryptocurrency users to secure rewards without the need to monitor or learn the market conditions. Compared to trading, staking provides more consistent returns and far less risk. As such, staking protocols are one of the most popular features found on fourth-generation blockchains.

KardiaChain (KAI) users have the ability to decide the future developments of the network. They can put forth proposals regarding everything from fee changes to adding new features. The community then votes on these proposals. Users must hold KAI to gain voting and proposal rights. The more KAI you possess and the more weight your vote holds. This strategy ensures that those who are the most vested in the network have the most say.

The KRC-20 token standard is KardiaChain’s answer to the popular ERC-20 token protocol. Developers can create KRC-20 tokens to power new markets and applications. These tokens provide more efficiency and lower transaction costs when compared to the Ethereum network at this time.

How to Buy KardiaChain (KAI)

KardiaChain (KAI) is available on the following exchanges:

Gate.io – This exchange was established in 2013, and is one of the more popular & reputable exchanges. Gate.io currently accepts most international jurisdictions including Australia & the UK.  USA & Canada residents are prohibited.