Investing In Efinity Token (EFI) - Everything You Need to Know - Securities.io

Connect with us
Efinity Token 101:

The Efinity Token (EFI) project operates as an NFT-focused (non-fungible token) infrastructure. The protocol was built to connect multiple networks via an immersive 3D metaverse that enables users to create, transfer, and purchase NFTs at ease. As such, the network has captured the attention of traders and gamers alike.

The Efinity Token was developed by Enjin. The protocol is just one part of the larger Polkadot parachain ecosystem. Parachains leverage the scalability and security of Polkadot. They can be set up to meet criteria and can have their own consensus, governance, and tokens when required. Efinity is a Polkadot parachain developed to meet the specific needs of the NFT community. 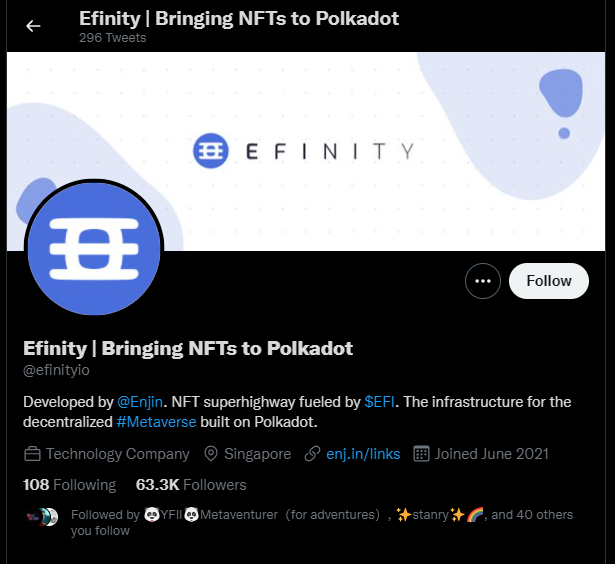 Efinity was built to help alleviate some concerns faced by the NFT community. For one, the system was designed to be simplistic in nature. This approach helps with NFT onboarding. The project streamlines the most frequent NFT processes including the creation of these unique digital assets.

High fees are another issue that Efinity Token users are able to avoid. The network provides some NFT-centric fee options such as the fee payer signature. This option enables companies and creators to subsidize transaction costs for users. To accomplish this task, the issuer assigns responsibility for fees before broadcasting.

Earlier generation blockchains were limited in their programmability. Networks like Ethereum have been plagued by inflexible smart contracts which limit developer creativity. Efinity integrates a universal smart contract framework. This system ensures that all smart contracts execute efficiently within the Polkadot ecosystem. This strategy enables developers to create Dapps that operate across a variety of Parachains as well.

The current state of the NFT market is very disjointed. There’s a myriad of projects operating as separate networks with little or no ability to communicate data and value between these islands of information. The Efinity system provides superior interoperability. The protocol is set up to accept other network’s tokens via the use of advanced cross-chain bridge protocols.

There are a lot of benefits that the Efinity Token (EFI) brings to the table. For one, it expands the framework and economic functions of the Polkadot ecosystem. Additionally, it builds on the Polkadot Relay Chain via its independent, decentralized, and transparent Metaverse structure.

Efinity users can secure rewards for their participation in multiple ways. The protocol was designed to compensate all network participants using its native token, EFI. Specifically, buyers, sellers, NFT creators, collectors, users who participate in the governance system, and network nodes all gain access to rewards based on their level of contribution to the network.

You can also secure rewards by staking EFI tokens. Staking is a great feature for both new and experienced users because it requires very little workload and produces consistent rewards. When you stake your tokens, you agree to lock them in a network smart contract for a predetermined time. The more tokens you lock up, the higher your reward payouts. 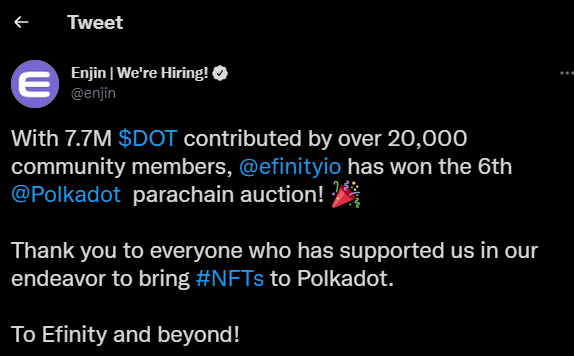 One of the main concerns for Efinity’s development team was to ensure the protocol was scalable. Efinity achieves this goal with 6-second confirmation times and the ability to handle 1000 transactions per second. In comparison, Ethereum, the largest NFT blockchain in the world, can only handle around 15 transactions per second.

Efinity also provides more privacy than earlier blockchains. The protocol supports the use of Discrete Accounts. Discrete Accounts are special wallets that are not associated with any private key. The network utilizes this technology in multiple ways. For example, the system has a feature called fuel tanks. Fuel Tanks are special discrete accounts that are used purely for transaction fees. Their main purpose of fuel tanks is to subsidize NFT transactions for users.

The Crafting Features option is an easy way for users to create new tokens. Rather than starting from scratch, you can take already preset NFT factors to speed up the creation process. Crafting is especially helpful to game developers because they can create multi-step NFT creation processes. For example, imagine that you need to acquire the gold, wood, steel, and labor NFTS in a game to craft a sword NFT.

How Does Efinity Token (EFI) Work

Efinity is a Polkadot-based fourth-generation blockchain. The protocol leverages the latest blockchain technology to bring together NFT creators, traders, and collators in a secure and responsive way. These users can create, purchase, sell, and trade their NFT collectibles using the protocols cross-chain infrastructure.

Paratokens are digital assets specifically designed to interact within the Polkadot and Kusama ecosystem. These flexible digital assets are 100%compatible with Parachains, Parathreads, and smart contracts. Developers can create Paratokens that can be staked, traded, or that must meet specific regulatory requirements to transfer. As such, Paratokens empower developers to create more helpful Dapps across more markets.

The Efinity Marketplace is where users meet up to trade tokens, NFTs, and share ideas and concepts. You can show off your collection or trade for other NFTs in a direct peer-to-peer fashion using this feature. Efinity users can also trade their in-game assets for other popular cryptocurrencies. The market enables users to unlock their gaming efforts and convert their in-game assets to real-world profits.

Efinity blockchain is a parachain that uses Polkadot Relay Chain Validators for its consensus. The protocol also leverages special-purpose collator nodes that are responsible for processing transactions and running instances of the virtual machine. To qualify as a validator, you need to stake 2,000,000,000 EFI. Notably, network nodes can have their rewards slashed for poor performance or malicious behavior.

EFI operates as the main utility Paratoken on the network. This token can be used for paying fees, purchasing assets, staking, utility, and governance purposes. You can send EFI globally in seconds.

How to Buy Efinity Token (EFI)

Efinity Token (EFI) is available on the following exchanges:

Gate.io – This exchange was established in 2013, and is one of the more popular & reputable exchanges. Gate.io currently accepts most international jurisdictions including Australia & the UK.  Canada & USA Residents are prohibited.

Huobi Global – Established in 2013, Huobi Global has since become one of the world’s largest digital asset exchanges, with an accumulated trading volume of US $1 trillion.  It should be noted that Huobi Global currently does not accept USA or Canadian residents.

Enjin’s Efinity continues to see growing adoption in the market. Notably, the protocol recently won Polkadot’s sixth and last parachain auction for 2021 and now has over 70 ecosystem partners. These reasons and the excellent feature set provided by Efinity make it a strong contender in the budding NFT market.