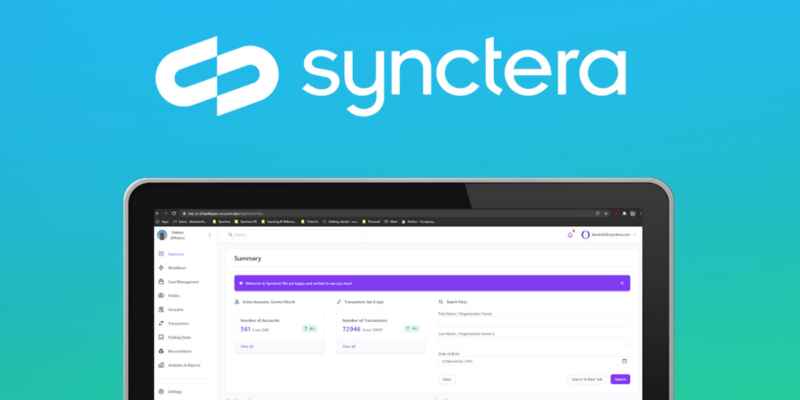 Synctera, a fintech that provides Business as a Service (BaaS) tools to connect community banks with fintech companies, announced today that they raised $33 million in Series A funding. Fin VC led the new round of funding and was joined by new investors Mastercard and Gaingels. In addition, investors from previous rounds of funding returned, including Lightspeed Venture Partners, Diagram Ventures, SciFi Ventures and Scribble Ventures. To date, the company has raised over $45 million in just under a year. In this news release, Synctera also announced that they are joining other fast growing technology companies in the Cap Table Coalition, which pledges to meet a goal of having 10% of investors in each funding round being from traditionally marginalized investors.

CEO Peter Hazlehurst, along with co-founders CTO Kris Hansen and head of product Dominik Weisserth, started Synctera as a way to address a major need in the community banking sector. Smaller banks often do not have the ability or technical skills to form partnerships with fintechs due to the associated operational complexities. To meet this need, Syncera has created a “partnership banking marketplace” to match up community banks with fintechs. By doing a lot of the time-consuming work, Syncera allows partnerships to form that meet the needs of both parties. By working with the community banks to discuss topics like their business goals and geographic area of operations, a personalized relationship between the two sides is created. For fintechs, the benefit lies in the platform’s ability to reach a large number of banks. For newly established fintechs, having a network of potential clients for your product can be extremely beneficial for growth. In addition, their platform also offers the ability for the community banks to easily manage relationships with multiple fintechs through a single window approach. Hazlehurst, who has previously held roles as head of Uber Money and Google Wallet, has stated that the company’s goal is to reduce the average amount of time it takes for a community bank to get set up with a fintech company from 10 months down to 20 days.

Despite being just over a year old, Syncera has already seen massive amounts of interest and success. The company originally set a goal to have 15 banks set up using their service in 2021. So far, over 40 banks have already demonstrated interest, with 3 signing on as partners and another 3 anticipated by the end of this month. In addition to this, 60 fintechs have already partnered with Syncera and showed interest in using their service to connect with community banks. With this new round of funding, Syncera is going to focus on onboarding a new cohort of fintechs that offer card processing services so that banks have access to products such as  debit cards, lines of credit, overdraft, back-end automated billing and remittances. The company currently employs around 50 people, and plans to scale up to 150 employees by year’s end.